Excerpts from Nobody Hates Trump More Than Trump: An Intervention, (published by Thought Catalog, October 2018)

Hannity: Numbers keep going up, up, up.

Trump: Hey, buddy, how are you?

Hannity: How we doing on that other project?

Trump: We’re doing good. Always doing good, you and I.

Hannity: When can we get together on that?

Trump: In November. Listen, you might ask me if I’d vote for [Jeb] Bush. Ask me that and I’ll give you a positive answer.

Tech: Here’s a mic for you.

Trump: Not on the tie.

Tech: You need this to hear Fox and Friends in New York.

Trump: I want to talk to Steve.

Doocy: We’ll all have a conversation.

Tech: You got it.

Trump: Steve, tell him to watch the hair.

Dana Perino: You know how people say Hillary should make herself more likeable? No one says that about Ted Cruz. He’s the most disliked person in Washington. He can’t get anyone to second one of his motions. But no one says he should be more likeable.

Megan McCain: They like him in Iowa.
Perino: They do.
McCain: What about Rand Paul? Aren’t they friends?
Perino: They had a falling out.
McCain: A true evangelical.
Perino: God, I don’t know what I’d do if it came down to Trump and Cruz. I’d vote for Hillary.
McCain: God.

Perino: Would your dad be Vice-President if someone asked?
McCain: No. He’s over all that.
Perino: Yeah.
McCain: Kerry asked him; he said no. That man can’t be anyone’s number two.

A Fox News source tells me, “On air, the talent says the Michael Wolff book is a pack of lies; off-air, they say it sounds just like the DJT they know. It’s pro wrestling. The talent is like an overinvested actor: ‘My character would say X about Y, would be for P in case of Q, is a family man, cares about sports, etc.’ Backstage, the real person is available, unless the talent is a method actor and therefore always in character.”

Hannity: My daughter plays soccer. The all-county final: They bring in this girl from Ukraine. The other team.

Hannity: And this girl’s like 6’1″. Total pro. In the country 4 months. Can’t even speak English. I try to talk to her; she doesn’t even look at me, looks at the interpreter.

Hannity: The news [the Paris bombings] is breaking in your direction.

Trump: It’s terrible what’s happening. You saw the polls? People are scared. They feel safe with me.

Hannity: God, you must be tired.

Rand Paul: I exercise all the time—train. You must be a black belt by now.

Hannity: Brown. I take my test in a year. Maybe.

Hannity: You know, I broke my finger.

Hannity: Sparring. We weren’t supposed to hit in the face. Guy dropped his head: crack; blood everywhere. It was like a murder scene. Finger is destroyed.

Hannity: God, I hate Colbert. He is such an asshole.

Paul: I don’t think he gets the whole Libertarian thing.

Hannity: Just don’t do The View.

Paul: Did The View, with Whoopi Goldberg. It was okay.

Hannity: Last time I was on that, I got into it with Rosie O’Donnell. Fuckin’ asshole. Never again, I said.

Hannity: He was really on his game today.

Producer: He was great.

Hannity: [imitating Trump] “Nobody builds a better wall than me. Nobody builds better buildings.” Yeah, sure. They’ll just crash a plane into the wall and climb over.

August 2016, Milwaukee, mid-day, outside the Pabst Theater, where later in the evening a Fox News Town Hall will feature Hannity, Trump, Sebastian Gorka, Sheriff David Clarke, and several family members of Benghazi victims. Now, a Fox technician has a conversation with Lisa, a local senior citizen and security volunteer; off-air—

Lisa: I told you it was a beautiful theater.

Tech: You were right.

Tech: What have you seen that you loved?

Lisa: Oh, Heart. Heart came through just a while back. I love Heart.

Lisa: Lisa Marie Presley was here. She looks just like her dad.

Tech: The schedule says she’s back in September.

Lisa: Don’t I know it. I’m gonna volunteer to work that show.

Lisa: You bet. She should sing more of her dad’s songs, though.

Four children, led by two adults, walk by. All the children are under ten—white, middle-class in appearance. The mother is white; the father is black.

Lisa: Did you see that nigger with them kids? 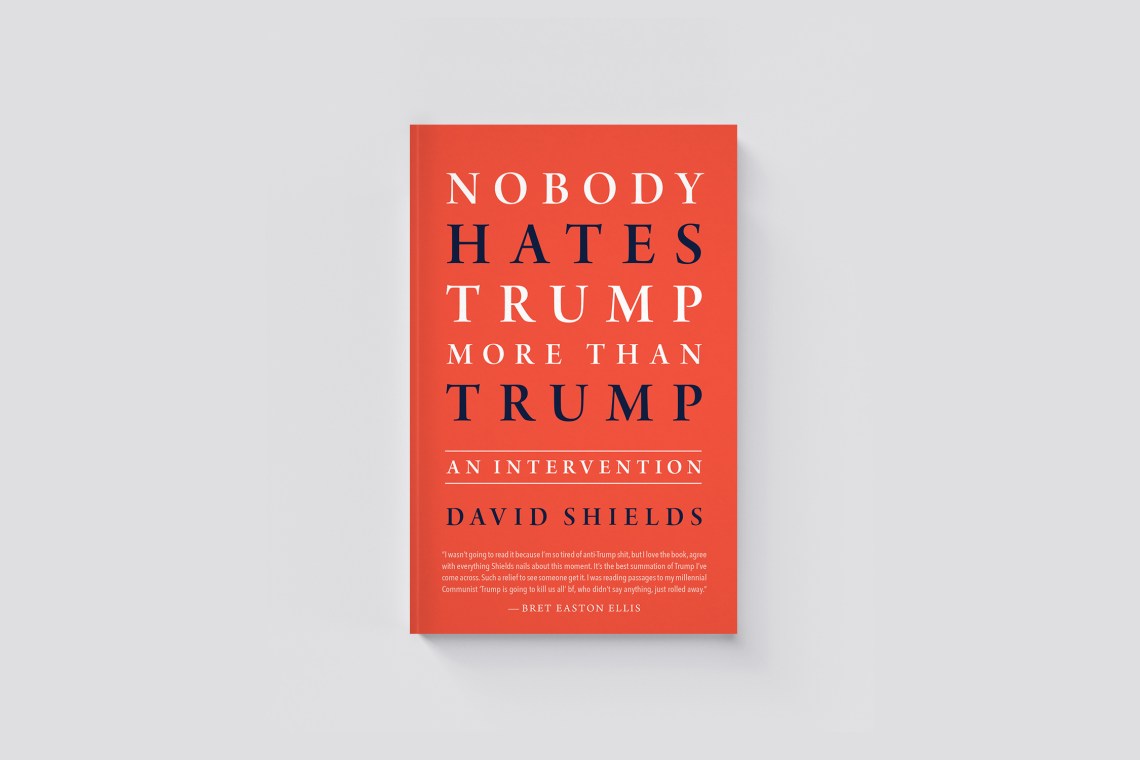 In his new book, Nobody Hates Trump More Than Trump: An Intervention New York Times bestselling author David Shields deconstructs the idiot-savant-autocrat at 1600 Pennsylvania, his fan-fiction base, and the emotional needs/moral failures of the city, country, and world that created him.

Nobody Hates Trump More Than Trump is at once a psychological investigation of Trump, a philosophical meditation on the relationship between language and power, a satirical compilation of the collected wit and wisdom of Donald Trump, and above all a dagger into the rhetoric of American political discourse—a dissection of the politesse that gave rise to and sustains Trump. The book is organized into six chapters and 60 subsections and gets increasingly harrowing in its focus, moving from childhood to sex to media to virtue-signaling to chaos theory to “apocalypse always.” The book’s central thesis is that we have met the enemy and he is us. 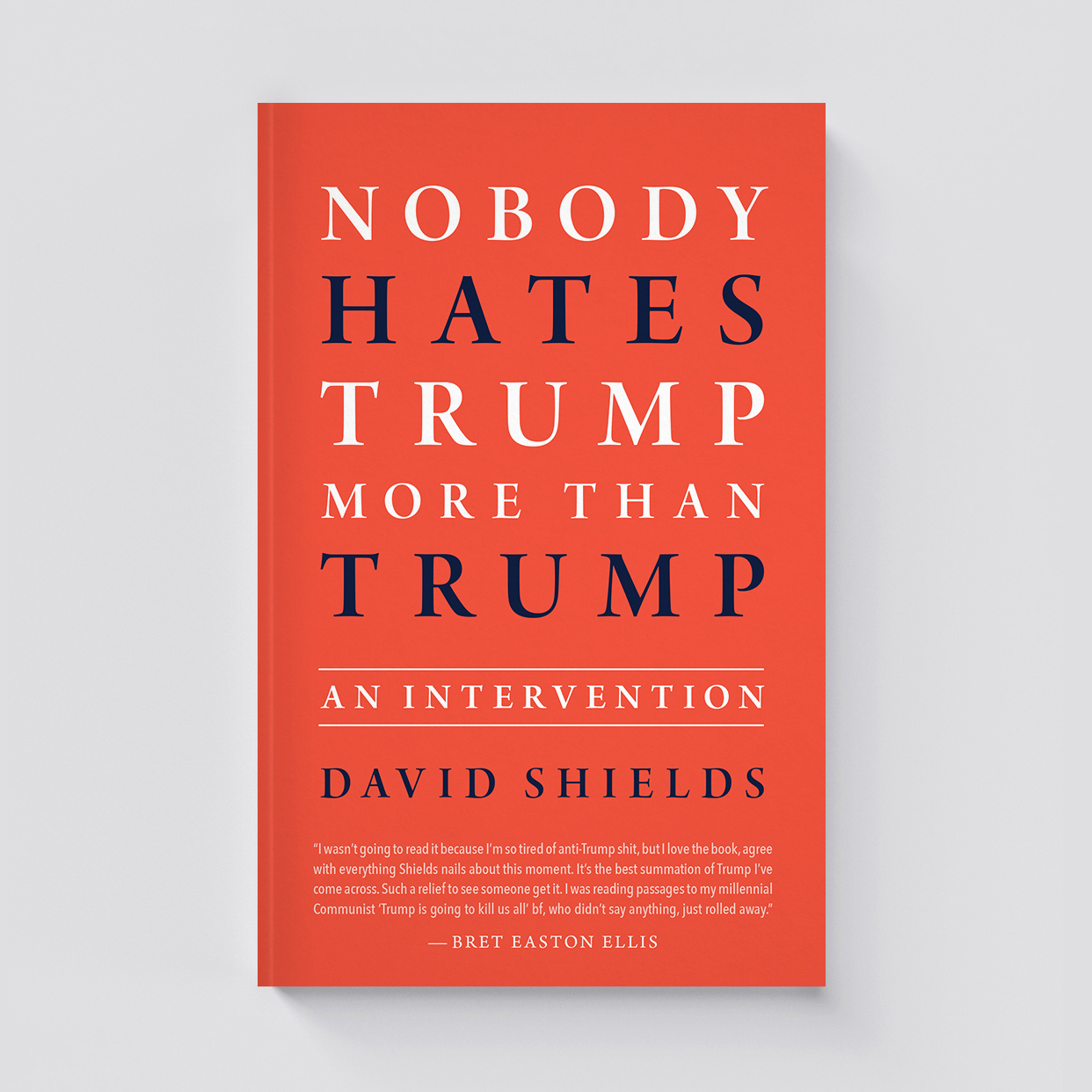 The World Vs. Brett Kavanaugh and Donald Trump

How We Talk About Trump

Did Melania Trump Just Steal A Plot From ‘The Bold Type’ To Pull One Over On Us?