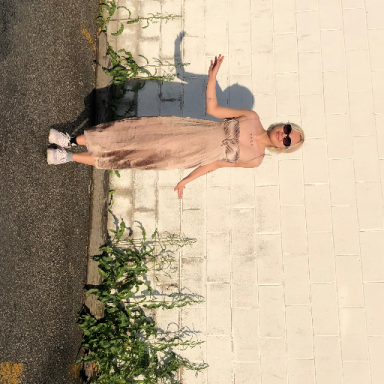 I have an image in my mind, of that one Kirby meme. He’s pointing a stick at a projection screen that reads Cringing at the past just means you improved as a person. His eyes are closed. He looks good.

When I look at my past, I don’t just cringe. Some days I want to delete my whole existence because of it. I heard it gets easier with time and age, making mistakes and shit. I’m waiting patiently, trying to learn how to look in the mirror and pray that someone respectable looks back one day. I’m trying to show compassion and kindness toward myself first so I’d have a slight clue on what it would even look like if I were to show it towards another person.

And frankly, I never understood the concept of treating other people how they want to be treated. If people treated me the way I wanted to be treated even 3 months ago, I wouldn’t be very happy. But then again, perhaps it would’ve been just what I needed – so who knows? But then again, I wouldn’t want to treat anyone poorly even if that’s what they think they want. What if my poorly was their enough? Who am I to say that I’m more right than anyone else? And who am I to assume anything anyway? Being caught in this loop, I learned that I didn’t want to blindly treat people in ways that I didn’t understand first. I had to learn for myself what it meant to be “treated well”. Then at least I could write Lived Authentically on my grave. Or something like that.

Have you ever struggled to see where you ended, and the rest of the world began? Felt like life was a performance? Like you were just a combination of your achievements and shortcomings?

Have you ever believed in an awful thing about yourself? Has your memory ever failed you? I’m careful about using the F word but language will always be limiting, I’m afraid. Has fear ever seeped out of your skin – a blue black liquid? You tried to wash it off but then you started to bleed and decided never again.

It’s human nature to be imperfect, and I found it extremely painful to be human.

I had dug myself a shame grave. That’s what I call these – when I’m being hard on myself but don’t have the guts to believe that I can change. Being a perfectionist with a fragile ego is probably one of the worst ways to kill your confidence and happiness. Or the best – depends how you look at it.

It meant I’d have to face all of the ways I’d been less than kind towards myself and others. All the ways I’d been fearful and critical of my own reflections that I observed in others. It was as if I was completely oblivious to the fact that I’m actually alone in my brain. We all are. Just perceiving and aging. No knowledge in the world will ever bring me certainty about how another person is perceiving themselves and their own lives. There’s more to everyone than I will ever know. There’s more to me than I will ever know.

It’s humbling. It leaves more room for compassion, I think. Or maybe compassion makes that room. Chicken or the egg? Life stops hurting when I focus less on being perfect or the best, but rather on being curious and openminded. It makes me value learning and being open to new experiences. I feel more grateful to be alive. I value myself as I am. It’s strange, because it’s only when I stop expecting so much from myself, that I begin to change for my better.

I believe uncertainty and fear are required to be present for courage and curiosity to exist. Compassion softens the edges a bit, just enough for me to see growth as a possibility again. Which makes me think about how I can’t control anything but myself. Any type of catalyst that brings on change that will matter and be fulfilling must be something that inspires me. That’s how I know that I’d never want anyone to change for me, because I could never do such a thing in return.

And if someone shows you how they want to be treated and you cannot perform to those expectations, wouldn’t you rather just walk away? It’s not personal. It just isn’t worth it.

It’s hard when you love someone. But I wonder if whatever I’m being drawn to or am loving is something I already have within myself, begging to be unearthed. I call these divine encounters. Sheer luck, maybe. Where you feel yourself wanting to change for another, but underneath it, you are actually becoming more like your authentic self. But sometimes you really just can’t tell. I think that’s when patience comes in.

Because I will never know what it’s like to be somebody else, so I might as well sit with myself long enough to see who I truly am. What do I value? What does it mean to value and be valued in my perspective? Then I’d see that I have all the answers already.

Every time I wake up god lights a blunt and the devil starts cleaning.