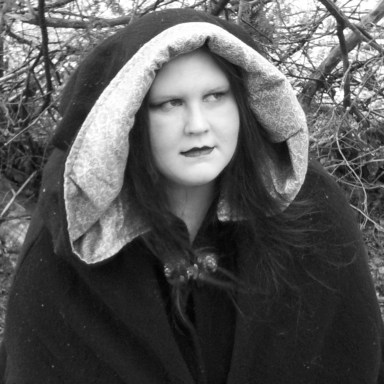 There is a myth that horror is a genre that only men and boys read and write. I think this partially stems from an outdated idea that women cannot handle blood and violence. Talk to anyone who has given birth, and I think there isn’t any question as to the level of blood and violence women can stand.

That being said, let’s start acknowledging the fact that just like any other genre, horror is for anyone who likes it. But I’m going to go a bit further—so far, in fact, that I will say I don’t think horror would be a genre without women. Before we go there, let’s take a couple steps back.

George Balanchine, the famous choreographer and co-founder of the New York City Ballet, used to say, “Ballet is woman.” He wasn’t wrong. However, Baryshnikov came on the scene and kind of blew all of that out of the water. No longer did people think of Pavlova and Fonteyn when one mentioned ballet—they thought of Nureyev and Baryshnikov with their high jumps and good looks.

There would be no classical ballet without women, but men had their place, too. The focus simply changed.

Now, I imagine you are wondering what ballet has to do with all of this. It is an example of what happens when you take a time-honored tradition and begin to pay attention to what wasn’t quite evident before.

Think back to the earliest scary story you can think of. Whether vampires, ghosts, or even Frankenstein’s monster himself, almost every horror story has a scene where a girl gets attacked and screams when the monster creeps up on her. The feeling of suspense is aided by this and helps to amp up the terror. Without women, a horror story is as stale as a day-old donut.

Some will also argue the use of sex and violence used in horror films and books are just graphic and commonplace objectification of women. If you take the time to watch western TV shows of the 1960s and compare them to horror and sci-fi shows of the time such as The Twilight Zone, you will quickly see that rape is a common theme in the westerns—including torn dresses. Very little of that in The Twilight Zone, where each episode was meant to teach a lesson.

I would make the argument that for today’s books and movies, rape is used as a device much more commonly in high fantasy like George R. R. Martin’s Game of Thrones than in any horror novel.

Horror gives women power. In terms of launching women into careers, horror does that well, too. Actresses such as Vanessa Redgrave, Maureen O’Hara (she was in The Hunchback of Notre Dame when she was a mere nineteen years old), Jennifer Aniston, and many more got their start in horror movies.

In literature, Mary Shelley is a legend. At this point, so is Anne Rice.

No decade was stronger for women in horror than the 1970s. That was the golden age of the scream queens: Barbara Steele, Jamie Lee Curtis, and Karen Black. They inspired 1980s counterparts such as Linnea Quigley and Heather Langenkamp.

Horror literature is directly influenced by film, too. The more popular horror is on the big screen, the more women are inspired to write stories that go a bit further than others are willing to go.

There is no way to separate women from horror. They have a symbiotic relationship. Without them, you would repeatedly have men running at the monster with no drive, no history. It would be like a gif repeated over and over: funny the first time, but less memorable with each pass.

Horror is woman. She is the black widow ready to take out any that cross her path. And, who knows, if you are lucky enough, it could be you.

Named one of the Examiner’s "2014 Women in Horror: 93 Horror Authors you Need to Read Right Now," Danielle DeVor has ...

The Most Bingeable True Crime Doc In Recent Memory