On November 1st, highly respected organization the Pew Research Center released a poll on how Trump voters and Clinton voters see one another. The poll broke things down by demographic response as well, as Pew polls often do. Given the common invective of this campaign season you would be forgiven for believing that Hispanic Clinton supporters might have a lot of anger towards those Americans currently supporting Trump. However, you’d be wrong.

But first let’s look at the larger picture. Pew conducted this poll between October 20th and 25th, not long after the Access Hollywood hot mic recording of Donald Trump engaging in “locker room talk”, as Trump later described it, with Billy Bush. Additionally, the poll was conducted after Trump had been repeatedly accused of sexual assault.

But once you dig into the demographics of these responses things get even more interesting. 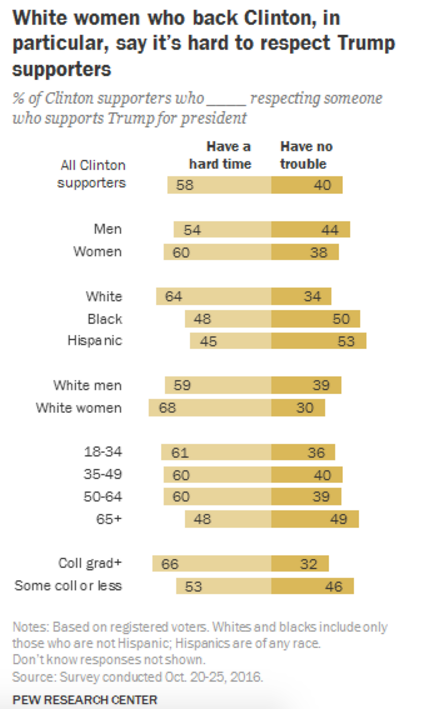 Out of all the demographics polled, it is White women who support Clinton that have the hardest time respecting someone who votes for Donald Trump and it’s nearly uniform until you look at White women over the age of 65.

It’s also exacerbated greatly by education level. White women who are college graduates have the hardest time respecting Donald Trump supporters of any demographic in the country.

Given Trump’s early controversial statements about illegal immigrants that seemed to many to be conveying xenophobia towards Hispanics in general, one might think that Hispanics would have the most difficulty respecting Trump voters.

Additionally, given the opposition to Trump’s campaign by African American groups such as Black Lives Matter as evidenced at Trump’s Chicago rally in March and the support for Trump among some White Nationalists, one might think that African Americans would also have a lot of difficulty respecting Trump voters.

However, these two groups of Clinton voters, Hispanics and African Americans, are the most likely demographic to have no trouble respecting Trump supporters.

Wait, Does Donald Trump Actually Have A Chance Of Winning? (Yes)

I Was Wrong About Trump Voters

According to This Poll, More People Now Support Gay Marriage Than Any Time In History

In Case You’ve Been Distracted: Donald Trump Is Actually On His Way To Being Our Next President

A Letter To Mrs. Hillary Clinton, From A Concerned But Hopeful American