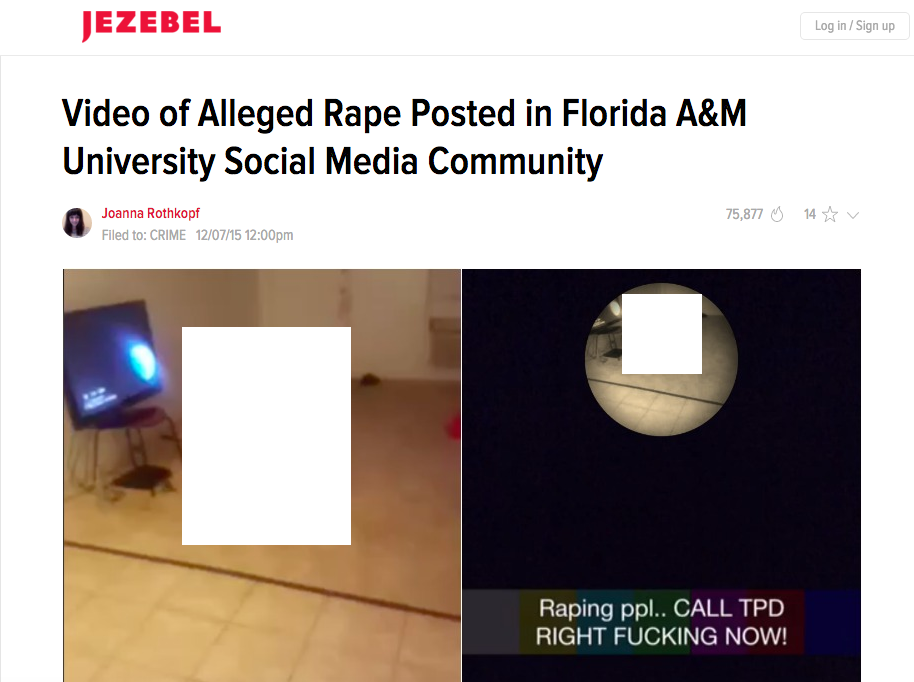 At noon today, Jezebel.com made the decision to pull the trigger on an item about an alleged rape at Florida A&M University that was recorded and posted to the social media app Yeti. As part of that decision, they posted a still from the video as their main image item under a title about a video of rape. Following their format, the main image is almost always a still from any video they or other Gawker properties post, so it’s fair to say that the headline was intended to heavily imply that Jezebel was also posting a video of the rape in the main article.

Mercifully, they had not. However, let’s talk about the thought process behind posting stills of rapes as the main draw for articles on alleged sexual assaults. The key question in making such a decision in this case would be “is it doing any work for the piece? Is it helping the victim or is it just sensationalism?”

As everyone knows, the Internet is forever, and if this was a real rape and not some horrible staged prank, the victim will have to live with the knowledge that a major website published images of her rape right in front of tens of thousands of people—likely more than 100,000—who would never have seen it otherwise. What’s more, the video had already been reported to the police according to Jezebel’s own article. People posting crimes online is hardly new—again, this is according to Jezebel’s own article.

So how is posting a still of the video doing any work at all to help the victim here? Is it, for instance, going to help pressure police into vigorously investigating this? At this point there’s no way to tell, since according to Jezebel’s own piece, the video is already being vigorously investigated as far as anyone, including Jezebel, can tell. From the article:

“The FAMU police department IT person has researched several different ways to ascertain information from the video with negative results,” wrote FAMU’s director of public safety Terence Calloway in an email to Jezebel. “We have reached out to our students, hoping someone or anyone has some information about the video. I have also reached out to other law enforcement agencies asking for their assistance as well.”

“We are doing everything we can to get information.”

If there was evidence the authorities and the campus were not doing their jobs, that would be the time to consider posting this image, not now, not when this case can still be solved without making the victim and her rape famous. Right now the image isn’t doing any work for the victim. It’s only doing work for Jezebel’s traffic.

This doesn’t raise awareness. It permanently harms the victim and allows millions of people to revisit that victimization in perpetuity.

Gawker is a gossip and culture site, but this isn’t gossip and it doesn’t contribute to Jezebel’s cultural mission. Posting this image as the main feature of the article does not do any of the journalistic work that including such an image would require in order for it to be moral or professional to post it. The choice stinks of an ‘end of fiscal year’ viral attempt to bring traffic to Jezebel generally. It compromises what many believe to be one of the site’s core missions, empowering women. If this were my girlfriend, my sister, my friend, I would be crushed by this editorial choice especially when the publication making it had to deal with rape images being posted in the comments section of their own site previously and railed (rightly) against the problem not being taken seriously.

No to this. The first time they did it was too much.

Sexual Assault Survivors Suffer Long After The Attack Is Over