In September of 2001 I was 24 years old. My friend Regina had taken me to the Windows of the World restaurant and bar just two months earlier for my birthday. I’d had some kind of alcoholic drink and stared out the windows at the Twin Towers, imagining the long cable that had been strung between them in 1974. That’s when Philippe Petit balanced on a cable for 45 minutes, hovering over 1,300 feet above the ground in a balancing act that made him immortal. For many, this performance was the ultimate display of nose-thumbing mirth and youthfulness atop the highest and greatest symbols of American capitalism and industry to ever exist, a kind of joy at the peak of empire in both symbol and fact. Even there, in that serious and stolid air above Wall Street there was a child’s joy, undefeatable and living on its own time. When he did this, Petit was 24.

Two months later we all know what happened when the Twin Towers came crashing down. We went to war. Not to sound simplistic, but in retrospect that’s what happened in spite of the months of jingoism and attempts at understanding and grieving that followed the attacks. America was attacked, and justifiable war ensued, as it has before in nations throughout history, as it will in others after I’m long dead.

I went to war in my way as a member of the intelligence apparatus that would try to make sure the real blood-and-sweat guys in the Armed Forces could get their man quickly and we could all go home and lick our wounds and kiss our lovers. But that’s not how it worked out. I stopped being involved in any of that in 2011. I came home to lick new, personal wounds and to find a lover to kiss. In 2012, I took a very good job in my home state and met a woman that I love. Those were both wonderful things and I began the business of living in earnest for possibly the first time in my adult life.

In 2013, I got a call from a friend I hadn’t spoken to in years telling me that a mutual friend of ours had killed herself with her service weapon in Pakistan. I wrote about this at the time, but I’d never known anyone who’d committed suicide, much less anyone who’d committed suicide because of the war. The war. The war. The war. It feels archaic coming off my fingertips, like something some German Duke might have spoken of in 1914 in far-off terms. Then today, September 10th, I visited Ground Zero with Michael Koh for the first time since I’d sat atop the Window of the Worlds dreaming of a Frenchman’s appetite for mischief. Afterwards I ate shawarma. It was raining. These are the things I saw. 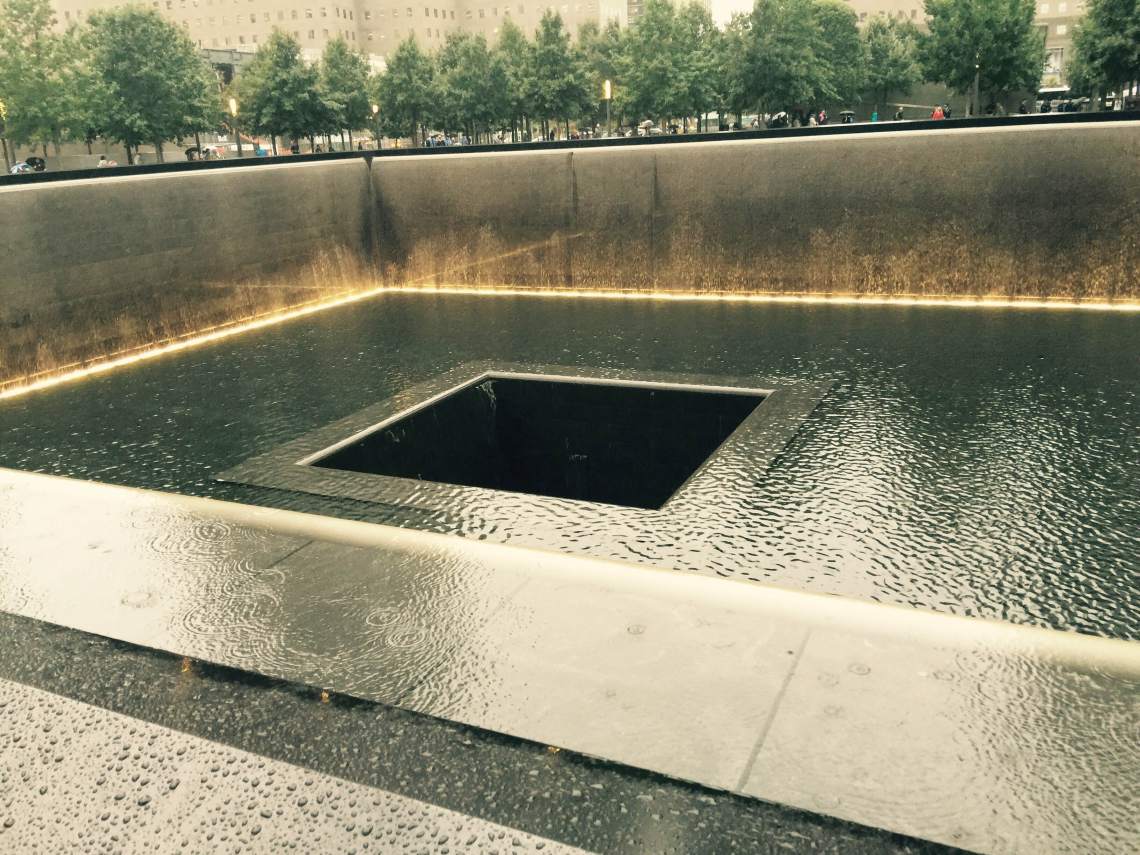 The hole. In many ways I am an emptier person than I was in 2001, though I’m fuller than I was in 2011. But even with my attempt at a homecoming, the good job, and the kiss of a beautiful woman there remains the hole. Behind morning’s rise and evening’s rest there is the hole—whether it is shaped like a bullet for some or a memorial for some or a heart for some, it is and remains the hole. It cannot be explained and it cannot truly be described, only represented.

But then I think again of Philippe Petit, all of 24 and yearning for life unafraid of the 1,300 feet below him, a hole of his very own that was the shape of the entire world. I think of the 45 minutes that he said no to it and to the police and the concerned telling him to worry about himself as he defied gravity and entropy, timeless and immortal. 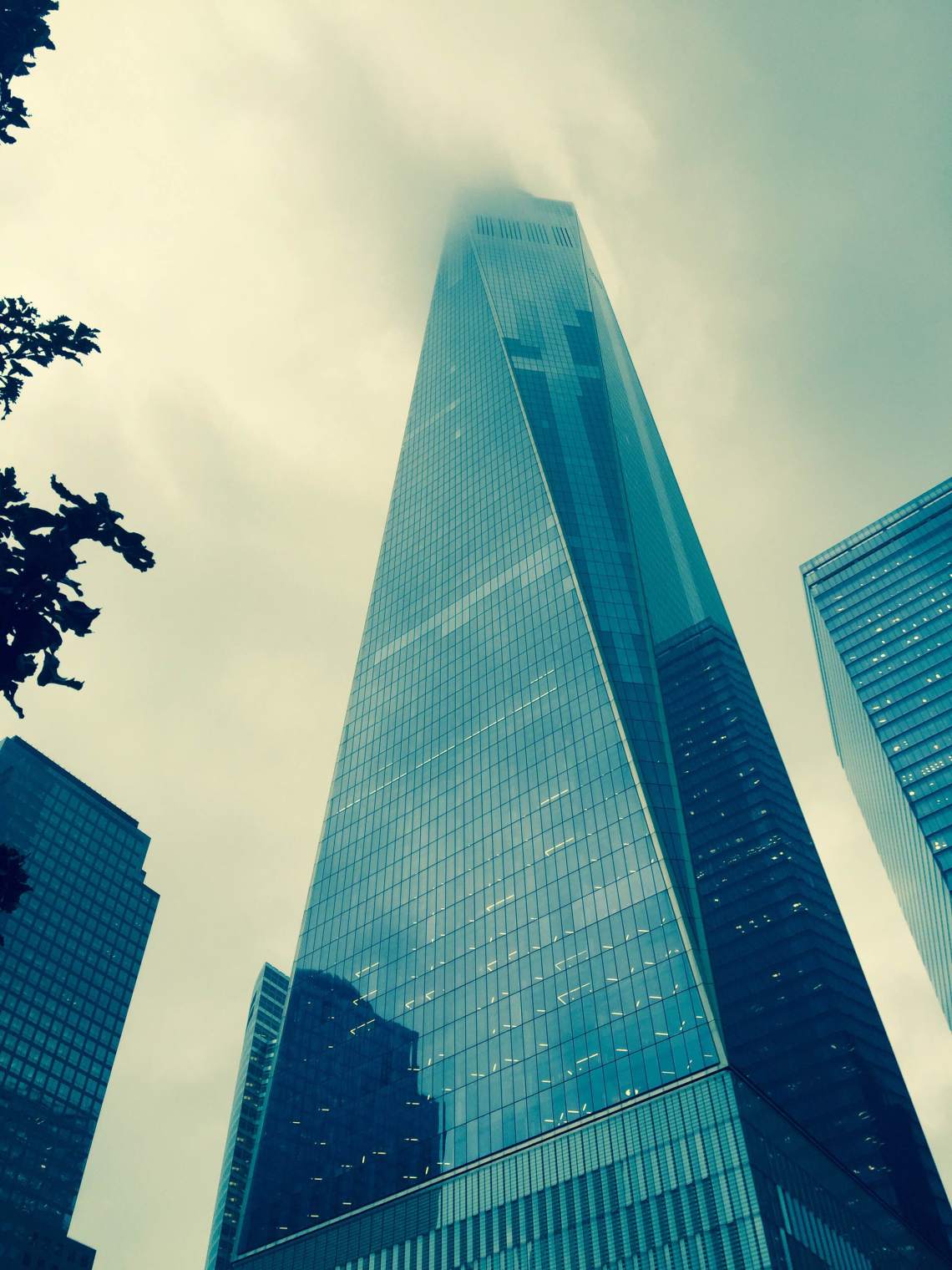 Some days I am the daredevil and others I am simply the man standing over the hole. Some days, many more as time goes by, I am neither.

There is no resolution to this feeling, though, only respites. The tower rises from the ashes and things that seem like they happened only yesterday—things that seem like they’re still somehow happening—continue on their long trek toward history. But in my mind and in the minds of many, these things are still happening. In our minds we’re still preparing and still committing and still trying to make some kind of sense of it all, and in that too we are immortal with pieces of our minds frozen in crystal and always on display for us to ponder and consider.

I know this, all of it, will continue to fade in time. Its importance will shift. God willing, I’ll marry this woman I love and we’ll have children who are beautiful and brave and kind. God willing, we’ll do right by them, but I think that for many of us, even when we’re 90 years old and incontinent there will still be the hole and the towers and none of the answers to our questions will have sufficed. Nor will the deaths of those we’ve known seem worth it. This we now call memory and this others may one day call history.

Play today, play as many days as you can and be as immortal as your heart will let you because all of it, every shard of it, leans toward entropy and all things are falling, slowly, into the hole.

Are We Headed to ‘Idiocracy?’

Why We Need To Stop Self-Identifying And Start Self-Actualizing