Inspiration is great, we all want to be inspired, but there’s a cottage industry out there preying on the hopeful. Here’s 15 quotes that have been misattributed for years and who really said them so you can set your Facebook feed straight. 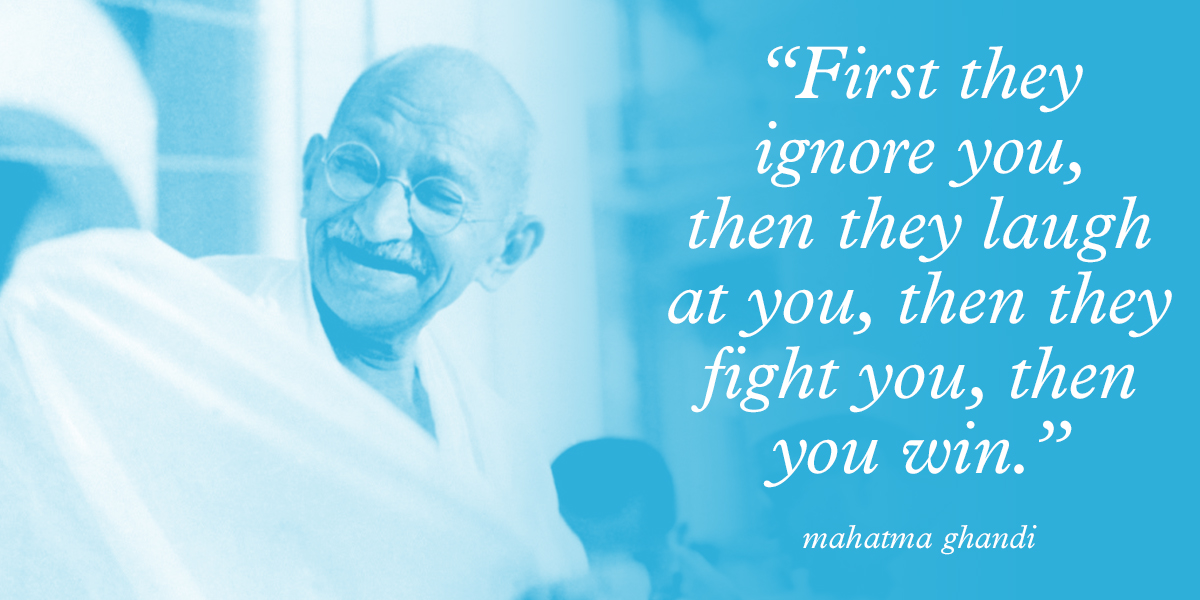 Attributed to Mahatma “the man” Gandhi, Gandhi himself never said this at all. Who they’re really quoting is trade unionist Nicholas Klein who said the following in 1918: “And, my friends, in this story you have a history of this entire movement. First they ignore you. Then they ridicule you. And then they attack you and want to burn you. And then they build monuments to you. And that, is what is going to happen to the Amalgamated Clothing Workers of America.”

But no one knows who Klein is and the original quote is too long for a coffee mug. So, Gandhi gets credit and the quote gets shortened. 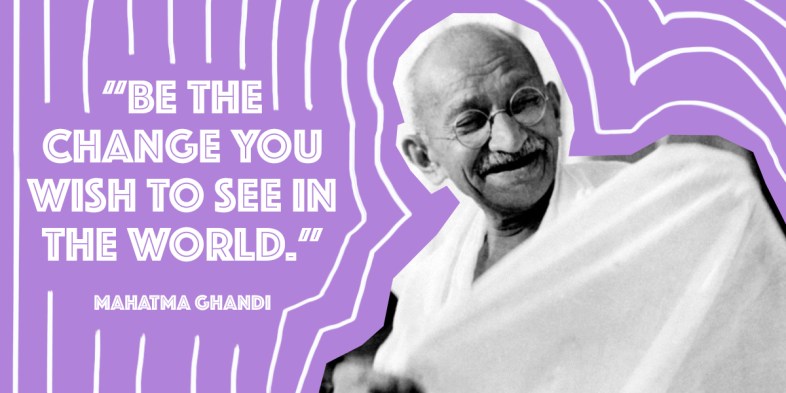 “Be the change you wish to see in the world.”

A beautiful sentiment to be sure but this is attributed to Gandhi and he never said it. Possibly said by his grandson Arun. 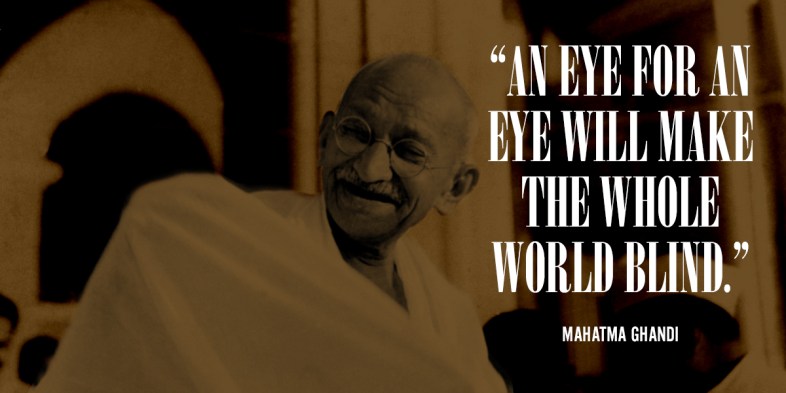 “An eye for an eye will make the whole world blind.”

Attributed to Gandhi however there’s no evidence he ever spoke or wrote these words. The first record of these words being spoken were when Canadian Parlimentarian George Perry Graham was arguing against capital punishment in 1914. I wonder if people would be so quick to quote this if they had to cite a pseudo-obscure Canadian politician at the end of it. Probably not. 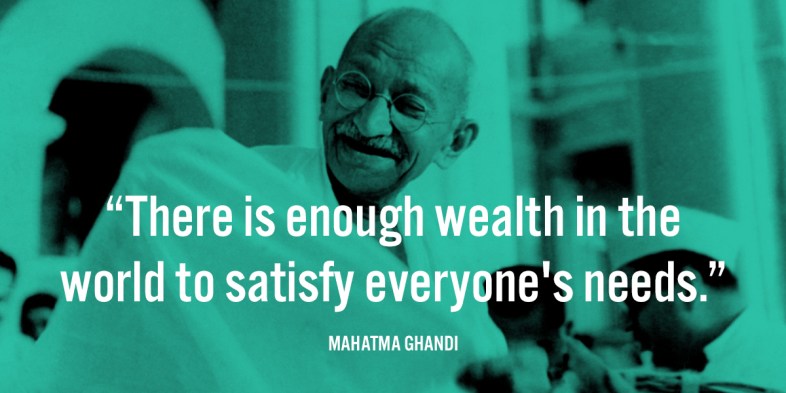 “There is enough wealth in the world to satisfy everyone’s needs.”

Also not Gandhi, actually spoken by Lutheran evangelical and Pastor, Frank Buchman who’s from Pennsylvania, not India. This quote has seen some changes over the years and now sometimes appears as… 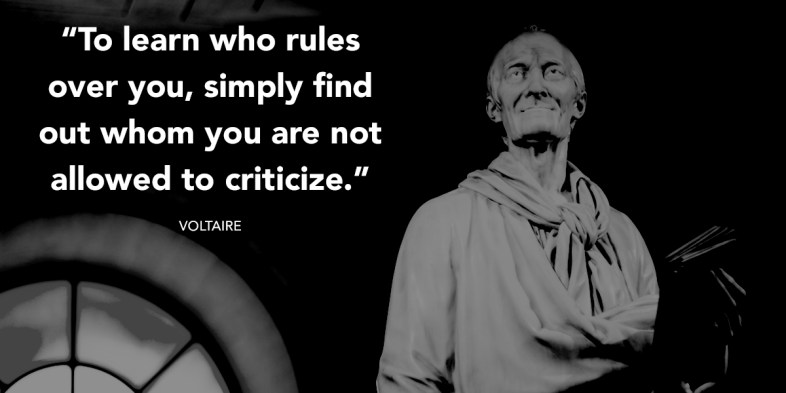 “To learn who rules over you, simply find out whom you are not allowed to criticize.”

Attributed to Voltaire, I picture this quote being shared by people who think they’re fighting shadow fascism or perhaps multi-national corporations while also trying to show how well read they are. Surprise, you’re actually signaling you might be a Jew-hating Neo-Nazi who’s well versed in Kevin Strom literature. I’m convinced this was an intentional trick by ultra-right wing nutsos who wanted to see if they could trick liberals into agreeing with White Nationalist literature or maybe it was 4chan. Surprise, they could. 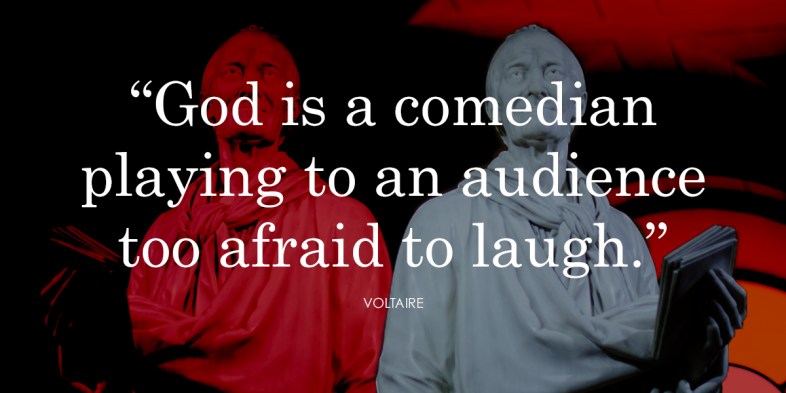 “God is a comedian playing to an audience too afraid to laugh.” 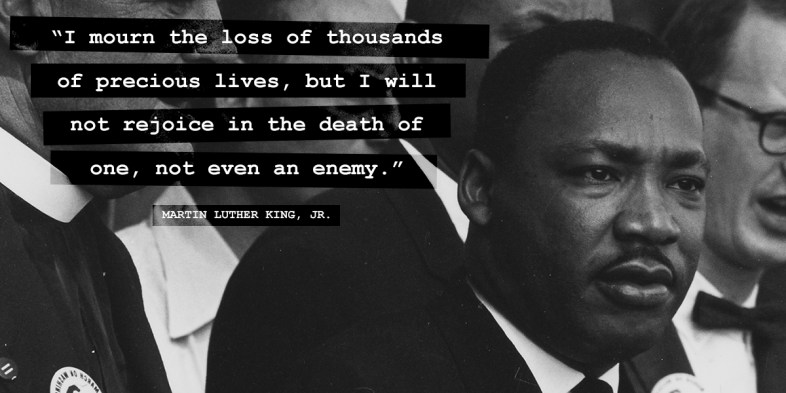 The full quote as you may seen it is this: “I mourn the loss of thousands of precious lives, but I will not rejoice in the death of one, not even an enemy. Returning hate for hate multiplies hate, adding deeper darkness to a night already devoid of stars. Darkness cannot drive out darkness: only light can do that. Hate cannot drive out hate: only love can do that.”

It’s the first part that’s gotten handed around though because it’s shorter and to the point. It was also never said by King at all, ever. It was actually said by Jessica Dovey who’s just a person on Facebook. 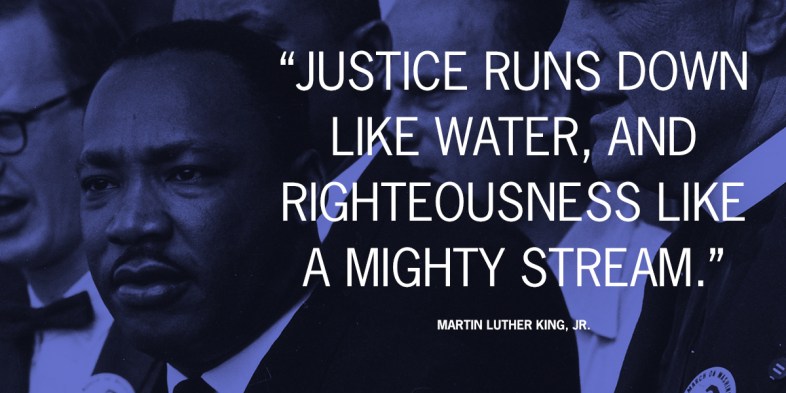 Attributed to MLK as well and while he did speak these words in speeches he didn’t make them up. They’re from the Bible, specifically Amos 5:24 in the Old Testament. The Civil Rights Memorial in Alabama, it seems, didn’t get the memo. 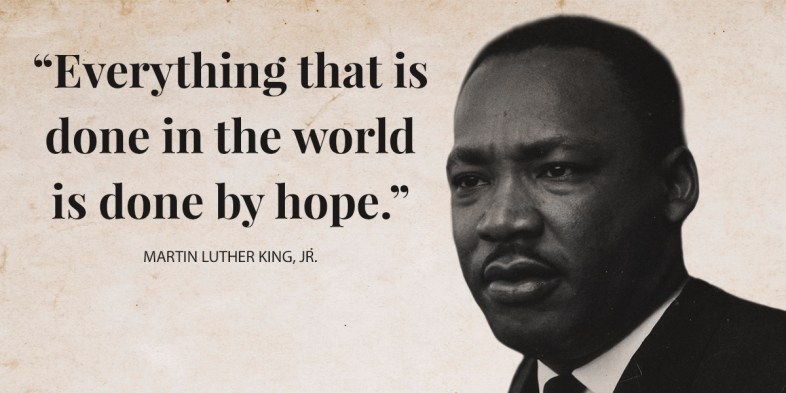 “Everything that is done in the world is done by hope.” 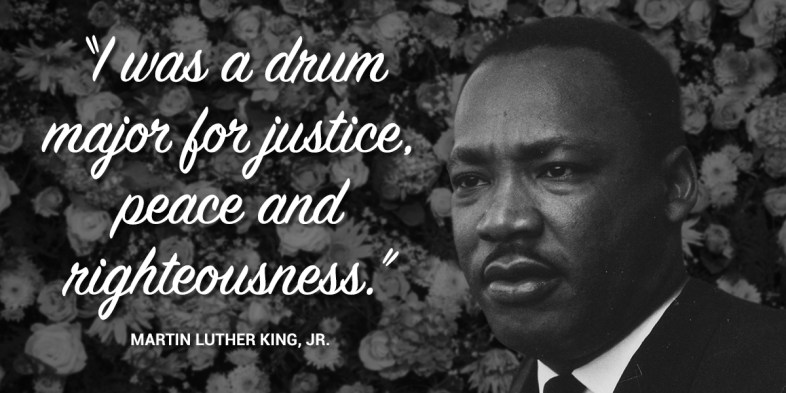 “I was a drum major for justice, peace and righteousness.”

While not exactly a misquote, this sentence was taken out of context by the architect of the MLK memorial in Washington, DC and apparently engraved on the memorial because of space issues. Within the context of the speech from which the quote is derived it’s easy to see that King’s intention wasn’t to characterize himself as being some Civil Rights fighting machine but was actually about the importance of shunning celebrity, self importance, and being a braggart. The quote was removed in 2013 because it pissed everyone off including Maya Angelou. 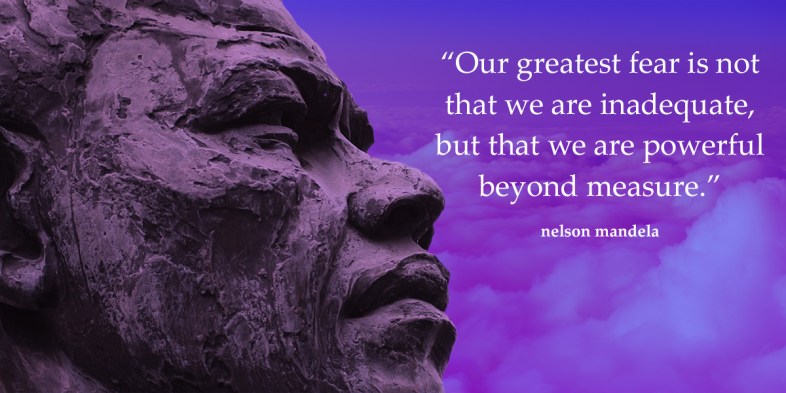 Commonly cited as part of a speech by Nelson Mandella but actually not ever said by him at all. This one was actually written by New Age activist Marianne Williamson in a book published in 1992. 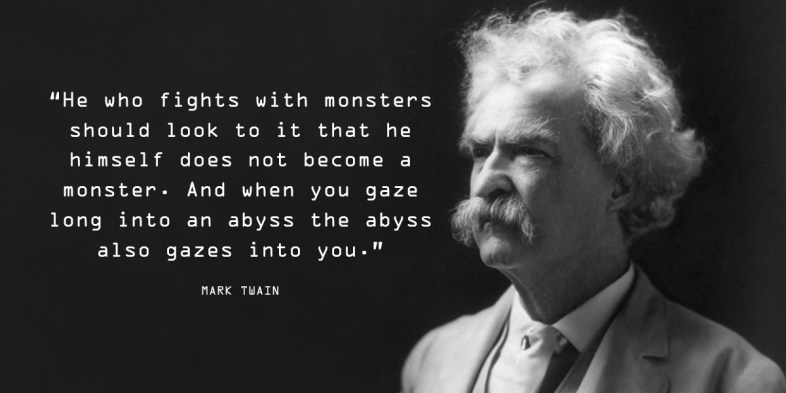 “He who fights with monsters should look to it that he himself does not become a monster. And when you gaze long into an abyss the abyss also gazes into you.” 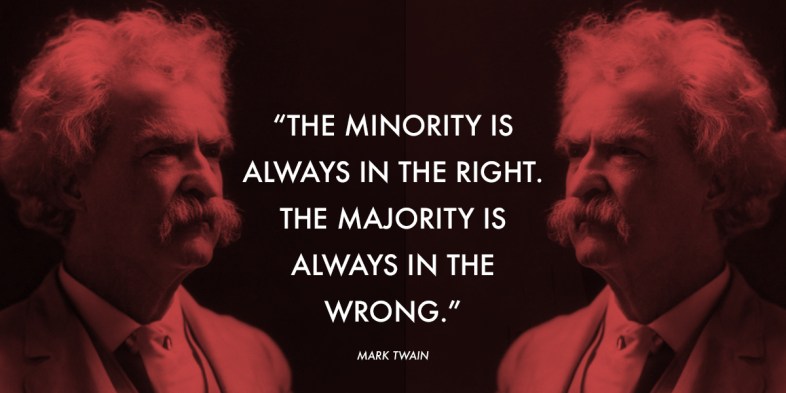 Also attributed to Twain but probably originally written by Swedish Christian Existentialism, Soren Kierkegaard. Again, have all but a handful of Americans heard of dear ol Soren? Grandma’s never going to share this without Mark Twain’s name attached to it! 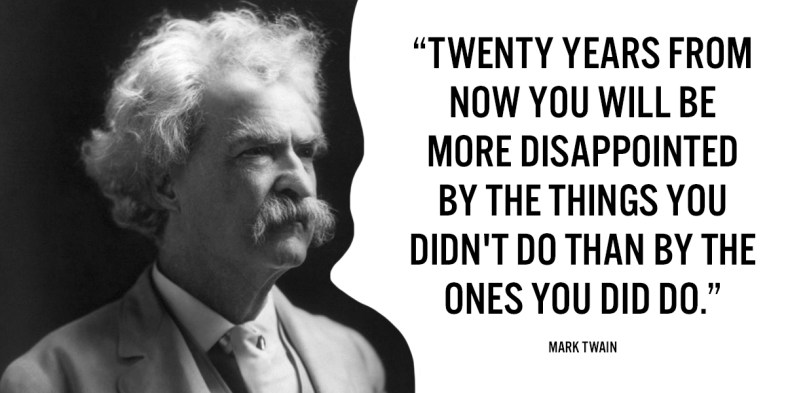 “Twenty years from now you will be more disappointed by the things you didn’t do than by the ones you did do.”

Very possibly written in the last twenty years, there’s no record Twain ever said any such thing to anyone at any time. 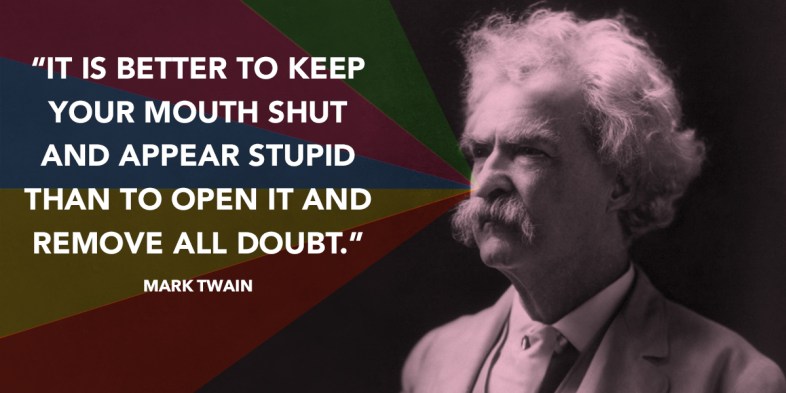 “It is better to keep your mouth shut and appear stupid than to open it and remove all doubt.”

This one is literally included in a book entitled “What Mark Twain Didn’t Say”.