1. “She’s completely selfless when it comes to her daughters and grandchildren. She would put us before herself any day and she’s a total lioness.”

2. “Grandma, or ‘Nana’ as I called her raised five children basically on her own. Now that I have my own daughter I absolutely do not know how she did it without losing her mind and fleeing the house. I can only hope that I have that much patience someday.”

3. “I admire that my Grandmother stayed playful and fun all through her life. She lived through some difficult times and had multiple health problems by the time she died at 72. Through all of it she remained funny and laughing. I feel like I’m flustered by even the smallest setback sometimes. Every time I feel that way I think of her smiling in her hospital bed and giving my Grandfather a hard time and both of them laughing about it.”

4. “She was graceful and had this beautiful Virginia accent even decades after she and my Grandpa moved to Chicago. She dressed in styles that were both new and timeless. She just glowed with confidence and made everyone around her feel it.”

5. “It sounds cliche to say out loud but my Grandmother can cook. She’s from that generation of Italian Americans that were still super in touch with their roots and still had every traditional recipe memorized. She can whip up a masterpiece in minutes that would take me an hour and three cook books to duplicate and do so while carrying on a conversation and handling two crazy baby grandchildren. I wish I was as good at literally anything as she is at cooking.”

6. “The thing I admired most about my Grandmother was her willingness to leave my Grandfather for abusing her. She did so at a time when society absolutely wasn’t focused on these things, becoming a single mother at 32 and raising my Dad and my Uncle. I just think that must have taken incredible bravery at the time.”

7. “My Grandmother is a helper. Growing up, she was always involved in helping neighbors, other family members, and even me. Without her help I probably wouldn’t have been able to go to college. She always seems to be trying to get involved in making people’s lives better and even now at 70 she volunteers at a women’s shelter and at the Humane Society. I’ve always wanted to be that kind of person and I think it might just be the most important way to be that there is.”

8. “She was the first woman in my family to ever graduate college. She did so while married to my Grandpa and raising my mother. I admire most that she went to school to learn even though it wasn’t necessary money wise since my Grandpa had a good job. She raised my Mom the same way and when I think about it it makes me realize what an incredible Matriarch she’s been for my aunts and uncles, brothers and sisters and cousins. Learning just to learn is a huge deal in my family.”

9. “How she tries to understand Skype and Facetime just so she can see me when she calls, even though she has no idea what she’s doing, and will try her hardest to make it happen.”

10. “My grandmother got pregnant accidentally after my mom and her two sisters were born. Back then, abortions weren’t exactly easy to get. So she drank bleach and jumped off the kitchen counter to induce a miscarriage. I think that took some serious guts. She also got divorced in an era when divorce was really frowned upon, which also took guts. I think she was one really brave, independent, forward thinking lady and I admire her for that. I wish I’d known her better while she was alive.”

11. “My maternal grandmother raised me during the day while my mother worked. She was extremely attentive and did anything I asked, including telling me stories, teaching me about makeup, and making me cheese sandwiches. Also, she thought it was hilarious when she wiped my nose on her lace curtains. She was fun and supportive and a great friend.”

12. “My great grandma was the queen of her town when she was 102. She was such a boss, she was never weak or shy because she was worried people wouldn’t like her. She was so confident and strong, I think she taught me the kind of woman I want to be.” 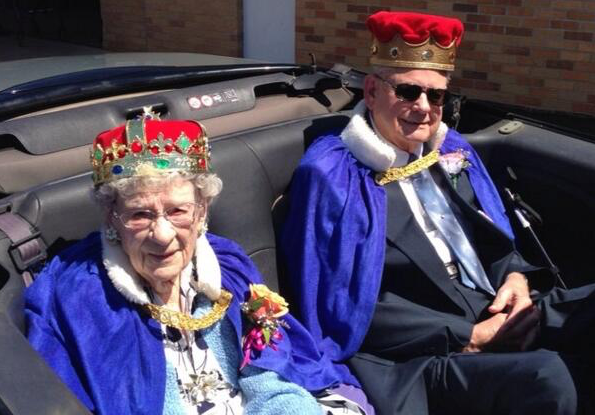 13. “My parents split when I was five and my mother had to work multiple jobs just to keep up with rent and food. She definitely couldn’t afford day care but every day for six years my grandmother would pick me up from school, bring me home, and make dinner for me. Until I became a teenager she was more like a mom to me than my actual mom. She very easily could have let her worry about my mom and let all that infect my life but she created this beautiful and happy home for me every day. Later on I realized most of my friends hadn’t grown up this way and I have her to thank for keeping my mom sane and making my childhood wonderful. She taught me to keep the faith and it’s something I’ll never forget.”

14. “My Grandmother is literally the only person alive that my mother is afraid of. Still, to this day, if she says my Mom’s name with a certain tone then my Mom gets this ‘oh crap’ look on her face. Given how awesome my Mom is, it says tons about how much of a boss my Grandmother is.”

15. “She has no filter, none. You always know where you stand with her. Also, she always tells me I’m pretty and that’s always good to hear.”

An Open Letter To Young Mothers