Joshua Goldberg is a twenty-year-old kid from Florida. He was arrested for providing bomb schematics to an FBI informant who was pretending to be a jihadist.

Before this, he was prolific on social media and various new media publications—including Thought Catalog, where I was his Producer.

In August of 2014, Joshua Goldberg contributed his first Thought Catalog piece to me by email. It was entitled “Why Hate Speech Laws Have More In Common With Fascism Than Democracy,” and it did something unique. It approached culture and political writing from a deep-web social-media angle.

Subsequent articles all had the same theme: Goldberg attacked censorship and advocated for a radical notion of free speech while focusing on the tension created between hate-speech legislation in some European countries and the Western notion of a free society. It was interesting stuff at the time, forceful but never abusive. People liked it, and it sparked a lot of discussion on the site.

Goldberg wrote tomes. A few pieces clocked in at 11,000 words and he repeated himself often. He cited ultra-left-wing extremists from Reddit, 4chan, Twitter, and other sites. I found this interesting because while I’d seen a lot of fringe stuff from right-wing people I hadn’t seen that much from left-wing ideologues. It was compelling and reflected the culture of the online incubators where these ideas are openly and freely discussed away from a broader audience.

After several months, I received an email from someone calling themselves Tanya Cohen who was contributing an article called “Here Is Why It’s Time To Get Tough On Hate Speech In America.” Tanya seemed like a character straight out of the Internet’s farthest left corners, and the writing style was very much like Goldberg’s—verbose to the point of redundancy. It also had most of the same grammatical errors Goldberg always made. Not long after, I confronted Joshua about it in an email. 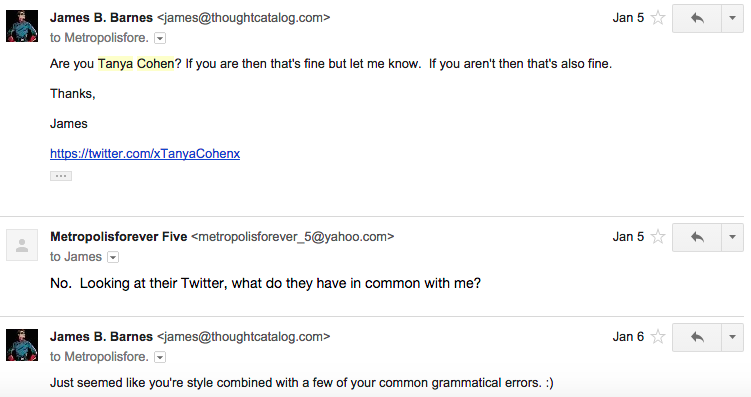 He never admitted to it, but I knew and he knew I knew. His writing style and submission’s timing were the only things that gave it away. I published his work under both names which he submitted via the above email account. The Cohen persona was purposefully extreme and clearly a caricature—or so I thought.

Whether it’s because parody on the Internet needs a neon sign labeling it as such or because people like to get mad at things they disagree with, people didn’t catch on to the ruse that was “Tanya Cohen.” With rare exception, people thought crazy Tanya Cohen who advocated against free speech and said that everyone against hate speech legislation should be sent to reeducation camps was a real person. They took it at face value. All told, Joshua wrote eight articles under the name Tanya Cohen for Thought Catalog.

Little did I know that he wasn’t just writing these pieces, he was also sharing them on Stormfront under a different pseudonym (Michael Slay), where he pretended to be a white supremacist complaining about Tanya Cohen. As a result, Thought Catalog’s comments section on these Cohen articles started to draw more and more white-supremacist commenters. I didn’t find out about “Michael Slay” until Goldberg was arrested and the media revealed it.

By this Spring, Goldberg’s articles under his real name had become repetitive and increasingly hostile. I asked him when he was going to reveal that he was not only Joshua Goldberg (the extreme free-speech advocate) but that he was also Tanya Cohen (the crazy human-rights advocate). I had been under the impression that this was the entire point, that Goldberg was setting up two opposing ideals to show how both were too extreme. Why do it otherwise?

He informed me that he had zero plans to ever reveal the persona, and I became less and less interested in publishing him. After January, articles he wrote under his own name became less frequent. After March of this year, so did his Tanya Cohen articles.

In mid-June he asked me if I knew of anyone at Huffington Post to whom he could submit his Tanya Cohen articles. It was clear that he wasn’t going to tell them that Tanya was a pseudonym.

After his last article was published in June, I assumed he was done trying to publish with Thought Catalog and believed that was likely the last I’d hear from him. But, when his name popped up on Prime Time news I started going over our past emails and Twitter DMs. I found one piece of correspondence from him that in retrospect is chilling. 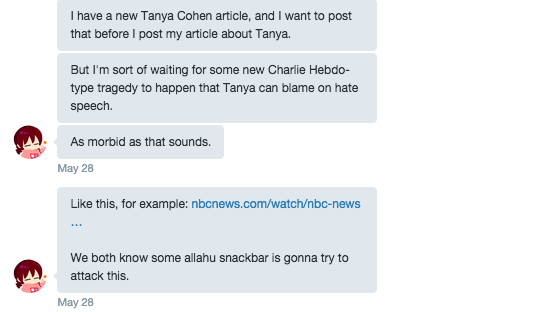 At the time, I thought he was merely mentioning something from the news. I didn’t know he’d been pretending to be a jihadist online. But now, given his arrest, that DM looks different to me. What I thought was a morbid offhand comment about writing a hypothetical article after a hypothetical attack takes on a new and horrifying meaning once you realize he was posing as a jihadist online and sent bomb plans to someone he thought planned to kill people. Was he hoping to create an event that he could then write about using his Tanya Cohen persona? Was this just more fodder to feed his online activity? I truly hope it wasn’t. I can’t think of many things more horrible than that, and I have a vivid imagination.

People are still trying to make sense of Goldberg’s trolling as if there’s some confusion about it. For those of us that work on the Internet for a living, it’s easy to see how this could happen, though no less frustrating. Our online discourse is largely binary—black and white, left and right. It’s simple and basic because that sells easily, and so most of our culture websites such as Feministing and Breitbart—both of which were fooled by Goldberg—are ideological, meaning they insist there’s only one valid angle from which to view the world.

These sites identify their audience, play to them, amp them up, and promise truths that “others” don’t know, truths to which only they and their group are privy. They twist truths or tell lies the audience wants to hear and, as with any performance, over time the message has to become more and more extreme lest the audience get bored. As an ideological site, you identify opinions outside the circle as monstrous and, yes, sinful. You identify heresies and codify theology. You create religion. All this happens for money. Goldberg, despite his trolling and pending day in court clearly understood all of this well.

Our ideologically driven online media doesn’t merely serve certain audiences, it creates vast populations of comment trolls as zealots for the cause and sends them out into the web armed with a godlike certainty. Our media depends on them to drive one-sided and demonizing debates. One glance around the web reveals Goldberg isn’t an exception in terms of online behavior, he was just a highly advanced version of the norm. Vitriol is what we’ve settled for in our insecurity and it’s what we’ve received. There will be more just like him in the future and, just like this month, the ideological audience will ask “how could this happen and why” while washing their hands in the same pool of money. Why, indeed.

Before his arrest, Goldberg reportedly stayed online all the time chattering away with one ideological sect or another, aligning with some and fighting with others, never leaving the house. Now he’s facing 20 years—his exact age—on terrorism charges. Whether a troll or a terrorist, neither indicates a life well spent.

If You Aren’t Doing These 17 Things, You Don’t Understand Social Media

Social Media Can Ruin Your Relationship (And Your Life)

How To Talk To Republicans About Trump (Without Losing Your Mind)