Did you watch the VMAs last night? Yeah, me neither. I was six episodes into catching up on season 1 of Rick and Morty instead, possibly the best show on television or at least top five. However, I did catch up on my tweets last night as well and got to see Nicki Minaj put Miley Cyrus in her place once and for all on behalf of all Black people everywhere or some White people somewhere or some Black people at some point or all White people in the future….or something. Here’s the video if you haven’t seen it.

Uh oh, interracial cat fight, call TMZ because Americans love this kind of thing. Every member of the media into the pool! Salon got their racism confused with their progressivism, a common media mistake, honestly.

This is not an apology, @Salon. pic.twitter.com/cKS3Q7MKTf

Here’s a Google screenshot. This thing is everywhere. 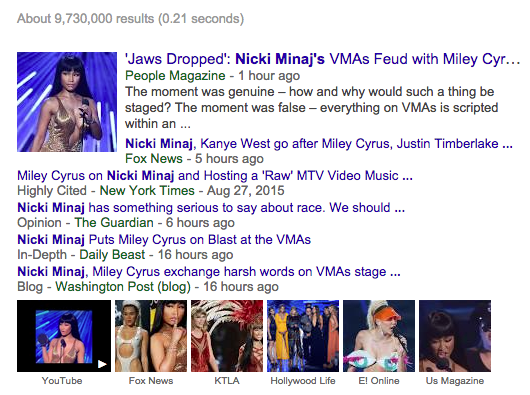 Before we start let me make one thing clear. The entire “event” was theater and it was racist theater at that. I hated it and I think you should also hate it. Here’s why…

So the story here is about how the VMAs are racist or something because Nicki Minaj’s soft porn ‘Anaconda’ video (which I’ve seen at least 25 times sober and 5 billion times drunk and lonely) was “snubbed” and now her, Taylor Swift, and Miley Cyrus have been Twitter/interview fighting, y’know, like the teenage Twitter users that follow them (and the source of Twitter fight monetization). I hope you already think this is boring because it is but at the same time it’s also a masterful bit of theatricality and advertising on the part of these three millionaire businesswomen. It also proves that women enjoy watching other women fight and that enjoying stereotypes is still an America past time for most everyone. This “event” endorses both those activities fully and completely.

First off, this is fake. It’s as fake as professional wrestling and just like in professional wrestling it plays with archetypes or “stereotypes” if you will. Nicki is the wronged woman of color whose crowning achievement was denied her when ‘Anaconda’ didn’t win best video of the year. My God, the tragedy, the relatability! Miley and Taylor are the privileged White girls standing in her way, the power structure keeping her from becoming all she can be in a trope of oppression that makes a mockery of actual oppression. This is oppression as performance. Place your bets.

In “the event,” Nicki goes from valley girl to savage (and yes, Salon meant ghetto) girl in a millionth of a second. We’re to take this as sincere and we’re to ignore her friendly, laughing smile at the end just as the camera cuts away (just a nanosecond too late, I might add, and how did they know to cut away then). We’re to believe that inside every Black women there’s a raging savage just ready to jump out on White people and put them in their place. See the above mistweet by Salon, this is all according to a theme and a plan. Nicki “flips out” and changes her voice completely just to chastise Miley and the media is then supposed to hand wring about whether it’s racist to notice that even as the entire thing was contrived to show young Black consumers that Nicki is “real” meaning she yells at people on national television.  That’s the most racist set up I’ve ever heard of and I’m not making it up. That’s literally what happened last night with zero embellishment.

Miley, in turn, handles all this easily with no stuttering and moves the entire show along just as a host should, just as they’ve rehearsed. The savage reaction of Nicki is turned away by the easy hand of a White woman literally on a pedestal in the middle of the room commanding power over the entire event. How much more can they spell this shit out for you?

And what is the crowd’s reaction? As in the coliseums of old there’s a collective “oooooooh” as if something of import has occurred here, as if something real and meaningful has taken place and this “event” becomes a catharsis wrapped in a racist package. Black people watching think “yeah, score one for #teamBlack” while White people watching think “Nicki’s being unreasonable” or, if you work for Jezebel or Salon or other makers of liberal White culture you fall back on your politics and think “Nicki is fighting against oppression.” And lo, the people are entertained and forget for a moment their extreme weariness.

That’s cute. It’s cute that people believe these celebrity driven things, that they think they’re real, that they think they are represented by these people somehow, that they think three of the smartest women in the music business just fell into a public argument over Twitter that spilled into an interview and resulted in a Black woman yelling at a White woman on national television, that the timing of all this leading to an awards ceremony (which is a giant commercial) is just happenstance without forethought or planning, that no one notices Miley and Taylor are continually the “reasonable” ones or “the White woman who learns” in this exchange. Yes, it’s cute that people think there are sides here, that “an event” occurred, that the racial and personal animus is real.

Yes, racism was in full effect last night but it wasn’t the kind others are saying it was. It wasn’t the kind where Nicki Minaj is a victim in a racist system. No, this is a theater of racism where Nicki Minaj can coerce Black people into cheering her on for breaking into a tough talking stereotype because that somehow equates to “real” and where Miley plays the “reasonable” star in foil to that stereotype while allowing just enough of a window in her performance for a discussion of privilege just as Taylor Swift did just a couple weeks previous. Amazing isn’t it that three female millionaires are leading the pop discussion about race and privilege? Where are they leading exactly? Oh, right, back to themselves and their brands. It’s a commercial, remember?

And the viewers and the media ate it up, eager to pick sides and “really talk” about race and privilege and white feminism. As if the celebrity industry would ever want to start a discussion on that that would ever end. As if they’d ever want anything but the ability to repackage it at will under the circumstances of their choosing to increase ratings, marketshare, visibility, to boost sales. As if a fake fight on a nationally televised commercial could ever address these things. It’s a ceremony, an act of cultural worship. It’s a symbol, a kind of hyperreality that people can learn from if they know it’s fake. But if they don’t (and most, it seems, don’t)…then, well, they become the very thing that they should be denouncing.

Millionaire businesswomen don’t fight on Twitter if there’s no profit involved for them. They don’t make scenes where the stakes are exactly zero unless there’s cash involved. There is nothing to be learned here except that Americans love racial dramas and the entertainment industry knows that. Nothing actually happened. Look away.

I Am A Kanye West Fan, But His Recent Work Has Really Let Me Down

Here Are The 13 Absolute Best Celebrity Selfies Of 2015