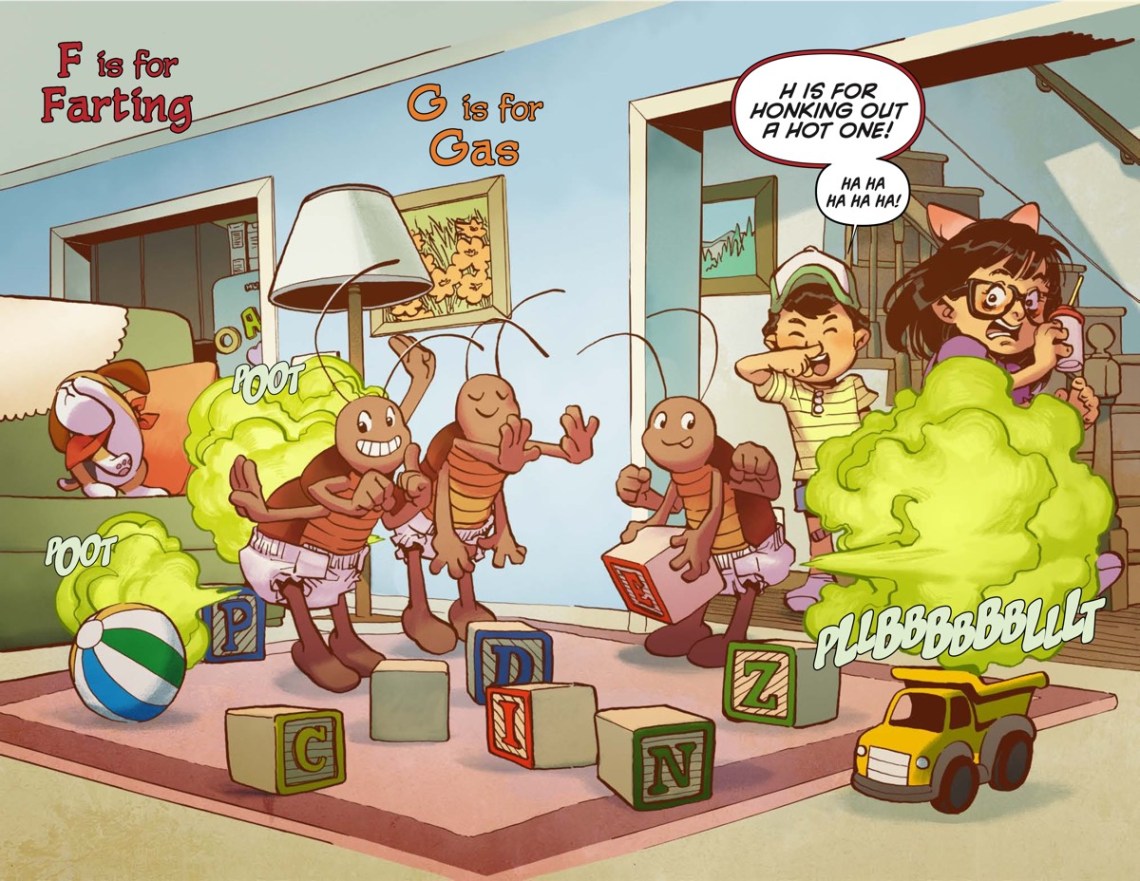 Greg Pak is an award-winning Korean-American comic book writer and filmmaker currently writing “Batman/Superman” and “Action Comics” for DC Comics, “Turok” for Dynamite, and “Storm” for Marvel. His latest independent project is ABC Disgusting, an ABC book for children and adults alike. Thought Catalog caught up with him to talk about the book, available via Kickstarter, and pick his brain on the comics moments that have influenced him the most.

TC: How did you hit on doing an updated ABC book instead of literally anything else you might have done?

Greg Pak: I had a tremendous time last year writing “The Princess Who Saved Herself” children’s book, based on the beloved Jonathan Coulton song. I spend most of my time writing comic books, which I love dearly. But writing a kids’ book stretches different muscles in a great way — a bit like writing a poem after spending months writing a big novel. So, I was hungry to jump right back in with another kids’ book, and I found myself thinking about the things that made me laugh the most when I was little. I remembered coming up with the idea of a mayonnaise milkshake and grossing out all my friends just by talking about it. And that made me think of other gross stuff, and I started making a list, and realized this could be a pretty fun alphabet book.

And then I pitched it to the great “Princess Who Saved Herself” artist Takeshi Miyazawa, who immediately got it and loved it. And nothing helps make a project become real like getting a great artist as an enthusiastic parter in crime. So here we are! 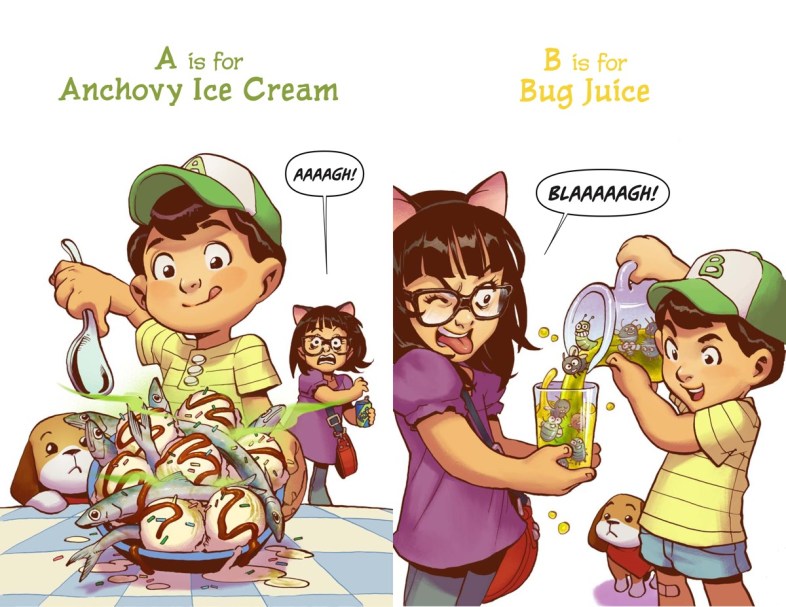 TC: The preview shots that I and everyone else have seen are a lot of fun and I can see liking them when I was a lot younger too. Who did you write this for? Kids, or just the cool parents?

GP: Oh, it’s absolutely for kids. I know there’s a bit of a trend of funny, jaded kid’s books aimed at adults (“Go the F— to Sleep”) is probably the best known). And yes, adults should get a big kick out of this book, too. But it’s definitely a book for awesome kids who think gross stuff is hilarious.

I’m also hoping it’ll be useful to folks who are trying to reach reluctant readers. Some kids might need the promise of something a little naughty to get them to pick up a book. If this can help open a door to reading to kids like that, I’ll be thrilled. 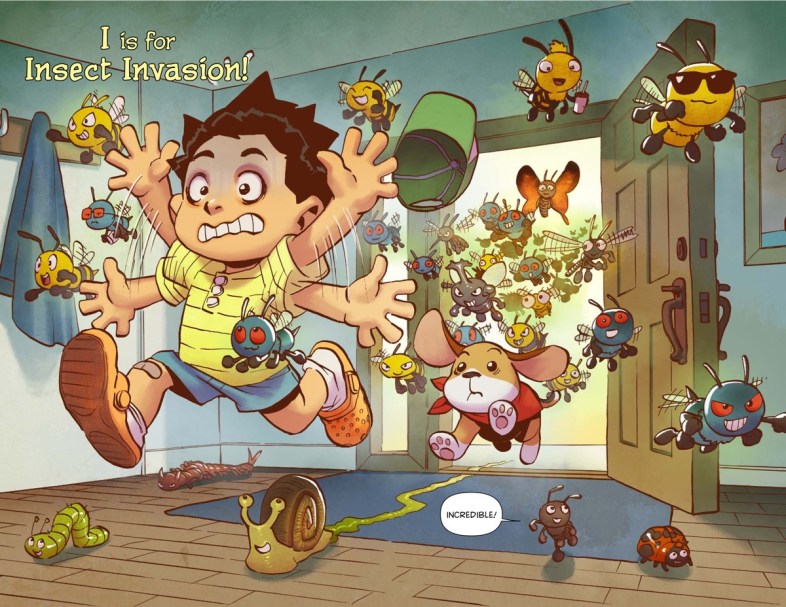 TC: Which letter is your favorite? Do you have any that you really dislike, consonants for example, or simply the ugly sounding letter ‘Q’?

GP: “M is for mayonnaise milkshake” is probably my sentimental favorite because it’s one of my earliest jokes and it’s finally going to end up in print.

I’m a big fan of “Q,” actually, probably because I get excited when I pick it in Scrabble. “Q” in the book is for “Quokka,” which seems a little strange, because quokkas are absolutely adorable. But we found a way to make it gross.

“Z” is always tricky when you’re doing an alphabet book. But I started looking at lists of animals and discovered the zorilla, which looks and smells like a skunk, so that was pretty perfect. 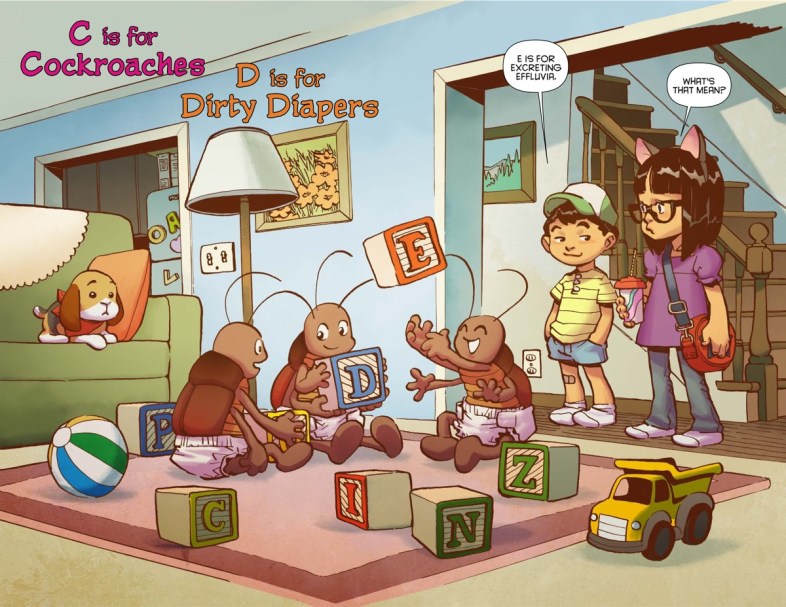 TC: What have the reactions been to ABC Disgusting among your comic-writing peers?

GP: I’ve been thrilled to see a bunch of them plug the book on Twitter and back it themselves! Comics people are the best.

TC: I think some readers tend to see comics as “comics” rather than illustrations of a certain type. After completing ABC Disgusting, do you have a desire to get into further illustrated stories that are outside the comic book type?

GP: You bet! The next challenge I’ve got my eye on is illustrated chapter books, which use much more chunks of prose than I’ve done with “Princess Who Saved Herself” or “ABC Disgusting.” I’ve got one story in particular in mind that Tak will illustrate as our $40,000 stretch goal for the “ABC Disgusting” campaign, so maybe we’ll be tackling this sooner rather than later!

TC: Okay, where can people get their hands on a copy of this gem?

GP: Head right over to the Kickstarter page here! The campaign goes on until 11:59 am ET on Wednesday, July 29, so be quick!

If the campaign hits $30,000, all backers will get an awesome “ABC Disgusting” theme song written and performed by the great Jane Lui (who tells me she’s already researching fart sounds, so it’s gonna be good).

And if we hit $40,000, artist Takeshi Miyazawa and I will make a whole ‘nother book! It’ll be a chapter book with black and white illustrations called KAIJU CLUBHOUSE that features the kids from ABC Disgusting as they go monster hunting. Every backer will get it in digital form if we hit that $40,000 level, so please do feel free to help put us over the top!

TC: You’ve done a ton of work on a lot of different titles, what are the top comics moments that have influenced you personally?

1. Charlie Brown’s “How did the other team feel?” moment – Charles Schulz’s “Peanuts” was my first comics love. I read and reread the Fawcett paperback collections of the 1950s and 1960s strips a million times as a kid. But the one strip I probably think about the most is the famous “How did the other team feel?” Sunday comic. Schulz never, ever forgot the underdog. That’s something that’s always stuck with me.

2. The Death of Captain Stacy – I read this story at a very young age in a big “Marvel Treasury Edition” Spider-Man book. It was the first time I’d ever seen a “good guy” die in a comic book. It opened up my eyes to what kinds of things were possible in comics — and in fiction in general.

3. Robbie Robertson – The Daily Bugle’s managing editor Robbie Robertson was one of the very first non-stereotypical non-white characters I’d ever seen in any form of fiction. I was an Asian American kid and Robbie was an African American man, but I totally identified with him and loved seeing him in comics. His particular blend of careful confidence in making his way through the world felt very real to me.

4. The cover to “Micronauts” #9 – I loved the MIcronauts toys and was blown away by the epic sweep of Bill Mantlo’s and Michael Golden’s “Micronauts” series as a kid. One piece of art in particular that I think about all the time was Golden’s “Uh-oh!” cover for “Micronauts” #9, which epitomized the book’s adventure, suspense, wonder, and great good humor.

5. “Moon Knight” #26. Moench’s and Sienkiewicz’s “Hit It” story in “Moon Knight” #26 was a story about child abuse and the legacy of violence — and the story that made me think of comics as great literature. I haven’t read it in years… but now you’re making me want to dig it up again…

7. Usagi Yojimbo – I pored over Stan Sakai’s art when I was a teenager drawing cartoons. His clean, confident lines dazzled and inspired me. I still want to draw clouds like Stan.

8. Bruce Wayne in “Batman Year One” – Miller’s and Mazzucchelli’s “Batman Year One” was the first superhero story I ever read that made a huge effort to seem as real as possible. I’d never seen muted, deceptively simple, realistically proportioned art like Mazzucchelli’s in a superhero book before and Miller’s unabashed use of evocative voiceover hit me hard. That moment in “Batman” #405 when Batman’s desperately trying to keep one criminal from falling off a building while the criminal’s buddies hit him with a television set was huge for me — an eye-opening exploration of the idea that it’s just a guy in that suit — who just might be making a terrible, terrible mistake and absolutely could fail. Every bit of action in that book felt visceral, real, and spectacularly high-stakes on an entirely human level.

9. Psychic stand-off in “Domu” – Katsuhiro Otomo’s best known for “Akira,” which is absolutely spectacular. But the scenes of the little girl psychically battling the old man in the apartment building courtyard in “Domu” strike me as even more astounding — because they’re so calm while being completely terrifying. It’s basically just two people staring at each other. But the way it’s staged and drawn creates nearly unbearable tension. Such great comics.

10. Every Single Panel in “Nausicaa of the Valley of Wind” – the only downside to Hayao Miyazaki creating so many incredible animated movies is that he hasn’t spent more time making more comics. His “Nausicaa of the Valley of Wind” manga is one of my favorite comics of all time. Epic storytelling, incredible girl hero, mind-bending world-building, tremendous heart, and a broadness of spirit that delves into all sides of the monumental conflicts at the core of the story. And full of both huge, epic action and quiet, affecting character beats. All my favorite stuff.