Skip to content
Report This Article
What is the issue?
Cats are notorious liars (in? out? what do you want?) and it is for this reason that they’ve left you in the dark about so, so many things. Dead family members, skeletons in the closet, unnatural coitus, all these secrets about cats now stand revealed and you’ll never look at them the same way again. Let’s start with the basics.

3. The common household cat is a direct descendant of the African Wildcat which looks almost exactly like a household cat. As proof, they look like this:

4. The African Wildcat was first tamed in the Middle East about10,000 years ago. [Source]

5. Genetic testing has shown that modern house cats are descended from five African Wildcats who were domesticated and then transported from Africa to the Middle East, likely without the aid of Benadryl. Alternatively, they were transported and then domesticated. [Source]

6. The African Wildcat is ubiquitous in Africa. They are non-threatened. [Source]

7. They’re full capable of interbreeding with your non-spayed or neutered housecat.[Source]

8. Cats talk via vocalizations and movements just like me and you. You can talk with them, sort of.

9. Cats meow when they want something or as a greeting or because you didn’t clean their litter and they want it cleaned. [Source]

11. Cats chirp when they’re trying to get your attention or are excited like when they’re staring at a bird out your window. [Source]

13. Cats yowl when they’re trying to get laid mostly. It’s either “have sex with me” or “stay away from this place where I’m trying to have sex.” Alternatively, they’ll yowl when you move because they miss their old house and you moved without asking them first, probably. [Source]

15. Female cats scream when mating because the male cat has a barbed penis that hurts when it’s pulled out. She will then turn around and try to smack the crap out of him. [Source]

17. Cat sex is pretty brutal. The male will pin the female down and bite her by the scruff of the neck when possible because he knows that when he withdraws it will hurt her and she’ll try to turn around and smack the crap out of him. [Source]

18. But enough about cat sex. In addition to the African Wildcat there are also other wildcats out there similar in size. This includes possibly the cutest little kitty ever seen on the face of the Earth, the Sand Cat.

19. It’s unbelievably cute and looks like this. These are not kittens.

20. My God, that cat is cute. Look at those little stripes along it’s legs, perfectly symmetrical. They live in the desert and thus have a lot of fur on their feet which protects them from getting burned when it’s hot and insulates them at night when it’s cold. [Source]

21. Sand cats are very small and weigh, at most, seven pounds. It’s also not unusual to find one as small as three pounds. [Source]

22. Even though they’re tiny, they have the strongest bite of any cat in the world in proportion to their size. [Source]

23. Cats have four regions in their brains associated with different emotions. So do humans. Dogs do not. [Source]

27. However, there are 60 million feral cats in United States as well. [Source]

The American Lion was larger than the African Lion and most closely related to the Eurasian Cave Lion. It was the largest sub-species of lion to ever exist. The largest remains ever found are believed to have belonged to a 774 pound lion. These guys died out about 11,000 years ago. [Source]

32. The closest thing to these massive killers you might be able to own is a Savannah Cat which is a mix of an African Serval Cat and a housecat which sounds like it should have been a terrible idea since the Serval Cat weighs up to 40 pounds. The product of this union, the Savannah Cat has been compared to a dog in temperament and can cost as much as $14,000. [Source]

They also fetch which is kind of amazing.

33. Ever wonder what a group of cats is called? The answer is a “clowder” or a “glaring.” [Source]

34. Everyone is familiar with how much the Egyptians revered cats and would be buried with them, etc, but most people don’t know that this wasn’t a new practice. A Neolithic cave found on the island of Cyprus in Italy was found to contain a grave of both a human and a cat buried together. The grave is believed to be 9,500 years old. This is the earliest known instance of cats being buried with their owners in any culture and the cat was believed to have been a domesticated wildcat kitten of eight months.

This was probably an African Wildcat as mentioned above. [Source]

35. The goddess of love, beauty, and fertility in Norse mythology, Freyja was the first cat lady. She is depicted in stories as riding a chariot that was drawn by cats. 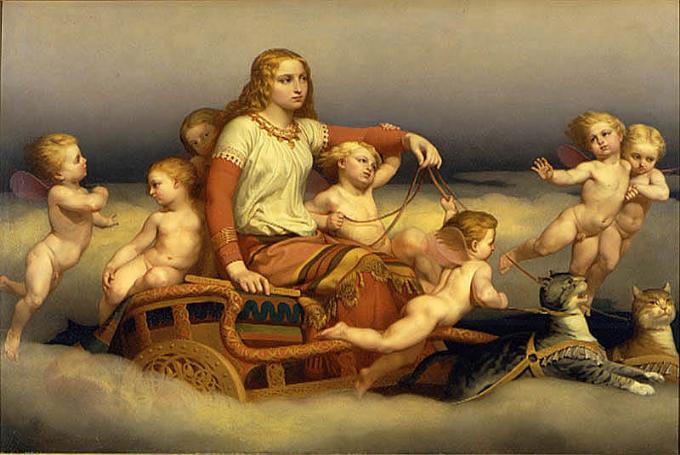 36. I’m of the opinion that having to hear more about how much the Egyptians “loved cats” one more time is the only thing that’s capable of making cats boring.

37. Isaac Newton invented the cat door, probably because he was tired of having to get up over and over to let the cat in and out. [Source]

38. The internet claims repeatedly that Hitler hated cats but provides no source for this claim at all. It also claims that both Abraham Lincoln and Robert E. Lee loved them. This latter bit is true but I think the former is just another way to say how bad Adolf was…which is true, he was. [Source]

39. Some claim Medieval Europe’s Black Death was exacerbated by Pope Gregory IX’s insistence on killing cats because they wouldn’t obey people which he saw as unbiblical. Genesis says man should be able to dominate animals. He also saw them as evil, largely because those persons accused of witchcraft were old women who lived alone with, you guessed it, cats.

While this makes literally no sense at all given the millions of wild animals that also wouldn’t obey humans but still weren’t seen as evil, Gregory made everyone kill cats anyway. As a result, rodents became more plentiful and they also carried fleas which, in turn, carried the Bubonic Plague.

However, while this claim is interesting, it’s not borne out by the evidence. The Black Death also killed millions in the Middle East, China, and elsewhere in roughly the same proportions as Europe and those places had no cat genocide policies at all. [Source 1, 2, 3]

40. This is what cats would look like in space.

41. This is what they actually look like in space though.

42. You’ve read this much so let’s discuss what we’ve all been waiting for here…Ligers.

43. Ligers, a mix between a lion and a tiger, are massive. They’re also sterile like mules which are a cross between a horse and a donkey. Like the mule, the Liger exhibits what is known as “hybrid vigor” where the offspring of a hybrid union is better than both of the parents. [Source]

44. The largest Liger ever to exist was Hercules. He weighed 992lbs. He was also the largest cat to ever exist. [Source]

45. While Ligers do traditionally have genetic problems, they don’t grow forever as some people claim. However, they do appear to grow for a longer period of time than either tigers or lions. They’re also vulnerable to diseases that lions and tigers alone are not. [Source]

46. On the opposite end of the spectrum, the offspring of leopard and puma love tend towards dwarfism and exhibit none of the hybrid vigor which Ligers do. [Source]

47. Seriously though, your cat probably loves you, probably. I mean, mine does, I think.

50 Fun Facts To Distract You From Our World Falling Apart