For 20 years, filmmaker Sooyong Park has devoted his life to the study, recording and preservation of the wild Siberian tiger. 2-3 times a year, he leaves his family for months at a time to stay in the frozen forests of Eastern Russia, Manchuria and the Korean Peninsula in hopes of catching a glimpse of the great cats.

To withstand temperatures of -30*C, he builds himself an underground igloo, reinforced with sticks. To sustain himself, he packs hundreds of tiny rations of nuts and seeds in plastic wrap. When he’s thirsty, he drinks the snow.

Then, he takes out his camera and waits.

Sometimes days. Sometimes weeks. Sometimes months — waiting for the tigers to show up. And even when they do show up, he’s not allowed to show his excitement. He has to be absolutely focused in hopes of getting one, fleeting picture without scaring them away (or getting himself killed).

And because of Sooyong’s unconventional ability to focus on his work with tigers, the world has gotten some of the rarest footage ever captured of tiger behavior in the wild. Among his best finds, Park has captured some of the only footage of tigers giving birth in the wild, playing with each other at various ages, and doing other incredible things that nobody in the world has been able to record.

After watching a documentary about him, I immediately started thinking about what it must be like to focus on one thing so intensely for such a long period of time. It blew my mind.

Imagine being alone in that igloo, 24 hours a day, 7 days a week. No updates on social, no contact, no toilet.

The funny thing is, it’s a GOOD thing he was so isolated out there.

Having contact with the outside world and constantly being wrapped up in the flow of daily gossip soundbites would have robbed him of the chance to actually focus on what he came there to see. And the same thing is happening to you and I every single day.

Focusing in today’s world is harder than ever.

Unlike Sooyong Park, most of our jobs don’t require us to be out in nature for extended periods of time — so it’s much harder to escape the social media tractor beam. Most people can’t even complete a single task from beginning to end. It’s no surprise, really. Just take a look at your environment. The way that our culture and society is set up is not conducive itself to maintaining discipline or focus — partly because we’ve made ourselves increasingly available to outside intrusion

A few decades ago, there were just a handful of ways to contact each other: snail mail, home telephone or in person. That was it. Fast forward to today, and there is an almost infinite amount of ways to “check in” on somebody that you want to talk to.

On my phone alone I have:

That’s 12 different ways to get in touch with me at any given moment!

Not including making an actual phone call! That, my friends, is DESIGNED distraction.

Everything in our lives is brilliantly designed to make us keep coming back for more…while getting less and less done. It’s almost impossible to avoid. This isn’t an excuse to fall into the Candy Crush oblivion and never return…but it’s just a fact. The technology you use every single day is designed to drain your focus and decrease your attention span.

I’ve said it before, but with so much distraction, uninterrupted focus is a rare superpower these days. One of my friends, also named Daniel, says it this way: “Give the greatest philosophers of ancient history Facebook and I’ll show you all the books they didn’t write.”

Focus is a learned skill, and attention can be developed like a muscle. The more you focus on training this skill, the easier it becomes to “switch on.”

The most common response to lack of focus is attempting to use your will to overpower the distraction. Maybe you even delete annoying apps and pledge to only check your messages every fortnight. These ideas sound good…but we know they never end up working long term.

Eventually, you’ll have to use your apps. And you’re going to want to check your email. Being focused isn’t about cultivating greater willpower or hoping that the world goes back to a “simpler” time.

You’re most likely going to be on social media. This is just part of our new social ecosystem. Get over it. Most of us want to use these tools — so it’s not about eliminating them, it’s about learning how to adapt your lives to them. What you spend your time on is a result of what you do habitually. If you can change your habits, you can increase your ability to focus and change your entire life.
Learn to ride the “Motivation Wave” for as long as possible

Stanford professor B.J. Fogg really digs into the heart of our discussion today and delivers a framework to be productive according to the time of day.

He looks at motivation a bit differently than most. According to Fogg, motivation is a wave with peaks and valleys — and the goal isn’t to stay at a constant peak — but rather, to recognize the valleys and adjust your effort accordingly. 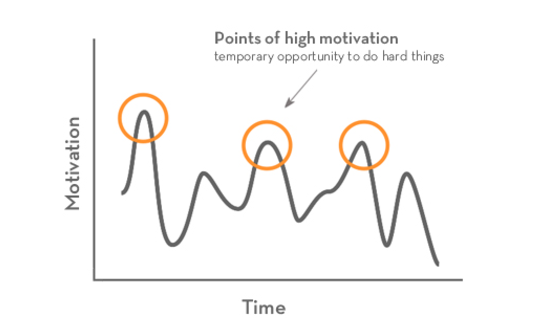 According to Fogg, it’s not realistic to expect focused attention from yourself at all times. Instead, the key is to become more aware of your daily (or even hourly) fluctuations in motivation — and do the hardest things in your day when you’re feeling the best.

For example, you might use this approach to “trick” yourself into working out every morning.

You know that when you get up in the morning and you’ve just had your first meal, your willpower is at the highest point it will be all day. You haven’t checked your email yet or jumped into the maelstrom that is social media.

If you hurry up and get to the gym, you can take full advantage of the natural motivation wave that hits you first thing in the morning — and if you ride it carefully, you can surf those feelings of optimism into the early afternoon by maintaining your energy until 12 or 1pm.

In anticipation of this wave, you’ll stack all your hardest work between 10am and 1pm. All the calls you don’t want to make. All the tedious emails you don’t want to answer and all the boring work you have to plow through. You need to do them when you’re at your peak state.

You already know that if you wait until you’re already feeling the afternoon dip to start force feeding yourself the most dreaded tasks, you’ll never get them done.

Do what you can when you’re feeling good, then purposely find easier things to do when your wave is dying down.

I’ve organized my day this way, which is why I wake up at 4:45am and give myself hours of undistracted time to get my hardest projects done before the rest of the world even wakes up!

I can easily say I’ve 10xed my productivity in the past 6 months alone since adopting this new routine.

Read This If You Are Searching For Motivation