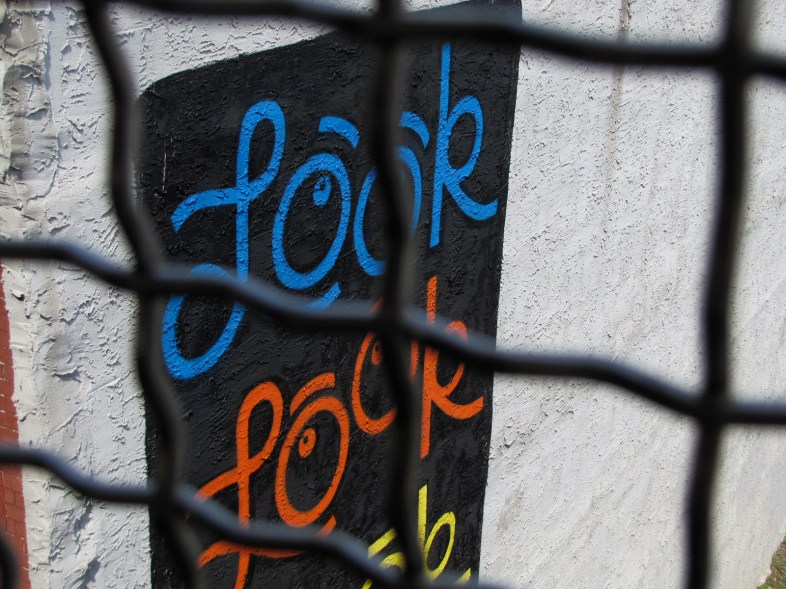 I felt ridiculous. I thought about taking off all of my clothes and getting in the shower and dragging my nails over my stomach, an old habit; the shower was already running, after all, and I live in Los Angeles and we have droughts and I don’t contribute enough to society to compensate for that water deficit.

The dress stayed on and I knelt in the only square of space available on my bathroom floor and sobbed through more pleas to my toilet, as it would have appeared: “please, please, please.”

I felt bad for it because I felt like I’d hit a real stride and felt like I shouldn’t have anything to feel bad about. I’d gotten a job with a salary, I wasn’t in a relationship that I hated, and I was having fun in a new city. I was going out a lot, things were coming together a little bit. I felt strong and independent.

At the peak of that fresh independence, a friend of mine — an ex boyfriend, a high school/college sweetheart, a person with whom I share a group of high school friends who still talk, as it was — had fallen a couple stories from a fire escape and broken a lot of bones, damaged his lungs so that they could not function on their own, and landed in a medically-induced coma. He’d been pronounced dead on impact, so I’d heard, and then resuscitated and then comatose and then—

(He’s healthy now, like all the way healed, like walking, like talking and writing. His case is the kind of medical ‘miracle’ that medical students love.)

The limbo of not knowing if he would live through it was a weird time, from fall to the weeks-long coma to the surgeries. It had me spinning. I started writing a lot of things during that time and I kept them private. Here is some:

I haven’t heard from anyone today, re: your status. That’s the first time in a while. When did you fall? Was it September? It feels like it’s been weeks, I think it’s only been two and some days. It scares me to go five minutes without thinking of you, and I go twenty to thirty sometimes, sometimes an hour, sometimes maybe more but I try not to count. I used to go to bed and wish I wouldn’t think about it, the way you might feel or not be able to feel, but now I feel like if I forget to think about it, I’ll miss something.

And really I’m missing everything.

I don’t know if you’ll see this, I’m not sure if it will be a good distraction or just something upsetting. I’ve seen so many things I want to tell you about. I feel so scatterbrained and spread.

Every day waking up feels a little like when you walk into a room and forget why you went there in the first place. I’m halfway here.

I envy everyone who gets to see you right now, but my wrists hurt when I think about how it must feel to watch you and wait for you to wake up and be okay. I cross my fingers and kneel at the foot of my bed, I pray even though I don’t know how. I try to think of funny things to write for you and the right things to say or not say or do or not do for everyone else, and I don’t think anything feels right.

Wake up, please wake up. Or rest and get better to wake up another day, but keep going. Everyone misses you. I miss you.

I needed people, I was surprised at how much the whole thing threw me. Moreover, I was embarrassed: I’m constantly criticizing myself for being too navel-gazey, too self-absorbed (Thought Catalog writer, 20-something idiot cliché, of course) and I didn’t want to make it about me. And I didn’t want to go full martyr about how I didn’t want to make it about me. It felt gross. I did things to care for other people, I did things to take care of myself, but I still couldn’t stop calling myself awful in my own head, purely for worrying about being awful. It felt dizzying, it felt like a small space I was bringing my chest to my legs to be in, it felt lonely, it felt wrong and stupid. It felt like a lot of things at once.

I’d dealt with death before, but not the possibility of death — wondering if and when I would have to say goodbye and hating my brain for even bringing it up.

“Why am I so negative and obsessed with death and why do I think I am special for thinking that way? Why am I so selfish? Why am I still asking “I” questions?”

Writing about it now feels vain and strange, because to a degree, I feel like I could go back now and tell myself that I was being stupid, that those things were normal: my impulse to focus on myself was a distraction from the real scary thing, the possibility of loss and the unknown, and my impulse to help other people instead was a good one. The anxiety was unnecessary, it didn’t need to be a struggle.

But that explanation feels too clean and convenient. And I hadn’t gone back to read what I wrote during that time, I pretty ashamed of how much I wrote, even privately, that was dedicated to me. Reading it now, though, I see a glimmer of something else that I think is worth putting out there for other people to see. There is a painful warmth to what I wrote, like the satisfaction in sore muscles, imperceptible wounds that promise things, that lead to growth. There’s a relief in all of that fatigue, however frustrating and immature it might feel. I don’t have all the words for it, but that time in my life was the closest I’ve been to praying and there was something to it — I guess that is all prayer is for me personally, an act of repetition in dedicated to feeling faith: in medicine, in the empathy of others, in humanity.

Maybe it feels that way for you too. I don’t know.