Everyone’s worst fear in dating—is rejection.* It’s terrifying to think about the possibility that someone doesn’t want you back. At least in the abstract.

In a specific sense, the idea of being rejected by one person doesn’t scare me that much. I don’t cringe at the image of me getting curved while trying kiss the Seth Cohen type of loser I normally get ten kinds of sprung over. The image that really grosses me out is that same scene happening in a crowded room, in which everyone is subtly watching my sad, washed up display of “love me!” and I’m too clueless to notice what a fucking loser I really am.

I’d hate to look desperate in front of a bunch of people. So you could understand why having my Tinder profile shown to the American public on ABC’s 20/20 was essentially the worst fucking outcome I could imagine from using Tinder.* 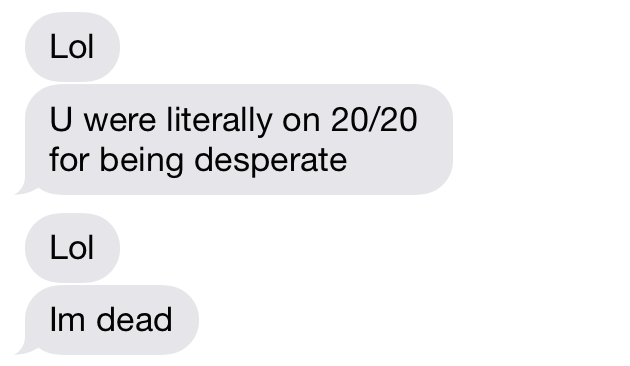 I learned a couple things from my Tinder profile being on national television. Here is the TL;DR of what I gleaned from this experience:

Online dating isn’t embarrassing, but freaking out about it is

Never use your author bio picture from Thought Catalog as your Tinder bio picture, no matter how bomb your hair looks

Don’t delete Tinder before your profile is on 20/20, because then you won’t be able to directly message the person who you matched with—who showed your blurry face and clear name on national television—and say “what the fuck, man?”

Especially if that person is the documented dickbag former CEO and founder of Tinder himself—the more you know! (Really wish I would have!)

The longer explanation of what I learned begins with the text message I received with the picture of my Tinder profile on a screen, my face blurred out like a criminal’s: “do u know about this?” 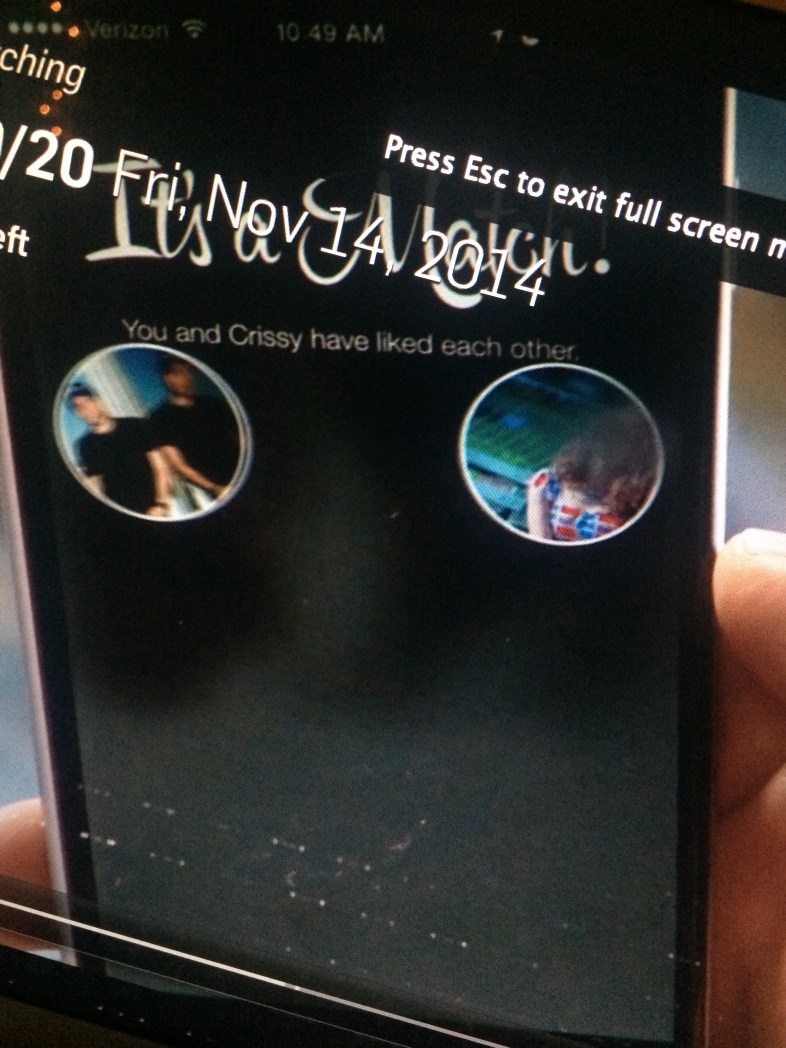 My phone died before I could interrogate the witness, so I was left to stew in paranoid ideations for the five hours it takes an iPhone 4S to wake the fuck up and be useful.

Did I know about what, exactly? Was I on some prank show that reads people’s Tinder messages out loud for funballs and laughs? Had someone made up a bunch of kinky sex stuff I didn’t say and said that I said it? What if people thought I had a mayo fetish, like that was my thing, was something with mayonnaise? Why was that my first thought, for an embarrassing reveal? Mayonnaise is the grossest fucking concept.

But I digress. Or actually, no I fucking don’t. Hold on.

Tinder is kind of gross as a concept too, but Tinder does make dating easier to swallow, like mayo does for your standard, mediocre, dry turkey sando. They’re both normal things that people use as a means to make an even more normal thing more palatable. But both things are gross things to go on and on about, like “I love just swiping through hundreds of faces in the span of minutes, judging everyone like cattle going to a slaughter, except the slaughter is the possibility of hooking up with and/or dating me, the prize! I fucking love it!” sounds kind of like “I love mayonnaise so much that I eat it all the time on everything, even on it’s own. With a spoon. With pieces of bread, just dipped in it. With my hands.”

But in moderation, who the fuck cares? Unless you’re out there on Tinder sending poetry or posting pictures of yourself with celebs or telling people how much poon you slay (read: you definitely do not, if you say poon, or slay, or anything reminiscent of that phrase), then whatever. Being the fan of the app, like “I go on a lot of Tinder dates,” isn’t even gross or sad. That’s just like, “I often use mayo on sandwiches.” Cool. Acceptable. Do you. Use the things at your disposal, you modern man or woman.

Once my phone turned back on, I was told the full monty of my non-crisis: my profile was featured at the tail-end of a 20/20 segment on Tinder and how ~hookup culture~ is a *thing* and “……why?”

Aw. What was terrifying in a dead phone k-hole spiral of self-absorption became…cute? It was a segment for the olds! The olds love to ask the kids who they’re dating! It wasn’t for the youths, it wasn’t for me to get made fun of or dragged. It was just a little clip to illustrate that this app—problematic as it may be for harassment, but productive as hell in terms of letting you meet way more people than you would if you were trolling bars and interrupting conversations, like a total dick—exists.

Tinder exists. Hookups happen. People date and get married. None of this is unusual or embarrassing. It just is. And it’s pretty hilarious, all of it, including the parts where you end up on national television because you’re single and you matched with a known dickbag who created the thing you’re trying to use to not end up stuck dating another dickbag.

I’m cool with being made an example for the olds, a quick little blurb in an even less important blip on the media radar. I’m happy that the olds are watching segments about how the kidz are doing it.

Being pathetic is pretty hilarious, for me at least, when it’s not true desperation. Even though I fear public humiliation, what’s even scarier than that is a lack of perspective; what’s even more embarrassing than being rejected or shamed by your peers for being desperate is being desperate enough to believe anyone cares in the first place.

I Thought DTF Meant Something Else, And I Wrote It On My Tinder Profile