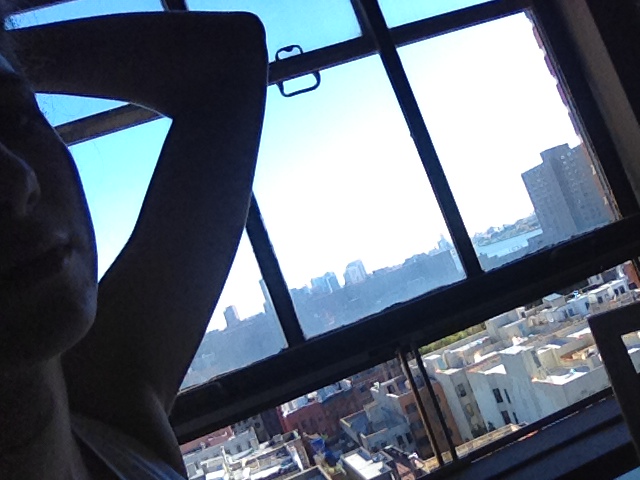 I moved to Los Angeles from New York (okay, I was working in New York and living in New Jersey, I was not a New Yorker in the carnal sense) six months ago. Those months each feel like twins, doubly long and somehow lonelier for having counterparts; I lived every day twice through by having to measure it against somewhere else. I love Los Angeles, I love it’s spread-outness, the way it shows itself like other cities don’t, highways spilling out of its head and down its back, neighborhoods gnarled muscle groups still making the same body move. But I lay next to Los Angeles every night and it breathes on my neck and holds me so close that I miss New York, I miss the way New York put me down and made me cry and then called me beautiful. In New York it feels like the whole city is trying to kill you, in Los Angeles it feels like there’s one specific person who wants you dead.

My relationship history with different cities is all sordid and spotty, full of infidelity. I grew up in the suburbs and I love them like my first love, I lost it all to them, gave away little pieces to pastel houses with nail polish linoleum floors and J Crew aluminum siding. Itchy grass was there when I needed it, filling the spaces between suspect pine trees. The suburbs in Southern California aren’t the same. The suburbs here climb hills, they’re adventurous, wealthier and made with heavy cement and burnt clay colors. They remind me of postcards, not old ’50’s photos. They look different from above, more like seashells than sheet cakes.

The first real city I ever stepped foot in was New York, of course, and it stepped back on me. The first real sort-of-city I lived in was my college town, New Brunswick, New Jersey, and fire, beer, Marlboro red’s, and the insides of elevators will always hold that college town that I left for Rome. Italy’s cities were ‘other’ entirely, they were polite and sweet, old and dignified, they were young gentleman in new suits with old money educations. But Los Angeles and New York, they came first and last. Each one makes me want the other.

There’s no need when it comes to my location anymore, so why should I miss anywhere? Every city ties you down in a romantic relationship, but with a remote job, I’m perpetually free. I’m a divorcee, I just got dumped, I just broke it off, everything could happen to me or nothing at all could keep happening to me. Why should I stay put? Why shouldn’t I go where I need to go all of the time? When New York stepped on you, why wasn’t I there?

There’s an inherent guilt in leaving a place. I felt bad when I left Rome, like I’d snubbed the marble and the endless array of bridges, ponte after ponte. I didn’t cry when I left New York but I sobbed when I went back. It was hot then, everyone was sticking to everything, casually throwing apologetic looks to each other as if we’d chosen to use the same sauna. Even then in August, I could feel the impending cold. The breeze ran down the street in alphabet city and I thought you would never show up but you did, and did again, but you’re not constant like winds down avenues. You choose where you go. Will you go down 5th again, sauntering sweaty, or will you limp?

I think New York sold me the imported rug that Los Angeles would pull out from under me.

I don’t need to be on the east coast but I want to, I want dead leaves and the smell of cold trash piled up outside some diner that you wouldn’t know was a diner unless you stopped on the sidewalk, which you never would, not in Chelsea, anyway. Subway cars, orange plastic, cold that makes your throat hurt. Streets laid down with intentions, for foot traffic. Churches with yellow glows, candles lit, warm light that tastes sacred. Tears from strong winds, scarves wrapped like arms around your neck, faithful, possessive. East coast trains off the island, moving through reeds and puddles with names into harbors that say nothing.

One night I dreamt we were all on the same plane going to the same coast, but I didn’t know which one it was and I was afraid that you wouldn’t be happy where you ended up. Maybe tonight I’ll dream the two of us on two different planes, we can take old trips, go separate ways to nowhere. Maybe I’ll take a flight back now. I want to see what you look like when your eyes can focus, how you can write the same as before anyway, loopy and specific. I want to see the weeks-old grease in your hair like everyone else gets to, make fun of you for it. I want to feel cold and feel the cold, I want you to tell me how contrived that sounds, how silly it’s all been.