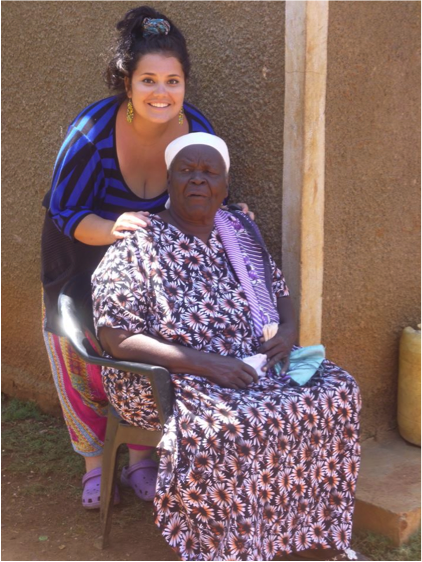 It started out like any other day in Kenya. I woke up and helped myself to some papaya and a cup of water from the rainwater tank at our compound. Then, when it was my turn to take a shower, I took my bucket of water into the tiny cubicle and used an empty lemonade bottle to scoop the water out. When 8:30am rolled around there was a sombre silence. Up until today, this would have been the time that the local Kenyan builders arrived to guide us through our community development project. We loved seeing the kind men and hearing their stories and songs as we worked on building the toilet block. But now that we had finished the project we had only a few days before heading back to Australia and we were determined to make them count.

That was when Sandra, our team leader, made an exciting announcement. “Get in the matatu” she said. “I have a surprise for you.” We climbed into our matatu – more or less the Kenyan version of a van – and set off away from the village. When we finally pulled up to a property over an hour later, the first thing that caught my attention was how nice this place was in comparison to the modest mud shacks I had so far encountered. A sign on the fence read “Property of Sarah Obama” and that was the only cue I needed to erupt into a fit of excited laughter. We’d been told that one of Barack Obama’s grandmothers (his grandfather had 3 wives) lived quite close to the village we’d spent the past 5 weeks volunteering in. But only in my wildest dreams had I actually met her.

Sarah Obama instantly struck me as 3 things: Proud, kind-hearted and feisty. She had very limited English and spoke to us through an interpreter but she was in no shortage of charisma. She spoke about her stepson Barack Obama Senior, father of the president and took us to his grave which was in her garden. Chickens frolicked around the garden and when we noticed a young girl in the distance, Sarah explained that she had adopted the girl, an orphan. What happened next I can only describe as sheer dumb luck. We were each given the opportunity to ask Sarah one question and when it was my turn, I stupidly had not prepared my question. The others were blind to my struggle and I glanced frantically around the garden, seeking inspiration. I spotted one goat amongst the chickens and blurted out to the translator “what is the goat named?” Somewhere along the lines of communication there must have been a mix up because Sarah responded “sorry but I have already named this goat.” As we made our way back to the matatu my heart sank in disappointment of her misinterpreting my question and also at having missed the opportunity to ask something worthwhile. But then I felt a tap on my shoulder and Sarah motioned me towards the rear garden next to her home. “She wants to name one of her turkeys after you,” explained the translator. I grabbed Mollie, one of the other volunteers and we followed Sarah to the turkeys as the others continued on to the matatu.

Sarah stopped and pointed at two turkeys. One was enormous and scary looking and the other was smaller and cuter and looked far less likely to attack. “Which one do you like?” the translator asked. I pointed to the smaller turkey and Sarah flashed me a cheeky smile. “What is your name?” she asked me directly. “Corrine,” I responded. She pointed at the smaller turkey and said my name, paused, then said it again slowly. I couldn’t keep the grin off of my face and my good mood must have been contagious because she too was smiling. Sometimes I wonder about that turkey named Corrine. Is it still alive? Does Sarah Obama realize that I name drop her into as many conversations as I possibly can? Does she ever look at that Corrine running around her garden and think of the 19 year old girl in the purple crocs with the sunglasses tan and the meaningless question?

Read this: Is A Bird Without Wings Still A Bird?
Read this: Epic Selfie Guy Is Back And His Newest Video Will Warm Your Heart
Read this: The Truth About Where You Belong
thumbnail image – Swaminathan
Celebrities Humor Personal Story Travel

36 Of The Most Horrifying And Disgusting Bad Roommate Stories Ever