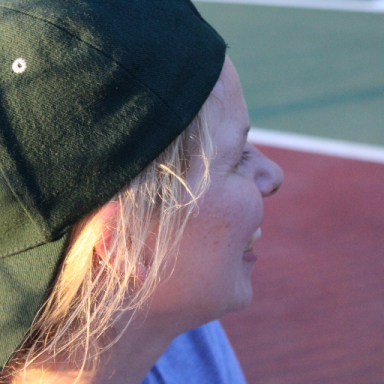 I remind myself daily that God is in control. He created the world and it is His. He cares about the lilies and the sparrows; He cares about me. He knows me better than I know myself, and He knows the path my life will take.

He cares deeply about His world and He is working in all things. He is with the broken-hearted and with the exuberant. He loves us and holds us and can do all things.

The Overwhelming World is no match for my God. When chaos and hurt and hate surround me, He is my still point and my refuge. I find rest in Him.

The Old Testament is filled with ancient heroes whose lives display God’s control in all things.

Joseph’s brothers sold him into slavery, but he worked himself up to second-in-command of his master’s house. It all came crashing down again, though, when he was thrown into prison on false accusations. But God was in control, working all things for good, and in the end, Joseph saved Ancient Egypt from famine.

David was a shepherd whose rise to kingship was marked by complicated relationships. His predecessor, Saul, established a heart-breaking pattern of welcoming and then seeking to kill David. When David did become king, first Saul’s son and then David’s own son opposed him. But amidst the betrayal, God was in control, establishing David’s throne forever.

God was working in Esther’s life, the heroic queen who saved the Jews of ancient Persia. “Perhaps you were born for such a time as this,” Mordecai tells her (Esther 4:14), recognising God’s hand in his cousin’s life as God led her to the position where she could rescue her people.

In the dark and the hurt and the fear, God is in control. He knows all things, sees all things, and understands all things. We can trust our lives to Him.

I lift up my hands in surrender. I will not fear; the Lord is my light and my salvation and the battle belongs to Him.