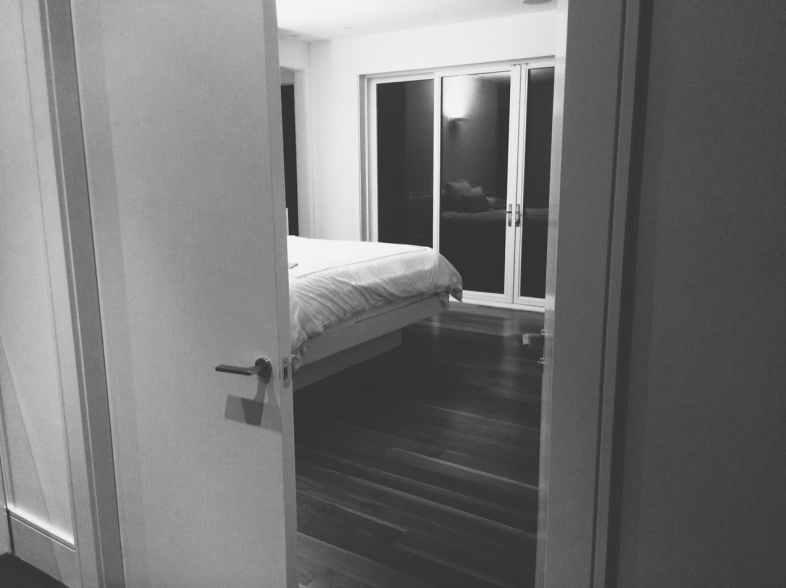 The crime scene was an impossibility. The blood, emanating from the masticated corpse on the floor defied gravity. It gained feet. Inexplicably, it seemed to dance on the floor, crawl up the wall, and waltz through the focal point above. As I examined the hole in the ceiling, I saw that it formed a pattern. It was slight but intentional. Something I had never seen before in spite of my years of experience. I let my eyes survey the scene once more. Really soaking it in. Outside of the mystifying fact that the blood of the victim decided to escape through the ceiling and the pattern that accompanied it, it seemed like the “normal” scene of a stabbing. The knife lay in the center of his chest. Everything was where it should be except for the goddamned blood. This perplexed me to say the least. I spent another hour surveying the apartment, scratching my head the entire time, I turned to regard the landlord. She had a look on her face that only confused me further. She saw what I saw. The absolute mystery of it all. But there was no perplexion on her face. What I saw was a look of understanding, of inevitability.

“Ma’am, who lives in the apartment upstairs?”

In a calculated whisper she spoke.

A chill ran down my spine. Her delivery was so certain and delivered with such sincerity that it only served to accentuate this surreal tableau. I knew then and there I would receive no answers from her.

“The Devil lives there,” pointing upwards.

She said this with the same detached delivery. I regarded her with a smile only to defuse my own anxiety. This had no effect. Nothing could put me at ease. Any further questioning was met with silence.

I ambled up the stairs. With measured steps, I approached the unit above the crime scene. My breath caught in my throat when I saw that the door was ajar. I drew my weapon and pushed the door open.

The apartment seemed normal enough. The foyer was unremarkable, and everything was in order in the adjacent kitchen.

However, the bedroom door was closed. Anxiety filled me once again, as I could see a light emanating from beneath.

It glowed and waved. It beckoned me. Before I knew what I was doing, the door was open and I was standing in the doorway.

The light was crimson. The candles surrounding the body emitted an enigmatic red light. There was a pattern on the floor, very deliberate. Ritualistic, I gleaned for a brief moment. Every time I allowed my eyes to focus on it. It seemed to shift. It careened through my vision refusing to stay constant. Unlike the body on the floor, whose stiffness only served to draw my eyes to the movement of the symbol that surrounded it.

The trance I found myself in abated momentarily. I flicked the light in the bedroom to see that the body lay off center from the hole leading to the apartment below. In my horror, I observed that the blood from below was feeding the naked body of the man that lay before me.

I turned around for a moment to call this in to my superior.

I looked back again to make sure that I wasn’t losing my mind.

The body was gone.

The light turned off.

A howling wind blew from the open windows and put out the candles.

Suddenly I could feel the breath on the nape of my neck. I stood still for a moment dreading what would lay before me if I turned around. I gathered my courage and saw hi- … it. I immediately dropped my firearm. Neck unhinged, every joint in his body danced in unison to the blood that was now filling the air of the dank apartment. The blood surrounded me. It moved in grotesque angles entering and exiting the thing that was now reaching for me.

Without a moment’s hesitation, I ran through the darkness for an escape. As I opened the door, a figure grabbed me. I fell prostrate to the floor.

It was the landlord. She had the same detached visage of terror tempered by understanding. She spoke her words to me in a whisper once again. I found my strength and got to my feet.

Those words play through my head as I lay in bed now. Repeating themselves over and over again. I close my eyes. Prayer is all I have now.

“The Devil lived there… Now, he lives with you.”

Keep up with Cliff on facebook.com