I slammed on the brakes of my patrol car. A lump formed in my throat. My mind began to race. Anxiety coursed through my veins.

Trepidation consumed me. Finally, I spoke.

“Yes, this is Officer Smith.”

“To repeat, there is a report of a domestic disturbance at 6579 Dirlact Lane. A neighbor is reporting blood-curdling screams from the address.”

I swallowed the lump in my throat accepting the inevitability of this call.

I thought to myself, am I really going back there? A years worth of therapy hadn’t healed the scars of that night. Maybe this was it. Facing this head on will give me the strength to finally put this behind me. I turned on my sirens and gathered all of my courage as I sped down the road.

I entered David’s house and drew my firearm. I carefully surveyed the all too familiar residence as I slowly inched toward the living room, drawn to the only source of light within. I took short, measured breaths as my feet found the floor. My footsteps quietly creaked into the hardwood of the modest home. The silence was broken by a sound unlike anything I had heard before. It was a pronounced gurgling sound, a nauseating noise that made my blood run cold.

My feet quickened toward the source of that sound. As I turned the corner and entered the living room, nothing in the world could prepare me for what lay on the floor in front of the TV. My childhood friend, David Bartlett was splayed there with blood pouring out of his face. I holstered my gun and ran toward him. As I neared him, I saw the full extent of the damage. The gunshot that I had heard upon arrival had entered the bridge of his nose and exited out the back of his skull. A wound like this would kill most people instantly, but David wasn’t most people. Ever the courageous and strong one, he heroically clung to life. I scooped him up in my arms. I looked into his eyes which were always so kind, so warm, glowing, and blue, and saw nothing but horror there. The tears began to stream down my face. Sadness seized me. His eyes slowly turned towards mine. My best friend was at death’s door and the misery and pain he was experiencing was ripping my heart out of my chest.

Suddenly the closet burst open and a figure ran toward us. In my haste to comfort my dying friend, I hadn’t cleared the room. I pulled my arm upward and pointed my Baretta at the approaching figure. A momentary relief filled me when I recognized the woman rushing toward us.

Blood shot out of David’s mouth. The gurgling increased in volume. I looked at his eyes once more, hoping to find some semblance of the gregarious and hopeful person I had spent the better part of my life getting to know and found nothing there. I stroked his hair as blood and brain matter spewed onto my hand. Over his wife’s panicked screaming, I looked at him and said the first words that came to mind knowing that there was little time left.

“David, buddy.” I choked back tears as I continued. “This isn’t the end. This isn’t the end.” I thought back to the Sunday school classes we attended in our youth and believed in the deepest reaches of my soul that the next words that came out of my mouth were the truth. “I’ll see you again some day buddy. I swear.”

I closed my eyes and began to pray.

I opened them to look at my friend one last time, hoping that my words or presence were providing him comfort as he passed into the great beyond. Blood dribbled down his chin as my gaze turned toward his eyes. They were filled with anguish and unfathomable fear as they stared off into the distance.

“Oh… Dear… God…” The words barely slurped out of his lips.

As he drew his last breath, David continued his laser-like gaze into the void, and the terror written in his eyes are what I see when I close mine in bed. A year of therapy didn’t change that. I was consumed with the question. What did he see?

What will we all see?

A year later almost to the day, I approached the house. My gun wasn’t drawn this time. I wasn’t expecting an armed intruder like previously. All I expected to find was a distraught, possibly delusional woman still overwhelmed with grief at the death of her husband.

As I approached the door, I could already hear Maria’s erratic voice in my head from the various voicemails she had left me.

He’s back, you know.

There’s something wrong with him.

He’s not the same.

Those words spoken with such certainty rang through my head as I tried the knob. The very words my rational mind had struggled with over the course of the past year. He had visited me as well, in my dreams at least. And he wasn’t happy. The David I had seen on those nights was a facsimile, a cheap imitation of the warm and loving person that had passed away. My therapist said to pay these dreams no mind. They were just a manifestation of the guilt I felt. Death is hard, especially if you feel responsible, but it’s something we’ll all have to do some day. My priest had similar words for me. I told him that I was worried for David’s soul. I skirted around mentioning the word Hell, but that seemed to be the only term to describe the horror in David’s eyes. He assured me not to worry. David was a devout Christian and was now in the sweet bliss of Heaven, receiving his just reward. Though their words provided comfort at times, I wrestled with thoughts about David daily. I know what I saw that night and hearing the barrage of Maria’s voicemails (from the phone calls I was avoiding) didn’t help matters one bit.

As I entered the door and began to call her name, I recalled the last time I had seen her. A couple of months ago I was on patrol and spied her walking down the street making sharp and erratic movements while talking loudly to herself. I turned on my sirens and sped off before she could recognize me.

I felt terrible, but I just wasn’t ready yet to face her and help her through the emotional torment that had overtaken her life. Every time I looked at her face, I could see his. His crimson face shattered inward and that terrible look of shock and existential dread as he looked into the abyss. Now, tonight I was going to make up for my cowardice.

A sole light remained in the living room. I inched toward it. I couldn’t help but stare at the spot on the floor where David died. The image of his mangled face interjected into my mind’s eye.

Panic filled me. Maybe this was a bad idea. I debated whether or not to call for backup and wait for them outside. My train of thought was broken when the hand grabbed my shoulder. I turned around and gasped when I saw what had grabbed me.

Maria looked terrible. Even during the short trial 9 months prior (the monster that killed David pleaded guilty to avoid the death penalty) she was a beautiful woman of only 30 years of age, but in her current state she looked like she was pushing middle age. She was dirty and unkempt. It didn’t take long for the smell to reach my nostrils.

How far had she fallen in the intervening year? The guilt I was carrying grew tenfold in an instant.

She stared daggers at me. I was surprised. I expected to find her screaming incoherently and carrying on. She was eerily calm. I embraced her and spoke.

I pulled back and she continued to silently stare into me. After what felt like an eternity, she finally spoke in a whisper.

“He’s upstairs, and he wants to talk to you.”

This horrifying statement was said with the same certainty I had heard in the myriad of voicemails clogging my inbox. I decided then and there I was going to take action to put this nightmare behind the both of us.

“He’s upstairs in the bedroom.”

As we ascended the stairs together, I became resolute that this was the best plan of attack. We were going to go upstairs, and when we found nothing, we could begin to talk about getting her some professional help.

Darkness engulfed the second floor of the home. Fear began to override my better judgment. What if we open the door, and he’s really there? What then?

The bedroom door was closed. A faint light emanated from under the doorway. She motioned toward it. I steeled myself and turned the knob.

David stood with his back to me. I knew it was him. There was no point in denying it. His presence engulfed me. The coldness it exuded was palpable. The dim light of the lamp on the nightstand illuminated his figure. Goosebumps rose on my flesh. I stood petrified in utter disbelief at what my eyes were revealing to me. Suddenly, a voice filled the air. It was my voice repeating the same statement over and over again. However, my lips weren’t moving. Impossibly, my words were coming out of David’s mouth.

“You were right buddy. You were right oh so right, and you are going to find out how right you were very soon.” This was said in a low growl that completely belied David’s soft spoken speech. He glided towards me. I came face to face with him. David was scarlet red. His whole being twisted in agony. His mouth wide open and contorted with suffering. The terror I saw on that horrid night was absolutely nothing compared to the torment that consumed him now.

I turned to run away from the specter. The doorway was blocked by Maria. In my fright and panic, I had failed to notice the knife she now brandished in her hand. After she drove it into my chest, I fell to the ground. Her voice screamed at my face.

I can feel the life slipping out of me as she continues to stab me. I close my eyes to pray as optimism pokes through my fading consciousness. I know my lifelong faith will help ease me to the other side. After making my peace with my maker, I open my eyes… and that’s when I see it.

Unfathomable terror devours whatever hope I had for the afterlife.

Words escape me as to what I am only moments away from. There are no words in any conceivable language that could convey the abject horror and torment that awaits me, that awaits us all in eternity…

Hell doesn’t even begin to describe it. 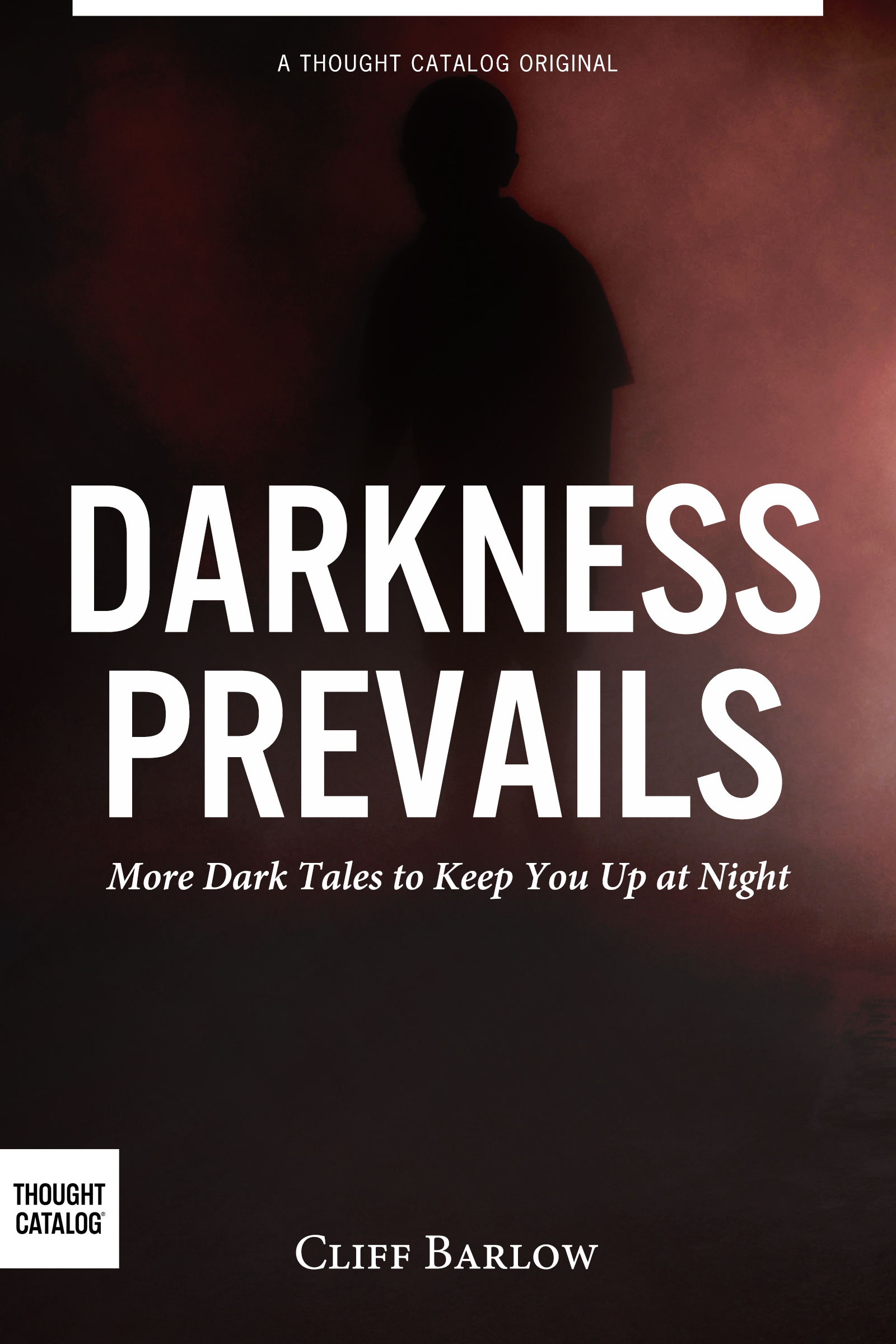