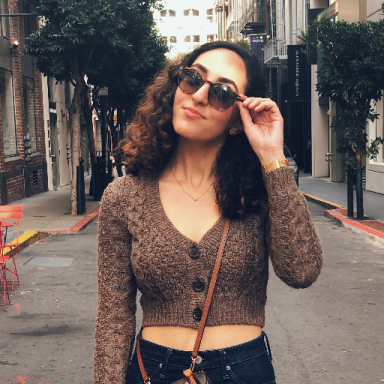 By Claudia Dastmalchi Updated May 6, 2021
Photo by artawkrn on Unsplash

By Claudia Dastmalchi Updated May 6, 2021
Photo by artawkrn on Unsplash

As I sit in Bondadoso, a local coffee shop in Walnut Creek, California, I reflect on the crazy experience I’ve had the last month.

On April 1, 2021, I met someone who changed my life. It sounds like the beginning of an April Fools’ joke, I know, and in some ways, you might even say it’s the most cruel April Fools’ joke the universe has ever played on someone.

On that fateful day, I matched with someone on Hinge and thought nothing of it at first. I had a move coming up, so my mind was preoccupied by that.

Yet, as I talked to this guy in the evenings, I started to develop an instant connection. What started out as us just inquiring about each other’s jobs and how the pandemic has affected us turned into a whirlwind of conversations—the kind you have with your best friend, where they drift naturally from topic to topic and make you wonder how you went from talking about poetry and literature to astrophysics and Pink Floyd.

I’d often heard people describe meeting someone and having an instant sense of familiarity, almost as if they’ve met them in a past life. I was never able to relate to those kinds of connections until I met this guy.

Our conversations persisted every night for hours on end. During the days, I focused on moving or work, but by the evenings, almost like clockwork, we’d start our nightly dose of stimulating conversation via text. I kept thinking this couldn’t continue; eventually, we’d run out of things to talk about.

As we talked, we came to realize how aligned we were in our values, our interests, our struggles, our thought patterns, and certain life experiences. Despite having grown up under different circumstances, we had an eerily long list of synchronicities.

Our connection began to feel like it went above what either of us could comprehend. It was then that he introduced me to a theory called Twin Flame Love. Although not backed by science, this theory, which is orthogonal to the idea of soul mates, encapsulated everything he and I had experienced—the instant familiarity, the magnetic attraction, the mutual interests, the synchronicities, the feeling that your life is about to change.

I tried to maintain a healthy skepticism of the theory and avoid fitting our dynamic into that box, but I couldn’t ignore the parallels.

After what felt like a lifetime of waiting, we finally had our first date, and it was everything I had hoped it would be.

We grow up surrounded by movies that paint this idealistic picture of love and meaningful connections. My younger self absorbed all these fantasies like a sponge and held onto them tightly. As I grew, part of me started to doubt if these kinds of connections even existed and started to lose faith in that serendipitous flavor of love.

This first date awakened that inner child in me who held onto that Titanic-esque fantasy, despite me tucking that part away for some time. The entire date felt like I was living out my own romance movie. He picked me up on a motorcycle, presented me with a gift, took me all around the city, treated me to a rooftop dinner, and ended the date with us going on a Ferris wheel.

It was the perfect date.

But if approaching that first date was like a rollercoaster approaching the peak of the track—exhilarating and full of anticipation—the following week was when everything came crashing down. There was anxiety. There was fear and that sneaking suspicion that the rollercoaster would never go back in the other direction, or at least level out.

As magical and mutually enjoyable as that first date was, it made the guy question whether or not he was truly ready to move on from his last relationship, which he had officially ended only a couple of days after talking to me (and did not tell me until right before our first date). Suddenly, his inner state of turmoil and confusion translated into sending me mixed signals for the next two weeks.

Every day, I would wake up in this state of anxiety and despair, wondering if the connection would disappear as quickly as it entered my life. By the time we approached our second date two weeks later, any excitement I had to see him again was overshadowed by anxiety.

Sure enough, during that second date, his energy was not the same as it was on the first one. He seemed withdrawn, consumed by his thoughts, and stoic. That in turn made me more withdrawn and quiet on the date, like I couldn’t let my guard down anymore.

At the end of the date, I couldn’t ignore the elephant in the room anymore and had to ask where his head was at. He disclosed that he had started talking to his ex again and that it was hard to move on when she was still in his life.

I sat there quietly, trying to digest what he’d just told me.

“So what does that mean for you and I going forward? Do you want to keep seeing each other?” I finally asked.

His response was vague and didn’t leave me feeling hopeful.

Finally, as I started to leave, he walked me to my car and apologized for this weird state he was in. He gave me a long hug and told me to drive safely.

I stood there for a moment, frozen like a deer who’d just locked eyes with its predator. Eventually, I got in my car and sat there, trying to make sense of the stark turn of events.

Tears welled up in my eyes and I called one of my best friends to tell her everything in my half choked-up state.

A week has now passed since that last encounter and I still haven’t heard a thing. All I’ve been left with are my own thoughts and memories. It was like I had lost myself in a romance novel for the last month, but right as I was approaching the ending, someone snatched the book away. You instantly feel this lack of closure and start hypothesizing how the book could have ended. Those “what ifs” can drive you crazy if you let them.

After a while, I finally made myself realize that just because I didn’t see the ending of the book doesn’t mean the story didn’t still end, and that in itself should serve as closure.

Throughout this last week, I’ve replayed the last month in my head many times, trying to comprehend what happened and how well I could have foreseen this turn of events. Each time I recounted the story to myself, I picked up something new and kept a running log in my mind of all the lessons I had learned.

Weirdly, I tried to detach from myself and assume the role of a therapist, trying to look for any patterns of behavior or personality traits that could have led me to this place.

At the same time, I was listening to self-help and relationship podcasts, throughout which something kept popping up like a neon sign that seemed to say, “Hey, this could be one of the answers.”

Both of the podcasts touched on the struggles empaths face in finding a relationship. They discussed how empaths tend to look beyond what’s in front of them and develop an image in their mind of who the person could be. They tend to look at things with rose-colored glasses and give people the benefit of the doubt because they want to believe the best in people. Their hearts yearn to “fix” others and patiently wait as they morph into the ideal they have in their head.

While compassion is something to be commended and amplified, it also comes with its fair share of drawbacks, especially if you forget to direct it toward yourself in equal magnitude.

Empathy often goes hand-in-hand with those who are sensitive and feel deeply. Thought Catalog’s Creative Director, Bianca Sparacino, beautifully described empaths as being like a fire to which others feel drawn. Others, particularly those who need to mend themselves, will feel compelled to “warm their hands by the light of your fire,” which, over time, could deplete your energy.

This was a huge wake-up call for me and started to explain certain patterns I’d developed in dating and relationships. I stayed in a four-and-a-half-year relationship in large part because I felt hopeful that the guy would live up to the potential I saw in him. I explored dating with back-to-back guys who had recently come out of long-term relationships and turned out to be emotionally unavailable.

We empaths get so lost in the potential that we forget to internalize and invest based on what’s right in front of us. We need to set better boundaries and be careful of whose hands we let near the warmth of our fire, lest they put it out completely.

Some people may come into our lives and take advantage of our understanding. They may misconstrue that understanding for limitless strength and consequently think we can “handle” any of their issues. If left unchecked, they can come into our lives and completely shake us, ripping through our world like a tornado and carrying on with their destruction while we’re left to deal with the aftermath and pick up the pieces.

There has to be a balance between showing empathy for others and showing it for ourselves; it should never be at the expense of ourselves. We should also be selective about who we go above and beyond in extending that empathy for.

Sometimes it takes falling on your face a few times before you realize what keeps causing you to trip. While I would have preferred a less hurtful way of learning this lesson, I’m thankful that I finally learned it.

I hope that I can pass on this wisdom to others and maybe, just maybe, prevent them from falling on their face too.

A nomadic and curious soul currently living in the Bay Area. Follow Claudia on Instagram or read more articles from Claudia on Thought Catalog.

It’s Okay To Be Alone. You’ll Be Fine, I Promise.

Just Lie About Your Age

With The Right Person Anything Is Possible

This Is How It Ends When An Empath Loves A Narcissist