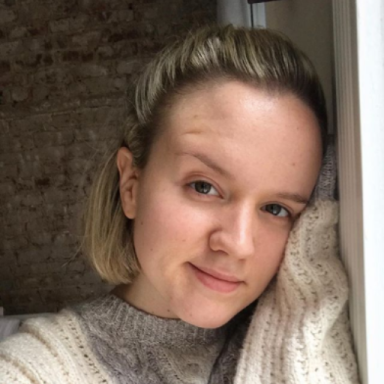 In the first few months of my recovery from anorexia, back when the food legalization process was just beginning, I found myself head-over-heels in love with the ritual of breakfast. After years of feeling guilty if I ever ate something above triple digit calories before noon, the sudden shortage of regulations around my permission to eat had me buzzing like a kid on Christmas morning. The freedom was frightening, but exhilarating – for the first time in my life, I was allowed to eat what I wanted, when I wanted. I was allowed to have an appetite. I was allowed – encouraged even! – to eat frequently and without restraint. Gone were the days of having to fight the feeling of hunger. There were no more foods to fear. For lack of a better way to say it, it was expletive-levels of awesome.

One particular morning, while at work enjoying a lusciously fluffy frittata (a dish quickly becoming known as “my thing” around the office), a co-worker sauntered over to my desk with some paper for me to shuffle.

“Frittata again?” she questioned, eyes fixated on my tupperware.

Mouth full of food, I nodded energetically in her direction.

She turned, paused, then looked back at me and said: “….How many eggs do you think are in that?”

I instantly deflated. My heart sank. It was like this person threw a flaming poisonous apple into the garden of my anti-dieting eden. Up until that moment, it had never crossed my mind how many eggs were in the frittata – my only focus had been how delicious the frittata tasted and how much energy it gave me. It was a corruption of innocence I’d thought only possible in the realm of Victorian novels, not something one person’s judgment-laden tone could trigger. But there I was, frittata in lap, stung silent by the familiar fizzle of food anxiety now tip-toeing back through my veins.

I wish I could say this was an isolated incident, but anyone who’s ever worked in an office environment would recognize this exchange as commonplace. This interaction is the socialization of diet culture at its finest – a paradigmatic display of the way weight obsession and food fixation needles its way into the fabric of our daily conversations.

How many calories are in this, how many grams of fat are in that. “No thanks, I need to be skinny today,” one woman replies to a colleague suggesting burgers for lunch. “If I go to the gym every day this week, I’m having one of those Pop Tarts on Friday,” another says in the communal kitchen, eyeing the snack cabinet with longing. The juice cleanses, the counting of the almonds, the endless sea of empty Diet Coke cans, the constant checking of the FitBits and JawBones and Apple Watches.

Writing about diet culture is nothing new, nor is bewailing annoying manifestations of diet talk anything novel. Countless articles out there lament the incessant white noise of this insipid cultural practice. But too many accounts settle for diet talk being an inescapable part of our society – writing it off as an irritating, though ultimately benign form of sociability that we can mock, but in the end must resign ourselves to accept.

Diet talk is a dangerous and sinister pathology.

It is a toxin that pollutes our brains and feeds our anxieties around food. At best, for the unicorn “normal eaters” out there, it desensitizes harmful projections of fat shaming, body surveillance, and food policing as status quo tactics human beings use to establish commonality. At worst, for vulnerable brains in the early stages of eating disorder recovery, it can incite a powerful hurricane of temptations to re-engage with old behaviors (urges to binge, compulsions to purge, pressures to restrict).

Let’s return to my frittata for a second. While on the surface my co-worker’s commentary may seem innocent enough, turning a critical ear on the tone of her delivery reveals far from innocuous implications. As a woman desperately trying to break out of the diet-binge cycle and normalize my own relationship with food, drawing attention to the quantity of eggs in my meal – and by extension issuing judgment on my consumption choices – chucks a rock into the window of my recovery. What relevance does the number of eggs in my frittata have unless there is an implicit fear being mongered about “how much food is right” and “how much food is wrong”? What I was celebrating as a recovery win minutes before is now quickly devolving into a recovery crisis – the mental muscles of my disorder tingling with painful reminders of all the “should’s and shouldn’ts” and “good’s and bad’s.”

What people often fail to understand about recovery is the spontaneous fragility of its process. Eating disorders have a calculatingly wicked way of preying on us when we least expect it – they lurk around the corners of gray-area situations purposefully to capitalize on moments when our defenses are down.

Diet talk invites exactly the kind of gray areas eating disorders await – the situations where our knee-jerk reactions to restrict, delay hunger, and resist fullness are easier to trigger.

The uphill battle becomes precariously steeper, demanding Olympic-level mental energies from the person in recovery to keep from falling down.

Do I believe that those who engage in diet talk do so with malicious intent? Not necessarily – though in some cases, I think it can be an incredibly manipulative and sinister projection of fatphobia (especially when made in the presence of larger bodies). But I do believe that continuing to participate in and tolerate these kinds of conversations creates tortuously hostile environments for people (both those touched and untouched by disorder) to suffer through. I do believe that diet talk is emblematic of toxic weight-discriminating social norms and oppressively narrow standards of beauty. I do believe that diet talk is a legitimate form of harassment – though one that’s difficult to pinpoint because of its careful disguise under the casual timbre of everyday chit-chat.

I do believe that diet talk is wrong.

So, people of the workplace, I beg of you: please stop talking about your diet. Stop talking about how much weight you’ve gained or how much weight you “need” to lose. Stop pointing out how many calories are in my yogurt or how many eggs might be in my frittata. Stop telling me how “fat” you feel today or how “bad” you were this weekend. Stop all the histrionic proclamations about how AMAZING the pastries in the kitchen look but then when someone offers you one say, “OH, no thanks, I’m trying to be good.”

In the meantime, for those of us on the receiving end of diet talk, stay strong. Don’t let the racket of our culture’s obsessive neuroticisms around food corrupt the sanctity of space you’re rebuilding in your brain. Remember that this process is about trusting your voice – not theirs.

I spend a lot of time agonizing over whether Tony Soprano lived.