There was a moment in my life, a brief fleeting period, lasting only the length of a slow, deliberate blink, when, well — this feels like a cringy humble-brag, but I promise it’s not — I was… mildly attractive.

Or maybe I was just cute.

I’m not telling you this because I want to. I’m telling you because I have no choice. If I don’t, you’ll think the rest of this story is complete bullshit and be all, “Liar!! None of this happened! It’s been well established that you look like a depressed hairball with dry skin!”

But trust me. I’m not bragging. It’s just required so you won’t scoff in disbelief at the following story.

Now, I attribute most of my momentary cuteness to youth. When you’re young you can get away with a lot. However, even youth is no guarantee you’ll pass a “No uggos” purity test and, during my mid-teens, I was a misshapen bag of retainer wire, bad posture and clown hair. But I was a late bloomer and once I transitioned from gawky teenage blob to “Are those cheekbones?” things started to change.

I had no idea I was vaguely okay-looking until after I’d graduated high school and a ridiculously hot guy asked me out. That’s when I got suspicious that I was no longer all rabbit teeth and chubby cheeks and maybe the dental work and proper application of eyeliner was having an effect.

Jake* and I were in the same college math class, which was the first clue that our relationship was doomed to failure.

Relationship Tip #1: At least one person needs to be able to calculate percentages.

I genuinely cannot recall a single conversation we had prior to our first date because we likely never had one (that lasted longer than 12–14 seconds). Our interaction primarily consisted of standing around after class exchanging furtive glances and pretending we just happened to be occupying the same general area at the same general time for no apparent reason. He always looked confident and gorgeous while I just tried to stand up straight and not to make any unintentionally weird faces. Eventually I’d work up the courage to attempt the sort of awkward small talk reserved for shut-ins who’ve been inexplicably dropped in the middle of Times Square. Stuff like, “H-hi,” followed by profuse sweating and running away.

Then one day, after verifying with my friend that I was single, Jake asked me out. **

The night of our date is seared into my brain with one particular moment standing out because it remains one of the most odd conversation non-prompts I’ve ever heard. He arrived at my parent’s house and, as we walked to his car, for some reason, he declared, “I’m 6’4”, 200 lbs.”

After we drove around for ten minutes in near silence while he decided between TGI Friday’s and Fuddruckers (he finally settled on Fudd’s due to their selection of cheese-like sauces), it was clear somebody needed to kick this date into gear, so I asked him a series of typical first date questions:

“Did you grow up around here?”

“Do you have any brothers or sisters?”

“How many words do you know?”

It was like having dinner with a really good-looking 6’4”, 200 pound, tree-stump.

Relationship Tip #3: You probably already know this one but: Don’t date a tree stump. 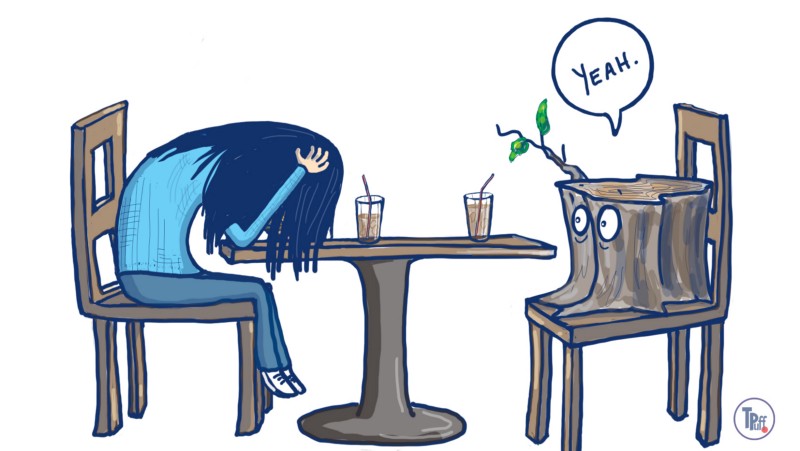 He asked me exactly this many questions: ZERO. And apparently decided that I was the boring one since he started watching the football game on the TV mounted above my head.

After dinner, we went to see a movie, his favorite movie.

The Movie: Armageddon (That’s the movie title…not the date. The date was bad, but the movie is worse). ***

Sitting in the theater, I was quickly growing bored and disillusioned. To cope, I had this indifferent, teenage girl habit of grabbing a small lock of my hair and twirling it around my finger. Every time I did this, he would lightly tap my hand and in his deep, sexy, tree stump voice say, “Stop that. Now, watch the movie.”

Oh, NUH-HUH. You didn’t just tell me to stop twirling MY hair and watch this Michael Bay cum-splosion did you? ’Cause, fuuuck yooou.

But I was far, far too nice/passive/dazzled by his green eyes to actually articulate my annoyance. The closest I came was when I spaced-out during the asteroid-blow-up-Bruce-Willis-sacrifice scene and fantasized that I said, “No offense but, you’re fucking killing me with this dick-suck of a movie. Never call me again.”

Finally the movie ended. I immediately feigned exhaustion with fake yawning and half-assed apologies for being really, really tired. “I got up super early. I should probably get home.”

We pulled up to my house and, before I could unbuckle my seat belt and politely run from the car, he told me what a great time he had and that he wanted to see me again.

Oh really? Which part was the “great time” part? The part at dinner when you degenerated into an inarticulate slab of (absolutely gorgeous) beef, grunting half-answers at my repeated eager attempts to get to know you?

Or the part when you ignored me and watched a football game while I ate another basket of French-fries BECAUSE YOU TOOK A VEGETARIAN TO A BURGER BUFFET (actually, the fries were REALLY GOOD, BUT I’M STILL MAD)?

Or the part when we sat in the theater for TWO HOURS AND THIRTY-THREE MINUTES staring at a pre-CGI space-pocalypse, listening to Steven Tyler whine about watching people sleep and then you forbade my offensive hair-spinning while Liv Tyler stopped pretending to have a career based on talent?!

As someone who grew up pummeled by society’s generally unattainable beauty standards (like all women everywhere and more than a few men), this was an important moment for me. Having never dated a friggin’ hot guy before, I’d assumed such an evening would be INCREDIBLE. As if his beauty equated to a winning personality and would, per every romantic comedy ever, magically solve all of life’s problems. In his company, I would suddenly transcend all pesky barriers to complete happiness.

Relationship Tip #8: Don’t expect another person to make you happy.

Instead, I discovered that “Yes Virginia, even hot guys can be meh.”

Not really. I went out with him one more time.

BUT, in my defense, he was really, really (reallyreallyreally) good-looking and then I swear we never went out again. *****

In hindsight, I’m not sure Jake’s apparent dullness and reticence to speak were some deep-seated character flaws. Perhaps, despite his appearance, he was shy and insecure. And maybe I was just too taken by his looks to notice.

After Jake, I went out with a few more “hot guys.” And each time I made the shallow, unfair assumption that physical beauty was a guarantee of relationship perfection. Then, as with all humans, they turned out to be imperfect.

But really, who wants perfect? Perfect’s boring. Perfect has nothing to say. Perfect likes Armageddon. Besides, I’m so far from perfect, it’s disgusting.
Literally disgusting.

The obvious truth is, looks do not and never will, make the man or woman. So what if he (or she) looks “perfect?” If there’s nothing underneath all that perfection, you might as well be 12-years old, sitting on the edge of your bed asking your Teen Beat centerfold of Keanu Reeves if he likes your new perm.

’Cause at some point, you’re just talking to a wall. A really handsome wall, but a wall nonetheless. 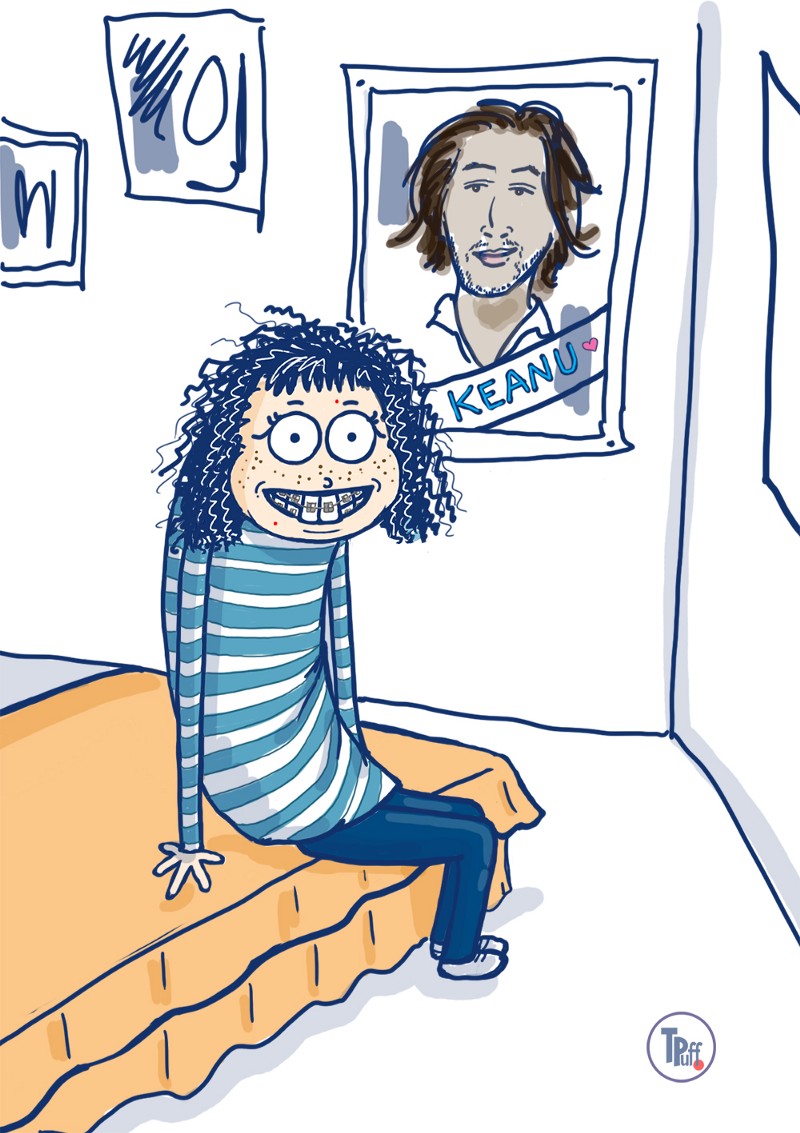 * Not his real name. Many thanks to John Hughes and Sixteen Candles for providing such a helpful “hot guy” template. I hand-drew the above images of Jake Ryan based upon several different stills from the movie.
** Actually Jake asked me out twice because the first time he asked, I said — wait for it — “No”. If you wanna know why, read, How My First Boyfriend Ruined 1998.
*** Dear late-90’s Bruce Willis and Aerosmith fans and people for whom Armageddon is Citizen Kane, I’m sorry. I will now punish myself by listening to “Dude Looks Like a Lady” while watching Hudson Hawk.
**** My husband, Sherman, reads all of my blogs and has requested that I include the following information: Not only is Sherman hot, but he’s also a whiz at percentages and would never tell me not to twirl my hair while we watch Armageddon (ironically).
***** Okay, maybe we got coffee one last time but then I swear, that was it.

Outraged and cynical at parties. Draw-er of things. Vegan. Otherwise known as ThunderPuff. Follow on Medium.