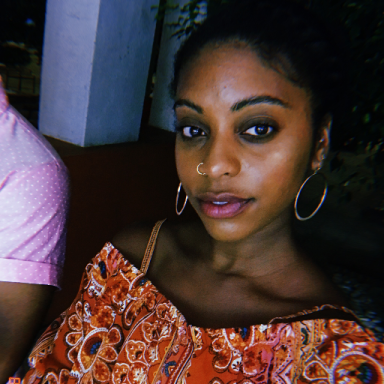 Imagine a world in which women were actively praised and moved up the womanly scale for growing hair out of the places in which it naturally grows—hugging their moms, high-fiving their aunties, and chest bumping their besties for the thickening of the peach fuzz over their top lip.

I remember feeling so ashamed of my 10-year-old fuzzy twig legs. During the summer before fifth grade, it seemed like every girl at every pool party was strutting around wearing their band aids like badges of honor from their war against cheap razors. I was always cautious and calculated, wearing board shorts over my bathing suit bottoms to fully cover the wiry curls that were beginning to creep from behind the edges. And on top, a swim tank to conceal the dark, course trail down my tummy. By the following summer, I had sworn off shorts. I wanted everyone to believe that it was in protest to the middle school male gaze, but that was only half true.

Ultimately, it was the look on Bekah’s face that did me in. Standing in the shallow end of her backyard pool, our eyes met while my arms were raised over my head holding a large inflatable beach ball. Her eyes widened in what seemed like slow motion. Her nose crinkled and mouth puckered as if she had just tasted something sour. I was having so much fun, I had momentarily forgotten about the new furry patches sprouting under my arms.

Her disapproving gaze squished me like the hairy, long-legged spider I felt I was becoming.

It was time for me to become a real lady. Time to shed the unsightly, unbecoming, unclean layer that had even made it down to the tops of my toes. Time to lather my legs with smelly, stinging hair removal creams. Then a level up—balancing on one leg on a slippery surface, trying not to cut myself or miss a spot. Bring on the hot wax. One hit to the chin, above the lip, and then right between the brows. Time to be an acceptable lady.

I learned to measure my desirability by the length of the prickles on my body.

The ideas about what I was supposed to think about myself were already made up, and like a gaseous poison, they’d seeped into my brain undetected.

Then, standing at the sink in a tiny two-stall restroom, I examined the unscathed hairs on my arms as the water began to trickle between my fingers. A woman whose wrinkles preceded her wisdom stepped up to the sink to my right. She smiled as she looked me over and our eyes connected over the dusty brown wisps on my forearm, and she said,  “You have hairy arms…That’s sexy.”

What an awkward and bizarre thing to say to a preteen stranger, I thought to myself. I’d never heard anyone say that hairy arms were sexy, and definitely not my hairy arms. She left and I stood there, confused. But in those few seconds standing there alone, I looked back at myself and grinned, feeling empowered in my own hairy skin for the first time.

There were a million moments before that and a million since in which I’ve been made to feel like I have no choice in the matters of my body. The message: If I want to be wanted, I should give the boys what they think they want. No questions asked. It’s just what a lady does.

But I’m thankful for the lessons that life continues to teach me about the woman I am. Today, those impossible expectations and manmade rules just roll down the hairs on my back like cool water. Or sometimes off my hairless back, because that’s my right. It’s my right to feel sexy and empowered the way I choose to.

No apologies if it offends you.

Figuring out where I fit in all of this.