I’m so difficult to deal with that I’m astonished when friends still invite me to do stuff. Getting me to attend things is like pulling teeth, or successfully grabbing a doll in a rigged claw machine, or pushing that pesky yellow straw into a Capri-Sun’s tiny hole.

In a way I feel like being self-aware enough to know that I’m awful somehow makes me less insufferable than someone who is oblivious to their exhausting personality, but that’s probably just a thought I entertain to alleviate my shame.

I’m not difficult in a let’s-do-what-I-wanna-do-or-else, selfish, diva NFL wide receiver type way. It’s just that I suffer from the inability to straight up say “No” to things. “No” would legitimately eliminate 75% of my weekly stress, but I can’t bring myself to utter that single syllable for a few reasons:

The indecisiveness is a huge issue, because people want committed yeses or nos to anticipate your presence or lack thereof, but I prefer living in Maybeland. 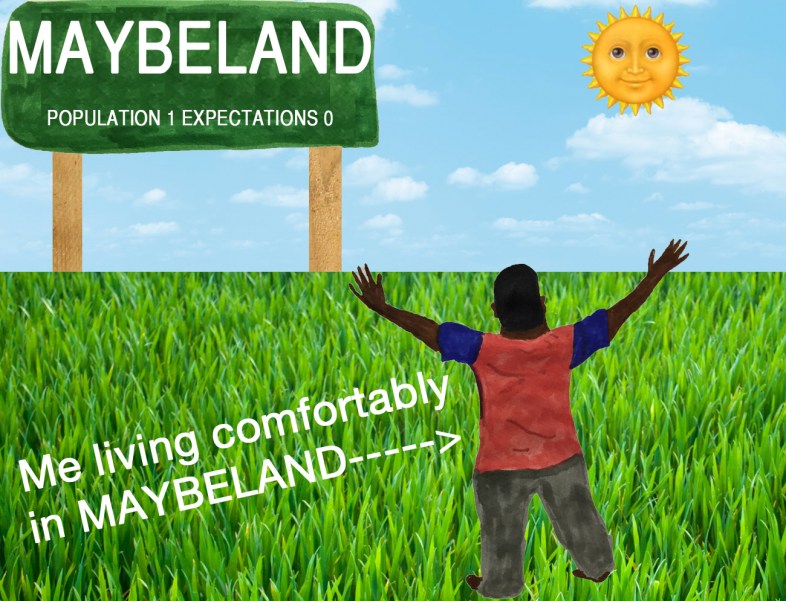 Maybeland is a beautiful pressure-free zone where no promises are made, and if I show up to the places I’m invited, it’s a great bonus, but if I don’t, that’s completely fine too. When I’m on the fence about doing something, I’d rather not write checks that future me might not feel like cashing. I’ve done it before, and in that moment, Present Me is so resentful of Past Plan-Committing Me. In Maybeland, RSVP’ing is illegal, “commitment” is a cuss word and “I lost track of time watching YouTube videos” is a socially acceptable excuse for missing run-of-the-mill stuff, like Sunday brunch plans, a happy hour gathering, or a close friend’s wedding.

Unfortunately, missing things is considered very uncool, and saying “maybe” to invitations usually results in immediate pressure. “Maybe” begins a verbal tug of war, and the other side tries with all its might to pull me into the uncomfortable, dangerous Pit Of Commitment.

Sometimes I’m strong enough to hold my own. 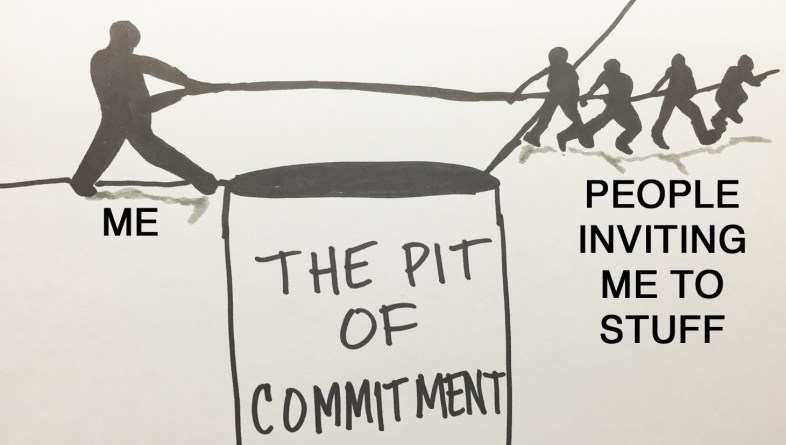 Other times I’m weak, and say “yes,” plunging into the Pit Of Commitment.

However, the thing that probably makes me most frustrating and difficult to deal with is that, even if you win the tug of war, I still might find a grappling hook at the bottom of the Pit Of Commitment, and make a daring, Batman-esque exit. I’ll elusively, selfishly float away, usually with some lame reason as to why I can’t follow through on the plans. A number of friends may try to hinder my escape by attempting to shoot down my excuse, but once I’ve set my mind to bailing, then bail I must.

A similar version of this process happens entirely too often, yet somehow I still get invited places. Anyone who is indecisive and/or not comfortable committing to plans, but also incapable of saying “no,” has experienced this struggle. Could we make things easier on ourselves by utilizing the word “no” right off the bat, or having better, firmer decision making skills? Probably. Do we? No, no we don’t, because we’re protecting people’s feelings from rejection. “No” is the response some invitations deserve, but not the one they need right now.