There are so many social media platforms out right now that it’s difficult to be active on all of ‘em. The digital diarrhea has overwhelmed me so much that I constantly neglect Twitter, never use Vine and have failed to even create a Snapchat. I figure since I’m already behind, why not regress a little more and go back 10+ years to the place where I first social media’d, MySpace. I’d estimate the vast majority of folks stopped MySpace-ing around 2006 or 2007, maybe 2008, but even then it was like the awful, final season of a TV series that should’ve died earlier. So, let’s go take a look at what it’s like on MySpace in 2015.

Well, this is a new look. It appears as if someone’s trying hard. It has a very stepdad-wants-to-impress-his-new-stepson-with-pop-culture-themed-bedroom-design type vibe, so A for effort. Unfortunately the 2015 Myspace layout looks like MSN and Yahoo!’s homepages made a baby, but then they went on Maury and found out MSN was not the father — AOL’s Homepage is actually the baby daddy. Regardless, I’m all in, it’s time to make this MySpace.

Is this not a conflict of interest? Two of the three methods you can use to join MySpace are the exact platforms you left MySpace for — Twitter and Facebook. That’s like trying to win back your disloyal ex by inviting them to dinner with the people they cheated on you with.

As you’d expect with any social media site, MySpace asks for some basic information. That bright red arrow is pointing to a huge bonus of joining MySpace – the ability to have virtually any username you want, because there are only twelve other people here. No periods, underscores or numbers required, hooray!

“What are you about?” Take it easy, MySpace. “What are you about?” feels like something an aggressive bro would ask during a confrontation outside of a bar on Thirsty Thursday, because you accidentally bumped him and he spilled some of his PBR, and now he wants to ask you in the most intimidating fashion, what it is that you are about.

Here is what a bare, freshly born MySpace looks like.

Here is what my completed MySpace looks like and I’ve got to say, things got anticlimactic real quick, folks. I mean, what do I even do now? Where are the surveys? Where’s the option to customize my profile? I want to copy and paste codes until my page is covered in tacky gaudiness like old times! Oh, and more importantly — WHERE ARE ALL OF THE PEOPLE? I didn’t even get Tom as an automatic friend; all it does is list the official MySpace account under the “People You’re Connected To.”

There legitimately appears to be nobody here. If there were digital tumbleweeds, one of them would certainly blow by right about now. As disappointing as this is becoming, I will say that I’m amused to see this still being a thing:

The good news is that you can still have a Top 8, the bad news is that absolutely nobody you know in real life is on MySpace to put in your Top 8. When I click ‘People’ on the sidebar, I’m shown Enrique Iglesias, Sam Smith, Justin Timberlake and various other celebrities I’ve seen on TV, but have a sneaking suspicion wouldn’t be available to interact with me on MySpace, even if I try to win them over with a coveted spot in my Top 8.

It appears there’s nothing to see here. The only way to locate friends is to link your MySpace to Facebook or Twitter, and even then you’d have to hope that your Facebook friends or Twitter followers have linked that account to their MySpace, which in all likelihood they haven’t because 2015. Being on MySpace feels very last-person-in-the-world-y right now, and if anybody is out there, or interested in making their return to MySpace, please let that be known immediately. The levels of disappointment here have led me to the settings, where I found this very attractive button that I’m tempted to click on: 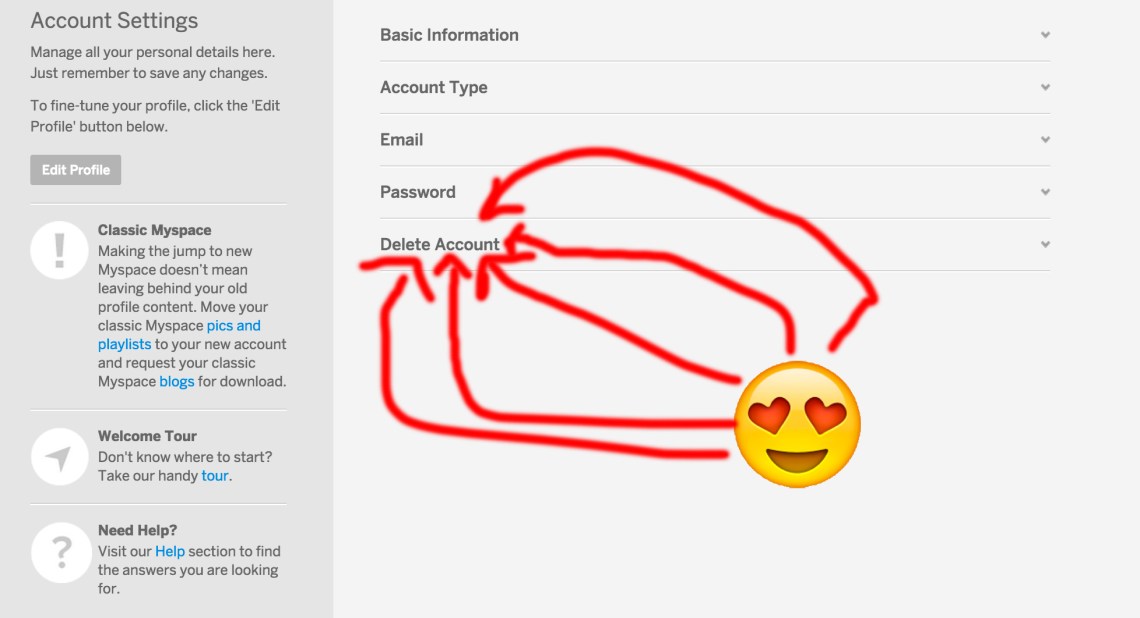 Here’s my final advice for MySpace:

Stop everything you’re trying to do right now and literally go back to being the exact same site you were a decade ago. Go back to the old layout, go back to the HTML customization options, go back to not being the website version of that kid from high school who had so much potential but somehow managed to wind up a disaster on two legs. Sometimes people need to evolve and sometimes change is good – this is not one of those times.

I assure you, MySpace, if you changed everything back to the way it was, you’d see the return of the masses, even if they were just curious to experience a brief blast from the past. Don’t join Zunes, Blackberries, HD DVDs and McDonalds McSalad Shakers as things that could’ve been elite, but instead disappointed everyone who believed in ‘em. This wasn’t as awesome as I thought it’d be. I’m going to go shower myself in tweets to wash off the stale social media funk left on me by 2015 MySpace.