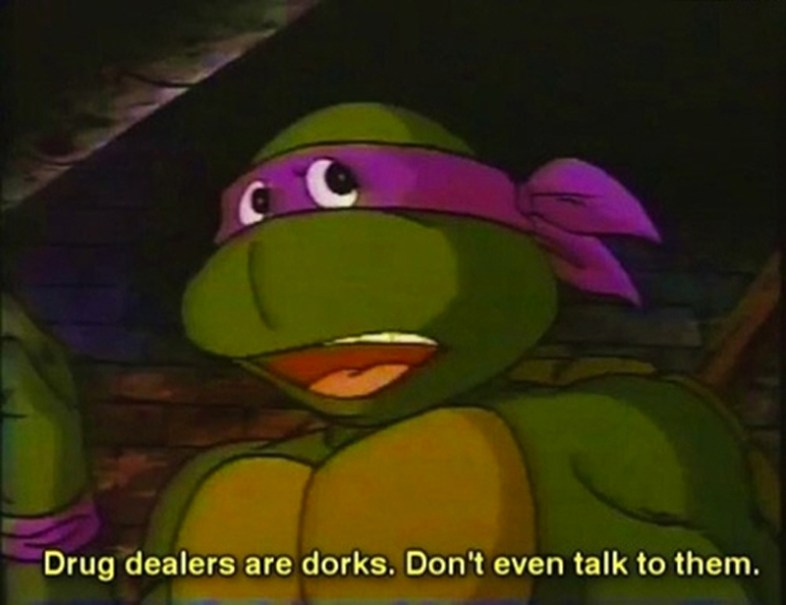 This dude goes from human to demonic snake within a matter of moments, which is equal parts creepy and confusing. I can appreciate the “deal in poison” wordplay, but what’s up with the “cheat on your homeboys” thing? What does that even mean, 1980s?

Is this an anti-drug or pro-cleaning commercial? It actually features a catchy song, and it feels like a talented musician with a yearning for some meth cooked up the hit.

“DRUG DEALERS ARE DORKS, DON’T EVEN TALK TO THEM.” – Donatello, keeping it real as heck. This ad’s creator probably wasn’t on drugs, but it’s such gold that it’s worthy of being a part of any anti-drug commercial compilation.

HEY MIKE TOO LATE you already did drugs, that’s why you’re reliving the same 3 second loop over and over again. You’ll come down from that high soon, and realize that your Sam-I-Am persistent friend actually already got you on the green eggs and ham.

Talking dogs aren’t a thing that people who aren’t on drugs come up with. This smug talking dog thinks he can just hop on the chair, condescendingly bash his friend and then casually see himself out? Real cool, Cujo.

+1 for super eerie brief seconds of singing at the end.

No Pizza If You Do Drugs

WHAT ARE YOU EVEN TALKING ABOUT, PENNY? The principle’s office OR jail? There’s a big difference between those two things. I appreciate the point about no TV or pizza though – because priorities.

The question is how eerie is too eerie? The answer is this eerie.

Dang, 1980s anti-drug ads, you scary. The problem here is that you can’t show people horrifying commercials like this or they become impervious to fear, and nothing they could possibly see on drugs is as disturbing as this ad.

Kids Are Snorting Smarties Like Drugs And Getting Maggots In Their Face. I’m So Done With This World.