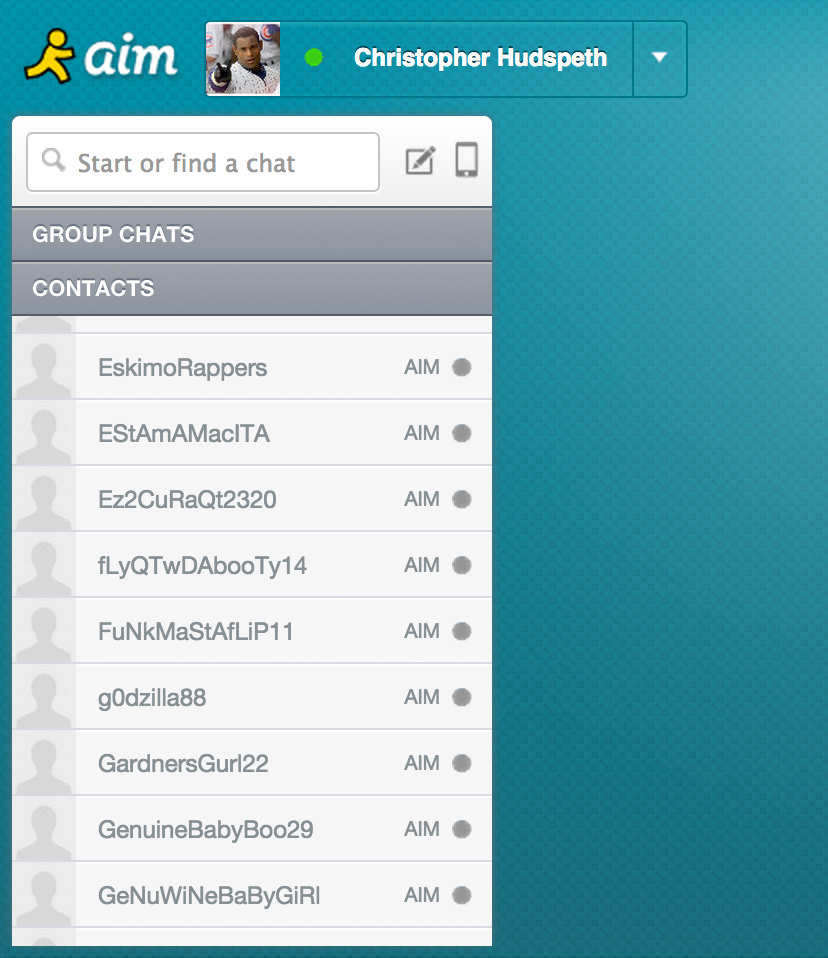 If you’ve ever wondered what happened to the things you put on the internet a while back, then callously abandoned in the mid-late 2000s when cooler alternatives popped up, here’s the answer: It’s still there — at least, some of it is. While our LiveJournals may be collecting dust and our malnourished Neopets have ceased to exist, take comfort in the fact that your AOL Instant Messenger Account has yet to fold. I entered my information and impressively got the password correct on the second try.

Upon scrolling through my contacts, I was hit with a wave of nostalgia. My screen name was SosaWebber23, a tribute to two of my favorite athletes of all time (Sammy Sosa & Chris Webber), plus a 23, representing August 23rd, the day I was born. Remarkably creative stuff, I know, folks. However, when I scrolled through my contacts (cleverly filed under ‘Ladies’ and ‘Fellas,’ respectively) I was blown away by the choices some of my peers made. Brace yourselves, for here are 31 100% real, actual, screen names that exist, and were worn proudly circa 2003.

Whoever this was, I’m sure they were edgy as h*ck, listening to System Of A Down on their bulky, blue iMac G3 in computer class.

Someone once said, “No matter how bad things are, you can always make things worse.” That doesn’t apply to badthangs, but still felt worth sharing.

Classic self-aware screen name. At least this tantrum-throwing individual could admit his or her faults.

Either someone spelled princess wrong, or this is the little boy playing with Barbies of screen names, and I support breaking gender roles.

It’s truly a relief to know that Eskimos and rappers don’t have to be mutually exclusive things.

This person is currently a Pitbull fan.

Screen name’s translation for those incapable of speaking 2003: “Easy to see you are a cutie.” A screen name that gives you a compliment despite no evidence to backup such claims? I can dig that.

Translation: Fly cutie with the booty. Probably went with this name because sMaRtStUdEnTwDaBoOkS was taken.

Has for sure made twerk Vine videos, plural.

You don’t have to wonder if it is in fact Gina you’re intracting with. Just log into AIM and she will greet you immediately. “Dats me,” Gina’s screen name will say.

Perfect screen name for when you think your personality sparkles bright like glitter, but also you’re too cool to use vowels.

Does the offer still stand? Because I kind of do.

More like arrogantlips620. The greats don’t have to tell everyone how great they are, except for Kanye.

WhY wAs tHiS sUcH a nOrMaL tHiNg tO dO? wHy?

Assuming the 14 is in reference to his age, was lostman just a teen, feeling lost in life, like a lonely soul adrift a sea of uncertainty? That’s deep. I hope right now, somewhere there’s a foundman25-ish.

Who says building your personal brand on social media wasn’t a thing in the early 2000s? This person is definitely an active member of weird Twitter, who has over 1,000 followers.

Coming to a DM inbox near you, ladies.

What an innovator, craftily using numbers as letters to spell words, proving that or1g1nal1ty isn’t just your screen name, it’s a lifestyle.

This guy didn’t vote for Obama. I’m scared of heights, but I’m willing to jump to that conclusion.

Upon discovering that the name “sarah” was taken, sasasarahhhh clearly got imaginative.

A real, tru flipper, for me? Fantastic! It’s so hard to find honest flippers these days.

Not sure if xodashorty69ox and daballa331 are dating, but if they had dababy it would be dashalla400.

It’s intense because this self-proclaimed yungbuck isn’t insufficiently wild or just wild enough, he’s 2wild. I don’t know about you, but when I see a yungbuck who is 2wild, I clench my purse and walk on the other side of the street.