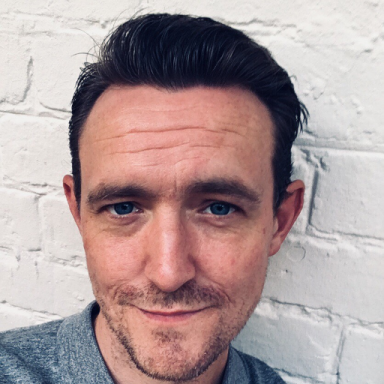 Like the Terminator, a breakup is an unrelenting beast.

But unlike that murderous cyborg from the future, a breakup hasn’t just got one target. It’s aim is indiscriminate, and it has no problem wreaking havoc on your self-esteem, sanity, personal hygiene, and anything else it can get its mean, grasping hands on.

In short, it’s grim. And then a bit more grim, with a tiny sprinkle of extra grim on top.

I know—I’ve endured enough heartache. That’s not because I’m a Lothario who women can’t stop throwing themselves at. I’ve just lived a little, put myself out there, taken some risks, and been lucky enough to have found a few people who liked me and wanted to snuggle on the sofa next to me.

However, all of my previous relationships had one thing in common: They ended.

And, as I don’t do well with endings of any kind, the aftermaths were universally awful—that emotional Terminator always pitches up and, like an unwanted house-guest you’re afraid of, hangs around indefinitely.

But one breakup, more than any other, floored me. Moving on seemed impossible. I got well and truly stuck. Inert. Trapped.

In despair, I did what men never did: I talked about it. I’m fairly certain my friend regrets ever making the offer to listen; it must have been excruciating for her. However, for my part, I’m so glad she did, because without her, I’m sure I’d still be stuck in heartbreak purgatory now.

After listening to my story of woe, she dispensed a dose of tough love. And it was her words that jolted me out of my emotional lethargy. Her comments were honest yet compassionate. But, it wasn’t so much what she said as the effect her words had on me. They made me realize why I’d become stuck, and it was all because of what I was telling myself.

Consciously, I knew the relationship had no mileage; objectively, I knew it hadn’t made me happy. Yet that wasn’t what my subconscious was mumbling on about; it was telling me the exact opposite. It was whispering that I’d lost my soulmate, that I’d never find anyone like her again, that I’d now be single forever.

What ultimately helped me was, with the help of my friend, directly challenging those three statements. And when I did, I saw them as the nonsense they all were.

It felt that way. Boy, did it feel that way. But, dear Christopher (I told myself), you’re missing a rather important point: You broke up. You’re not still together. If it had been written in the stars, if destiny had preordained you to remain together, you would have. You would’ve found a way through and not finished with each other via text message. You would have endured. You two didn’t.

I have to be honest, it made my argument for her being my soulmate sound a bit hollow. I know love is often illogical, but I couldn’t deny the Spock-like logic of all that.

Right, Christopher; this one’s just simply daft. No, you won’t. Unless you plan on dating a clone of her (and you don’t have the technological expertise to build a replica—you’re a drama graduate who can’t even work your toaster), you will obviously never meet anyone exactly like her because she is her—a thoroughly unique individual, just as you are. That’s kind of how it works. Humans are different; they’re not shoes. Different comes with the territory. Behave.

Again, it made perfect sense. But the more I considered this point, the more ‘different‘ actually began to look exciting. None of my previous partners shared many characteristics; if I have a ‘type‘, you wouldn’t know it by looking at any of them. But that was amazing. Thanks to all them, I’d been introduced to The West Wing and the joys of burlesque and had been to places as diverse as Crewe, Rome, and Bangkok. And my world was infinitely richer for having Jed Bartlett and all those other experiences in it (well, I could have quite happily missed out on Crewe).

What else could I experience? What other ‘different‘ things awaited me? Yes—different was good!

That only left one to go…

Firstly, you’re heartbroken and in pain; that’s largely your nonexistent self-esteem talking. Right now, the prospect of putting yourself out there is terrifying. But that’s only because you’re not emotionally strong enough at this moment. Don’t ignore that hurt, and don’t try to bury it. But also, remember those feelings will pass.

Secondly, if that’s what you choose, then that’s what you choose. However, although you can’t guarantee meeting someone special, there’s also a heck of a lot you can do to give fate a helping hand. You’d met your last two partners online; why not a third? Plus, you live in a vibrant, cosmopolitan, world-renown city; there’s thousands of single women in Liverpool. If you want to meet one, nothing is stopping you from getting out there and trying.

Thirdly, so what if you did? I mean, really, so what if you remained single? Would that really be the end of the world? Yes, it would mean adjusting what you believe personal success and happiness to mean, one of the central planks being ‘to be in a relationship.’ But, that’s an idea that has been put there by both society, and your own upbringing; maybe it’s time to reassess those criteria, and maybe being single and being fulfilled in other ways is one of those adjustments.

This last one scared me. Really scared me. But I was right; so much of what I’d deemed to be ‘success‘ were aspects I had never consciously decided upon. Maybe it was time to consciously consider those, and maybe once I had, having a partner wouldn’t be as important to me as it was to others.

However, I was right on the other fronts as well: My current fear of trying again was borne out of being heartbroken, and once that had healed, there really was nothing stopping me from trying again. Whatever path I chose to take, it was mine to choose.

Not to sound cocky, but I was good at this stuff.

Despite the stern talking to and the cold dose of logic, I did still hark back to these three points over the coming weeks. They never really, fully went away. But they did grow quieter with every passing day. Now, they’re an almost silent whisper. At night, once Liverpool goes to bed, I can hear them if I listen hard enough.

But I choose not to.

I’m not yet ready to try again—the last Terminator really did do a fair bit of damage, and I’m still repairing some of it’s handiwork. However, I’m growing closer to being ready. One day soon, I will be. I’ll put myself back out there.

And if that doesn’t work? Well, at the very least, I know what to say the next time that Terminator comes to stay.