Back in the dark ages before Amazon Prime and YouTube if you wanted to watch a movie you had to obtain a physical copy of that film on videotape. You did this by going to a retail store or a movie rental store and hoping they had the movie in question in stock. If you were tech savvy and really wanted to watch a particular movie you could order it online and in a few weeks you’d be able to watch the movie in your own home.

If the movie you wanted to watch was a Disney movie, the process was even more complicated. Disney had a special practice of creating artificial scarcity by releasing their films for a limited time and then making the films unavailable for purchase, placing them in the “Disney Vault“. Films would then rerelease to theaters and home video every ten years. This drew increased attention and sales to Disney movies during their limited runs. This practice ended somewhat in 2019 when Disney purchased 21st Century Fox and the Disney+ streaming platform was created.

In 1999, an animated Disney movie called The Rescuers from 1977 was up for rerelease on VHS. The movie is about an international society of mice who help kidnapping victims called the Rescue Aid Society. Two members, Bernard (voiced by Bob Newhart!) and Miss Bianca (voiced by Eva Gabor!), agree to help a young orphan named Penny who is being held hostage on a river boat in Louisiana.

Kids loved this story of mice rescuers so much it became Disney’s first animated movie to get a sequel. The Rescuers Down Under follows Bernard and Miss Bianca, now elite field agents at the Rescue Aid Society, as they venture to the Australian Outback to rescue a kidnapped boy named Cody. The movie was released in 1990 and went into the Disney vault in 1993.

In 1999 it was time to think about rereleasing The Rescuers and The Rescuers Down Under. Three days after this second release, on January 8, 1999 Disney announced it was recalling all 3.4 million copies of the VHS. The reason given was an “objectionable image” in the background of the movie.

Of course, people scrambled to figure out exactly what the “objectionable image” was and the recalled VHS quickly became a collector’s item.

It turns out, an image of a nude woman had been inserted into two nonconsecutive frames in the movie in the scene where Bernard and Miss Bianca are flying through New York City and many buildings and windows appear in the background. The images of the nude woman would not be visible to anyone who isn’t seeking them out as they only appear in two frames and the film runs 24 frames per second. There are 110,000 frames total in the movie. Still, as a company that markets primarily to families and children, Disney made the decision to recall the tape. 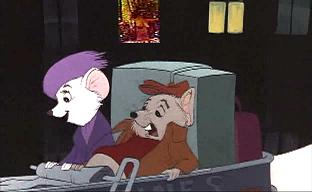 Here is the section of the movie where the images are placed slowed down so they are visible:

Disney claims the image of the nude woman was not created by their animators but was inserted into the movie post-production by a non-Disney vendor. They may have been present in the movie since the original theatrical release in 1977! However the version of The Rescuers that was released to VHS in 1994 was a different print which did not contain the images at all.

The vast majority of the public had no idea there were nude images hidden in The Rescuers until Disney announced they were recalling the movie and why. The company had received zero complaints about the images. It could be that this was just another strategy Disney used to create artificial scarcity. As soon as the recall was announced, copies of the VHS became more valuable and sought after. Perhaps Disney released this version of The Rescuers with a nuclear option. If they decided to do nothing, it is unlikely anyone would ever notice the images of the nude woman (remember, this is before the internet of today existed). However, if sales of the VHS were slow, Disney could announce the recall to invigorate interest in the movie.

This story could only take place in the 90s as it’s unlikely that we’ll hear rumors of hidden scenes in movies anymore. Now you can immediately stream, pause and screenshot pretty much every movie ever made and then easily share that screenshot with everyone you know. Once one person notices something, everyone else knows it too.

It will be interesting to see what Disney’s strategy for creating scarcity will look like when it is applied to a generation that grows up having instant access to everything.