I’ve seen a lot of insane true crime stories over my years of being a true crime fan. One of the things that always creeps me out the most is when a crime is just super random. When a killer chooses his prey randomly or changes his mind quickly it’s unsettling because it causes us to think about how easily we could be victims of a predator. It emphasizes how little control we have over keeping ourselves safe.

One of the creepiest completely random attempted murders happened four years ago in London and it was caught on tape.

The incident happened on the Putney Bridge in London. The bridge has three southbound lanes and one northbound. It is a very busy bridge and a popular place for pedestrian traffic as well. A fun fact about the bridge is that in 1953, English serial killer and alleged necrophile John Christie was arrested there.

On May 5, 2017 a man jogging across the bridge passed by a woman walking the opposite way. As he passed by her, he seems to make a sudden decision to push her into the path of an oncoming bus. The bus was so close that the fact that the bus driver was able to swerve out of the way is a miracle. When the jogger pushed the woman, it looks like certain death.

The interaction was caught on CCTV:

The woman, an unidentified 33-year-old Londoner escaped the incident with only minor injuries. She says 15 minutes later the jogger returned, running the other way on the bridge. The woman attempted to get his attention but he did not acknowledge her.

Unfortunately, the jogger’s clothing and appearance is generic. He’s a white male in his mid 30’s with brown eyes and short brown hair wearing a grey t-shirt and gym shorts. There are so many men that fit this description in London. Even after the CCTV footage went viral on YouTube, neither the public nor the police could identify the man. 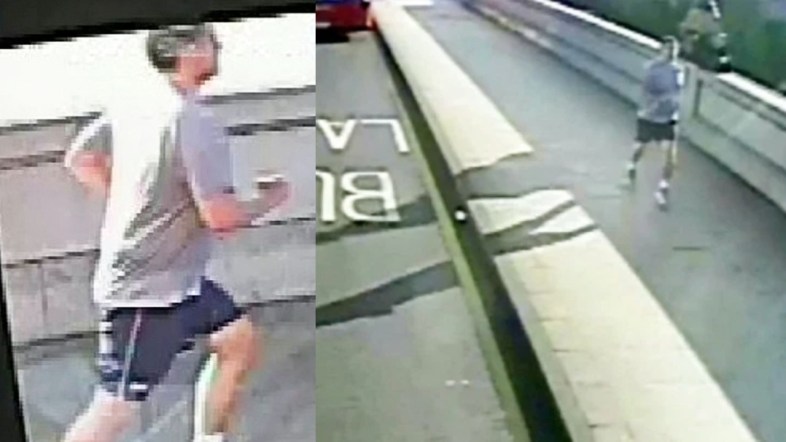 A body language expert says the jogger could have been angry that he perceived the woman to be in his space. If you look at the video, this clearly wasn’t the case, but that doesn’t mean this isn’t how the jogger perceived it. The expert says that anger over feeling like a woman was invading his territory may have led him to suddenly push her into the path of the bus. This tracks with other experts who say men who view women as needing to be “corrected” by men are the men who are most likely to be physically violent with women. The body language expert says the public is probably looking for an “entitled perfectionist”.

Police looked at over 50 suspects and made 3 arrests, but never identified the jogger and closed the case in 2018. It was later reopened and then officially closed again. The identity of the Putney Bridge jogger is still unknown.

If you love true crime and regularly read my posts, I want to give a shout out to the place I find a lot of the interesting cold cases I write about: the r/unresolvedmysteries sub. There are tons of really well-written posts about thousands of cases. For instance, here’s where I first read about the Putney Bridge jogger. It’s where I go immediately to read discussion when there is a breaking news true crime event! (Also, if you are a regular reader, sign up for my creepy newsletter!)