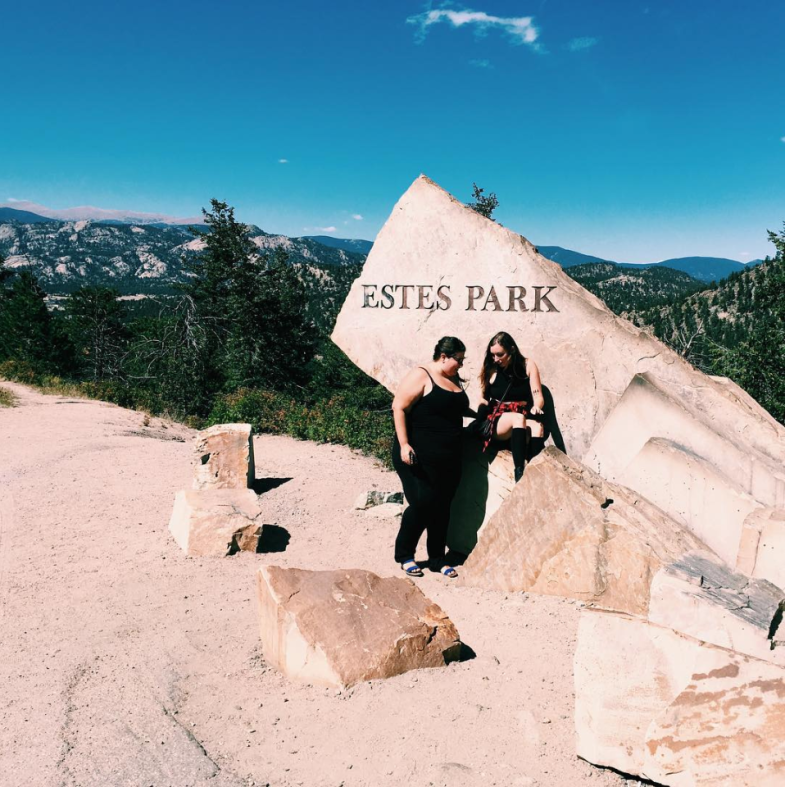 We were nervous to drive.

It was just us girls an a small Chevy sedan. It’s funny the way we were both so strong, the way we made it to our 30s by slowly, slowly, painstakingly carving out our own paths. We were sturdy and confident by this point but we were still just girls and something like driving in the mountains was intimidating because we were never taught it was something we should feel confident about or rush forward toward and we just hadn’t lived enough years to get around to mastering everything.

We drove up from Colorado Springs and through Denver. We didn’t stop until we got to Boulder where we went to a bookstore and then a bar. I thought about Stephen and Tabitha King living down in this valley for a year before making the trek up the mountains to the Stanley Hotel in Estes Park where Stephen famously had a sleepless night that birthed his novel The Shining.

We were following in King’s footsteps, working our way up into the Rockies. I, wooed by King at a young age, was here to stay in his room 217 and see the way the world looked from its windows. My friend Koty was along because I promised beautiful views and maybe an errant ghost or two. We were both writers, it was a pilgrimage of sorts. A way to walk in the footsteps of someone who had done what we wanted to do and see how it felt.

The Stanley Hotel had once been a place for jet setters. It’s placed majestically on a hill near the top of Estes Park, Colorado, a small tourist town home to the entrance of Rocky Mountain National Park. It was a good place to go and breathe some strange, mountain air and play dress up.

It was a good time for us both. What a relief. Things were okay. We weren’t lying awake at night worrying. We checked in and ate lunch outside in the garden in from of a waterfall. We were starving and ordered half a dozen plates between the two of us, partially because of the hunger and partially just because we wanted to be extravagant together. The waiter laughed and blamed the elevation. We had burrata and chicken wings and meatballs and special The Shining themed IPAs. We felt like rich single women who got to do whatever they wanted in life.

After lunch we went to our room and took turns taking pictures working at “Stephen King’s desk”. An entertainer called and invited us to his show that night because he heard we were writers and I was going to write something about the hotel. He was a mentalist who did a spooky/funny/thrilling “seance” to show off his skills. I’d never been to a magic show and the whole thing was a lot more intriguing than corny like I’d imagined it would be. The next day the man invited us to lunch and told us about his history as a scammer and how he does his show based on cold reading, which he said was a kind of magic itself even though “cold reading” was supposed to be used to explain away any magic in his show. How do you look at someone as they pull a card from a deck and determine the number and suit by way of analyzing their reactions, gestures, and gait? Even if it is science it’s magic to be able to do that.

Later that night we went on a ghost tour that the hotel offered and learned about the hotels hey day when John Phillips Sousa would come up to play piano and Harry Houdini performed in the concert hall and the unsinkable Molly Brown would bring her friends up from Denver. I took a selfie of myself in a mirror and a light appeared in the image. It could maybe be a little girl in an old fashioned dress if you squinted. Maybe. It was the closest we came to ghosts. We got more drinks in the whiskey bar and fell asleep in bed together. I woke in the middle of the night to a text from an old flame saying he missed me. I opened the French windows in the morning and we sipped coffee and drank the mountain breeze.

It was like he knew the way the mountains made me think every earthy thing was something to marvel at, including myself. I was more beautiful there and he could sense it even though he couldn’t see me. I was someone worth missing.

When it was time to leave I remember one bend in the road as we descended where I had to pull over because I couldn’t believe the road in front of us really looked like that; so mythic and serene, like a painting. We took pictures to remember the moment, and drove on. We went home to separate states and carried on the way you do with friends from afar.

I just thought the trip was a gift. It was something beautiful we made for ourselves. No one told us to go or gave us money or even told us how to be careful. We were women without all those things women are supposed to have — husbands and kids and mortgages — but we had writing and we had a belief that someplace like the Rockies is holy and that artists like King matter. We wanted to be there and breathe it in and to leave having clawed something so grand out for ourselves. We cobbled these lives together and sometimes they even looked like we hoped they would.