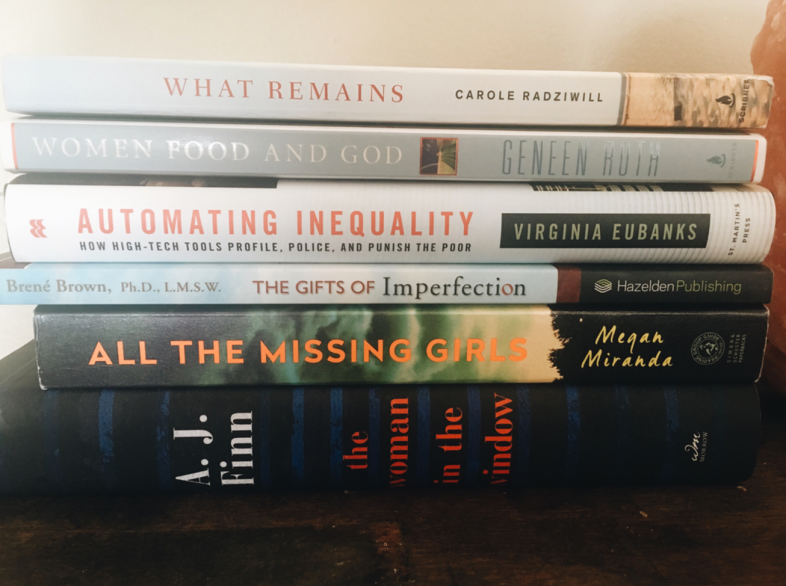 What Remains by Carole Radziwill 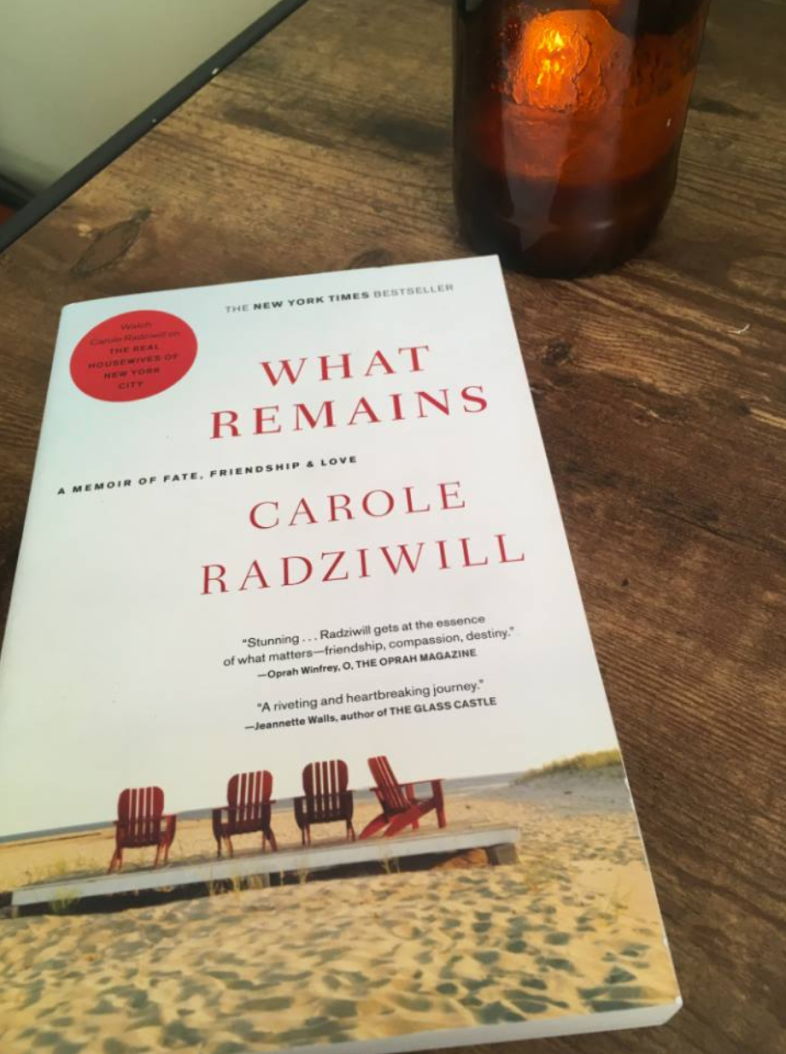 I LOVED this book. It’s so much more well written than I expected, even though I knew it was a huge NYT bestseller when it came out over a decade ago. I know and like Carole from Real Housewives of New York City and I knew some of her background with ABC News and the Kennedys, but this was a lot more interesting and beautiful than I expected. Just a lot of really deep, empathetic, enjoyable writing aside from a small, annoying chapter where she’s too hard on bystanders to public tragedy (she calls them “tragedy whores” which feels dated and gauche in 2018).

After reading I had to go back and watch all the drama about Aviva Drescher accusing her of having a ghostwriter and it was even more insane!!!

Two quotes I really loved from this book that will give you an idea of how it feels to read:

“Once it was the four of us, with all our dreams and plans, and then suddenly there was nothing.”

“Ultimately what remains is a story. In the end, it’s the only thing any of us really owns.”

The Gifts of Imperfection by Brené Brown 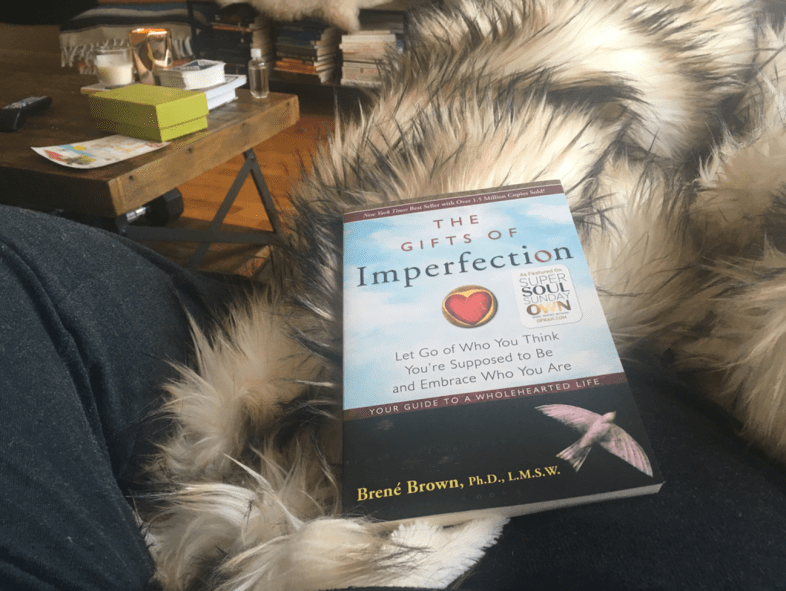 I expected to like this book a lot more than I did. I’ve been hearing about Brené Brown for a long time, and the concept of this book in particular seemed like something I’d really enjoy. It was okay. I think I took some good things from it, but a more accurate title for the book would have been “10 Rules For Whole-Hearted Living” which is a fine topic, but a little different than what was advertised. I’m going to read another Brené Brown in March, I think I still could be a fan and maybe this little book just isn’t the best introduction.

One thing I really enjoyed about this book is the way she calls perfectionism out. I think a lot of people talk about being perfectionists in kind of a cutesy manic pixie dream girl kind of way where it’s almost an aspirational flaw but Brown makes it clear it’s not that some people are perfectionists and other people aren’t perfectionists — perfectionism is a character flaw that we all fall into sometimes. Perfectionism is toxic, something to fight against rather than embrace:

“Perfectionism is not about healthy achievement and growth. Perfectionism is the belief that if we live perfect, look perfect, and act perfect, we can minimize or avoid the pain of blame, judgement, and shame. It’s a shield.”

The Woman in the Window by AJ Finn 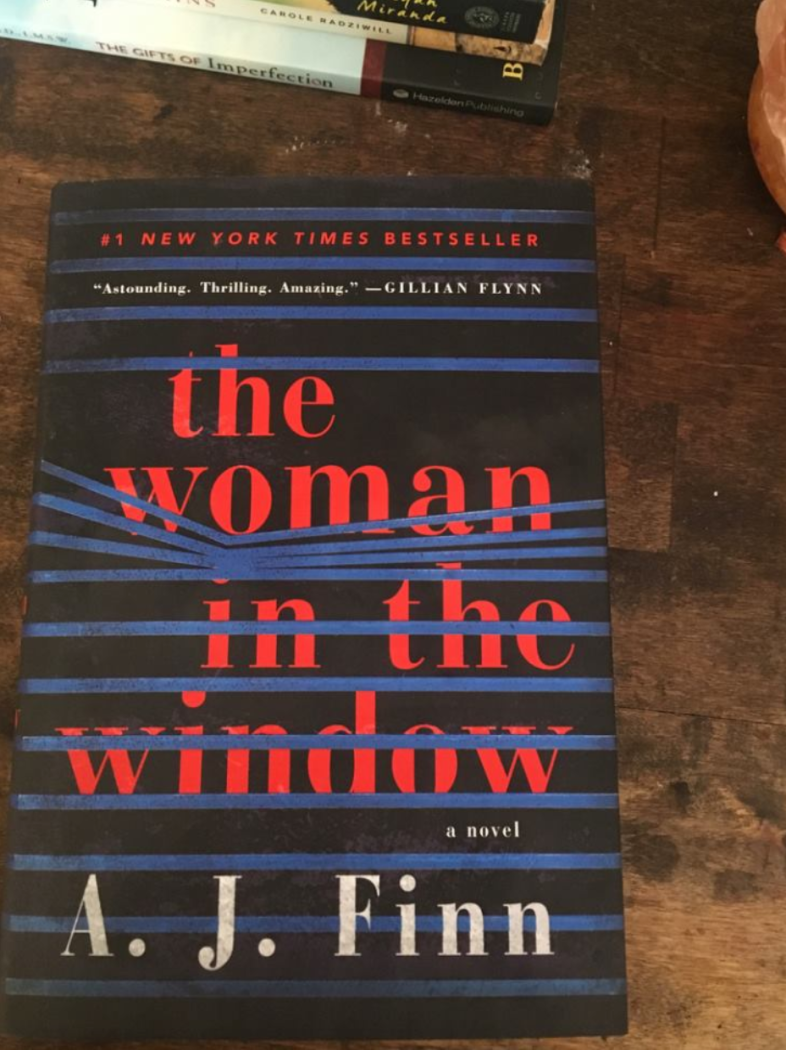 This book was SO good. I LOVED the narrator (a wine obsessed, relatably crazy woman experiencing agoraphobia) and the plot totally sucked me in. I couldn’t stand putting this one down. 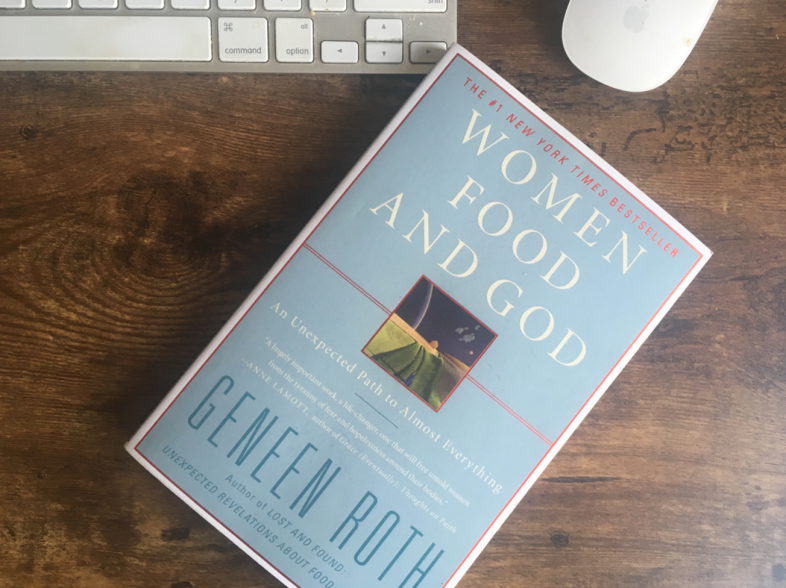 This is the second Geneen Roth book I’ve read despite not overly enjoying the first one. I think the concepts she writes about are right, she just has a style I can’t sink into. I want her to go deeper, or joke less. But I think there are a lot of people who wish most authors would be more entertaining and funny, so I think she just maybe isn’t for me.

Also, I don’t think she really got into the “god” part at all, and I was really excited to read a theological component of eating disorder stuff. Her premise is basically “let go and forgive yourself and you won’t have food/god/self issues anymore.”

This book was highly quotable, though. She speaks in quips, so it’s nice to feel like you can easily go back to what you learned, because she’s so good at restating it in interesting ways. Here are two quotes I really did love from the book:

“Food is good and comfort is good. Except that when you are not hungry and want comfort, food is only a temporary palliative; why not address the discomfort directly?”

“When the suffering is fully allowed, it dissolves.”

All the Missing Girls by Megan Miranda 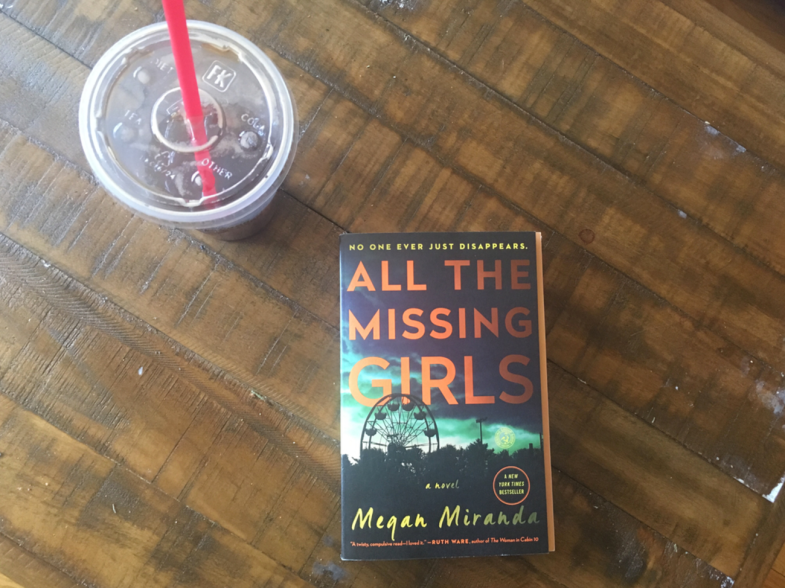 This was a very enjoyable binge read of a mystery novel. I highly recommend for your next plane read, or just a nice way to spend a weekend. The writing is great, too, especially if you’re in the mood to revisit high school/your first love/your hometown:

“He says my name and I’m seventeen.”

House of Hilton by Jerry Oppenheimer

This book was a non-stop thrill ride of gossip. It’s a bit dated because most of the gossip assumes I want to know about Paris Hilton when I was really reading it because I wanted to know more about Kim and Kyle Richards. It got boring at some points because there’s only so much I can care about tabloid gossip from 50 years ago, even if the players involved are super famous like Elizabeth Taylor and Zsa Zsa Gabor, but if you watch Real Housewives of Beverly Hills and need to understand what made Kim Richards Kim Richards, this book will explain EVERYTHING.

Here is the kind of extremely high-brow conversation I am able to hold after reading this book: 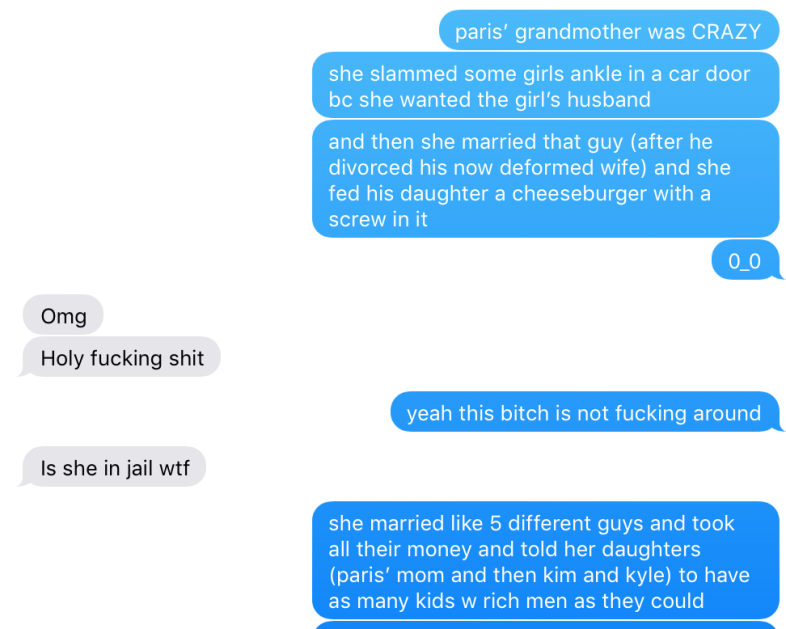 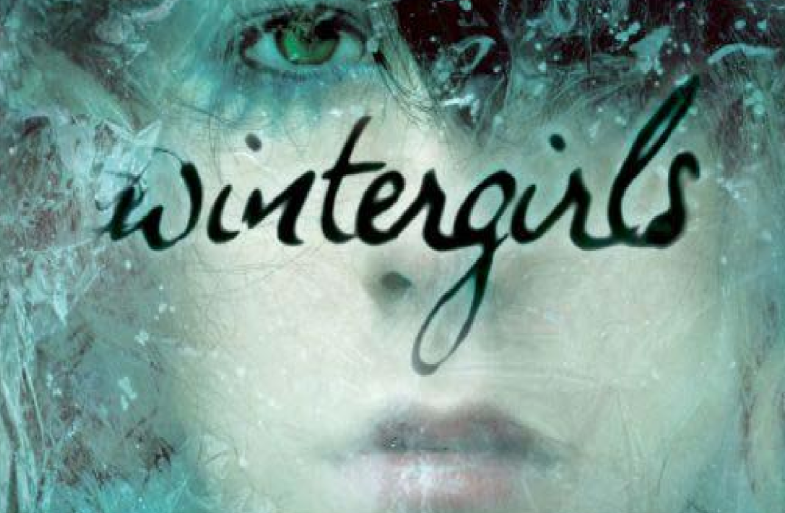 This is a good YA book. It’s not going to change your life but it was enjoyable and dark. The narrator went off on one tangent that I wanted to stand up and clap for, about how people have basically no tolerance for people working on their mental health to speak from any perspective other than “it’s in the past! I’m healed!” This is especially true of people talking about their eating disorders (the topic of the book) where people’s diaries and conversations are literally deleted from websites if they aren’t written in a Pollyanna “I’m enjoying every single second of recovery!!!!!!!!” voice:

“He couldn’t stand me being sick. Nobody can. They only want to hear that you’re healing, you’re in recovery, taking it one day at a time. If you’re locked into sick, you should stop wasting their time and just get dead.” 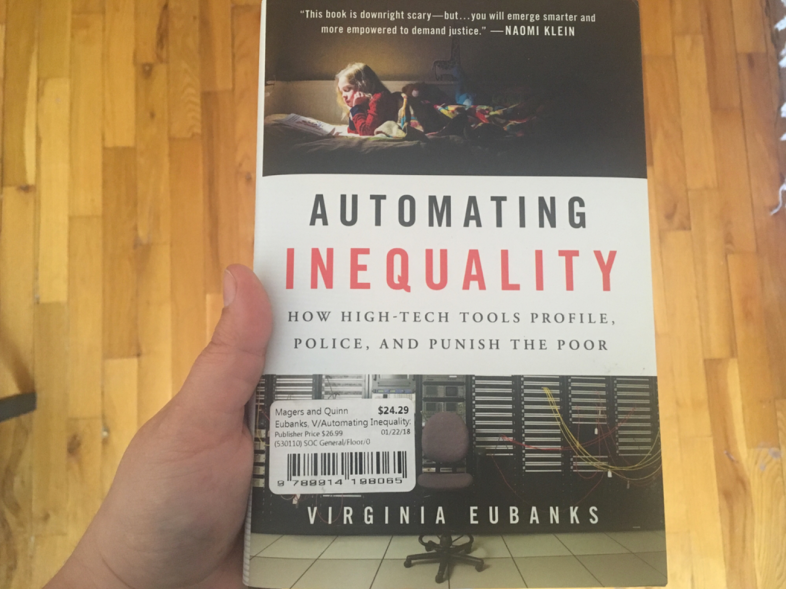 I thought I would learn something from this book that would help me shift or deepen my perspective (I love technology) and I didn’t, which really frustrated me. I may have had a bad attitude when I picked it up (I thought the writing was good when I was browsing in the bookstore) because I was like “I am taking time out of my day for you to convince me to care about something” and I wanted the writer to accomplish that goal (which may or may not have been something she cared about to begin with). Instead I just read about stuff that seems like normal, inevitable growing pains of gigantic, ever-evolving systems that are necessary when you have a country of 323 million people.