Like most people, I first met Brianna Wiest over the internet. Her earnest writing about self-improvement connected with me as a person who was always trying to do better.

When we met in person I saw where it all came from. Only the kind of aggressive happiness that floats out of Brianna’s pores could produce such a prolific catalog of inspirational articles that… actually make you feel inspired. It’s no wonder she’s one of the most read (and well-liked) writers in Thought Catalog history. Her book, 101 Essays That Will Change The Way You Think, is also one of the publisher’s best-selling books.

Now Brianna’s debut poetry collection, Salt Water, is about to be released. I asked her some personal questions about how she got here, and we can expect from her new book.

What is your earliest writing memory?

I tried to “write books” in elementary school. Once, I wrote a four page story and typed it up and brought it to my 6th grade language arts teacher who told me that her son was also an aspiring writer and could line a wall with his rejection letters… I’m pretty sure that meant it wasn’t very good. It was based off of Laurie Halse Anderson’s ‘Fever,’ and the main character’s name was Genevieve. I always wrote in journals, and was always making up stories in my head. Most importantly though, I loved to read for fun.

What made you want to be a writer?

I was never disillusioned by the idea that being a writer was glamorous. What made me want to be a writer was just becoming a writer. I don’t think I wanted to do it as a profession before I started… mostly because I thought being a writer wouldn’t be a viable career option. But it turned out to be, and I discovered that I liked it and, over time, that other people liked having me write for them. It’s taught me the difference between liking the elevator speech and liking the daily work of something, and how important it is to build a life in which you do the latter.

You have thousands of essays on thought catalog, and a collection of essays out already, what made you want to do poetry?

I just wanted to try something new, and I was having fun doing it for myself. I didn’t think that I’d be able to do a lot of the writing I do now, so why not see if I could do something else I considered off limits? That was kind of my mindset at the time. I started sharing some poems and people responded well… that was encouraging. It was totally a passion project, and the fact that I didn’t (and don’t) want to pivot to make it the focal point of my career actually affected which publishers were interested in it. I’m happy it ended up where it did.

Describe your poetry style in 5 words.

Who are some of your favorite poets?

One of my best friends, Chrissy Stockton. Her work bridges the abstract and ordinary in a way that I think most poets could only dream of. I love C. Joybell C., specifically “A Mouthful of Forevers,” I have an Emily Dickinson poem written down somewhere, the one about dwelling in possibility, and I also love Mary Oliver. She has one about not believing she could be a writer without the natural world, and that for her, the “woods are the door to the temple.” That’s a favorite, too.

Where did the name of your book, Salt Water, come from?

It came from one of the poems, which is about how my mom used to put my legs in ocean water when I had cuts and scrapes, and she told me that salt water heals.

What’s a mistake you made early on in your writer career that you’d want other people to learn from?

Overthinking it! Ascribing too much meaning to your work. Waiting to “feel inspired” before you start writing. You have to relinquish the ego out of it, which is so hard when you’re just putting your thoughts and ideas out on the line everyday, but you are seriously hindering your creative potential if you don’t. Most of the time, people aren’t thinking about you as much as you imagine. Most of the time, your concerns about their judgments are your own projections. Once you feel a little more secure in what you do, other people’s voices won’t be so acute. You just have to get started and don’t stop.

How do you stay motivated through longer writing projects (like books!)?

Doing it piecemeal. Making sure that I know exactly what I want to say and exactly how I want to say it. Once I am crystal clear on what I’m doing, it’s effortless. However, if I am not clear on what the chapter is about or what the overall point of the book is, I will get stuck. I have learned that feeling “stuck” is usually a signal that I’m not in alignment yet, I’m not focused enough yet. I have to get there first.

I’m not sure that it’s any one site or book in particular, but just following people who always tweet and post new writing and links to other people’s work… basically, making sure my social feeds are giving me information that makes me think. People advocate for disconnecting from social media and I agree that mindless scrolling is a huge waste of time, but you can also use it to your advantage. Hunt around for people who make you think or feel something, and follow as many of them as you can.

What do you hope people take away from Salt Water?

I hope they like it! I hope it makes them feel understood, or at ease. I hope it helps them look at something in a way they hadn’t before. At the very least, I hope they enjoy it enough to keep it around, and flip through the pages every once in a while. What else can you hope for?

You can pre-order Salt Water here. 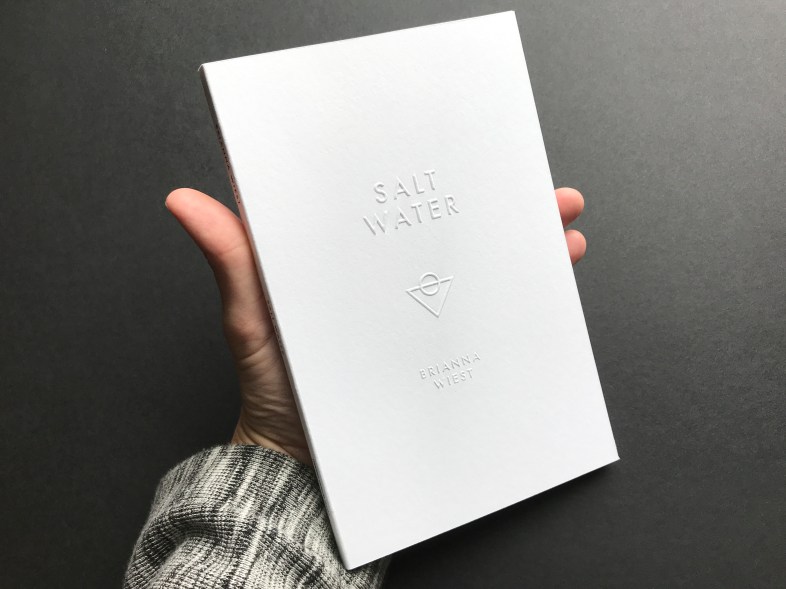 Women Writers Taught Me To Be Brave