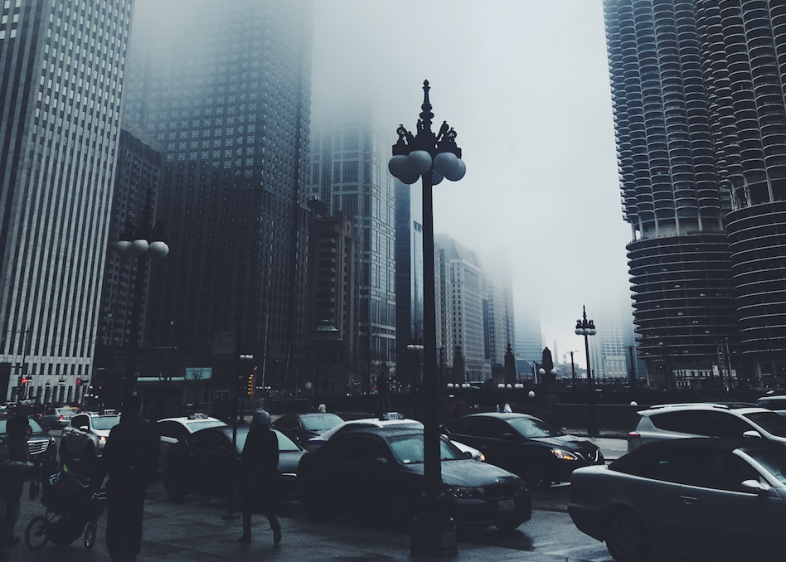 The first time I visit Chicago, a massive shining city only six hours from my home, I am already in college. My high school friend and I go to visit her brother over easter break. He is already out of college and in grad school for english literature. He wears thick glasses and has a job at a rare books store on printer’s row. I sleep on the floor of his living room and feel impossibly intimidated by his cool grad school friends who come over to drink mead.

The second time I go to Chicago it is to visit my friend’s brother again. We ride in the backseat of her mom’s minivan and eat snacks while she worries about construction. Something about a parent driving you somewhere transforms you into kid mode. My friend’s brother takes us to the Weiner’s Circle and I still think he’s really cool.

The third time I go to Chicago it’s with a friend I make in college. We go to her mother’s house for Thanksgiving and help her cook and listen to James Taylor on her record player. We go to the downtown library and sit silently for an entire day while my friend does research for her Greek professor’s upcoming book and I fumble through my homework. I feel very far away from the kind of person someone would ask to do research for their book.

The fourth time I go to Chicago we are already in Wisconsin before we slide into the Twitter dms of a writer we know from Tumblr and ask if we can sleep on his floor. He lives in Wrigleyville and everyone there hates us because they are trying to have a chill trivia night at their neighborhood bar and we are doing shots and screaming. We go home and dance to Justin Bieber and The Knife and then sit on the floor and make YouTube videos of us talking about Peter Singer. The guy whose house we stayed at later visits her in Minneapolis and we take him to a rave at an “art space” where they have cool djs and you can buy a solo cup of warm vodka for $5 and I think “this is the coolest anyone will ever think my life appears to be from the outside.”

The fifth time I go to Chicago it’s for AWP. I don’t buy a ticket to the conference because “no one goes to the conference”. I stay in a single hotel room downtown with three other friends. We lock the four macbooks we have between us in the hotel safe and go to parties where people stand on a chair and read poems off their iPhones and do drugs off each other in the bathroom. I think about how all I want in the entire world is to always be going to parties where people stand on a chairs and read things off their iPhones.

The sixth time I go to Chicago it is for the expressed purpose of my friend and I indulging our basic needs to sleep in hotel beds and go to a fancy dinner and then a rave in Chinatown, which all feel like they are stationary desires situated somewhere near the middle of my own personal Maslow’s Hierarchy of Needs. We skip the rave and watch Big Little Lies in bed which feels like more of a relief than a failure. I read one of the best books I’ve read in a long time and spend a lot of time on the hotel windowsill feeling content to just look at something beautiful for awhile.

There’s a sense in which these trips have become less about what other people expect from me, or what I feel like I need to be doing in order to be succeeding in life. I don’t know if I should expect that anxiety to return, if it’s cyclical, or if it’s just because Chicago is the wrong audience to make me feel like I’m not doing something right. What has shifted with time is my desire to be seen as cool enough has become a desire to be seen as normal enough. Outside of city limits like these, people want the decade of your 30’s to confirm that you are settled, chosen. Or maybe goalposts always move the moment you reach them. Maybe I am on a ship that is going to sink no matter what I do because in the effort I exert to plug one hole, I fail to notice that I am creating another.