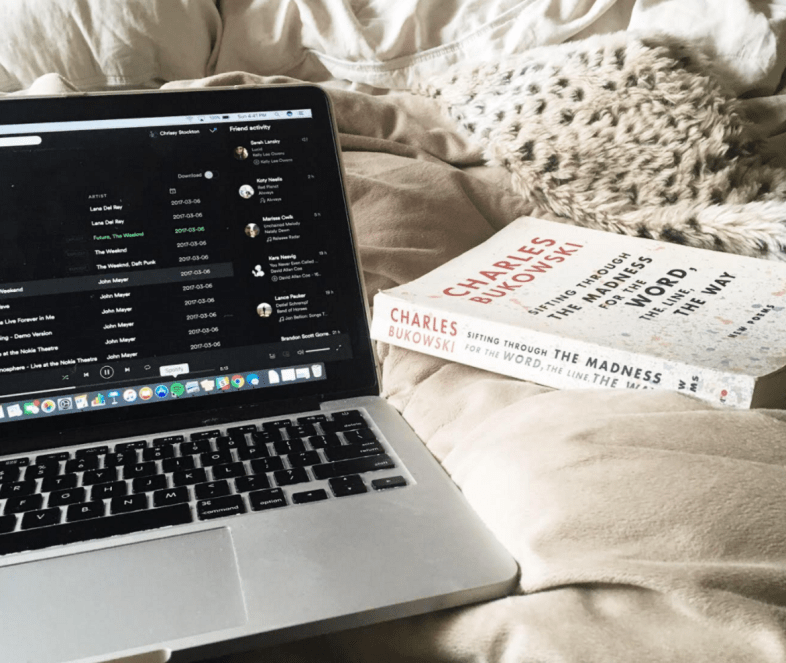 I am a person who cries easily. I cry when I hear a sad song or read a sad paragraph in a book. I cry about the concept of the Olympics and over something as minute as a friend saying in passing that his grandfather died last month. Yesterday I cried when I read a Bukowski poem out loud to myself in bed. In settings where it’s not appropriate to cry, only half the struggle is this initial feeling, that something emotional has happened and the language I naturally want to respond in is these visceral wet drops. The other half of the struggle is that I hate crying around people, and I get frustrated that I can’t stop myself.

My therapist asked me where all this frustration was coming from — has anyone ever directly told me that this natural response was a bad thing? And I immediately understood that it’s bad because it is a disappointment to the people I love who think that I should be stronger, if only because they don’t want to see me hurt. I’ve never thought about this guilt before. I’ve just thought “I’m so childish for just reacting to things, for not being able to filter things through my brain and realize that I don’t need to cry about it like a baby.”

Maybe there is such a thing as being too sensitive or too reactive and I am guilty of that. But I also think, that’s probably okay too. I don’t have to be good at everything and being bad at masking my feelings makes me good at a whole bunch of other stuff that requires your feelings to be accessible.

I dislike the idea that every woman is strong. It makes the word strong meaningless and it makes women like my mom (who is genuinely extremely strong) less special. My mom has held a lot of dangerous and unconventional nursing jobs and moved states with two kids and no husband and yelled at people who yell at her. And in some ways, her being strong has privileged me to be weak.

I interpret the things a lot of people do as barbaric. I can’t relate at all when people want to be violent or sustain feelings of anger, even when it’s for the intended purpose of justice. There’s a primal gene that’s missing from my DNA. But I know that I couldn’t exist in the wild like this. I know the only reason I can be the way I am is because there are people who have gotten their hands dirty for me, who have created a world in which it is okay for me to be the way I am.

I have realized that a lot of the problems I have in my life occur because I am a perfectionist. I spent a lot of time not knowing this because I don’t identify with the concept of being a perfectionist. I don’t look like one. I think I tend to be so forgiving of other people and not into universals or uptight-ness that I didn’t consider how much pressure I put on myself to do something completely or not at all.

There is a lake by my house and it’s about 5 miles to walk from my house, around the lake, and back home. It’s a little less than a mile to walk to where I have a view of the lake and then turn around. A lot of times I don’t go for a walk at all because I think I need to do the 5 mile walk every day. It didn’t even occur to me to be okay with doing a short walk until I read a book about all or nothing thinking. It’s total anathema to me to do something less than all the way, but guess what? When I walk the minimum of four blocks to see the view of the lake, I often feel like walking a bit more. I don’t have to do the whole loop, I just have to do something.

This idea is so radical I almost want to dismiss it.

I have a crush on a guy and I was telling him a story about a bear I was obsessed with when I was a kid and there was a moment when I could tell that he was looking at me with this expression of like “this person is really cute”. I keep thinking about it because I don’t understand how someone could look at me this way. I’m not saying a fairytale story there are a lot of other factors in this scenario but I am talking about a singular, pure moment. That happened and it was real and I can’t get myself to understand it. If this were a book I were reading I would screenshot the section to a writer friend and say ‘lol that’s not how things work sry.’

It feels like things are getting better, that this is spring in a genuine way — a time where things come back to life, again. When my mind wanders I am hoping that I look back on this time as the start of something, a period where things are good and everything is growing. I am worried, though, that it is another false start and that I am too old for false starts.