We’re up. It was only a semi-sleepless night :)

I kept rolling over expecting to wake up to a frightening full-blown apparition. There was randomly blood on both my pillows, but I’m 99.9% sure I just weirdly scratched myself during my sleep — I haven’t heard anything about malevolence here.

Thanks for following this night with me. I’ll have some more interviews up on the site later, leave suggestions for our next investigation in the comments.

We’re in bed watching The Shining. Will go live again tomorrow night with some final thoughts after I have the day to do some final interviews.

I will also update if we get any activity from Miss Wilson. She prefers married couples and single women and does not like single men. We’re not sure what she’s going to make of two sloppy, single 30-something women sharing her most watched over bed, but we’ll definitely report here immediately if anything happens.

At the theatrical seance I was invited to, I was supposed to invite a little girl who used to summer at the Stanley to play with me. This is her doll, it’s meant to look like her. 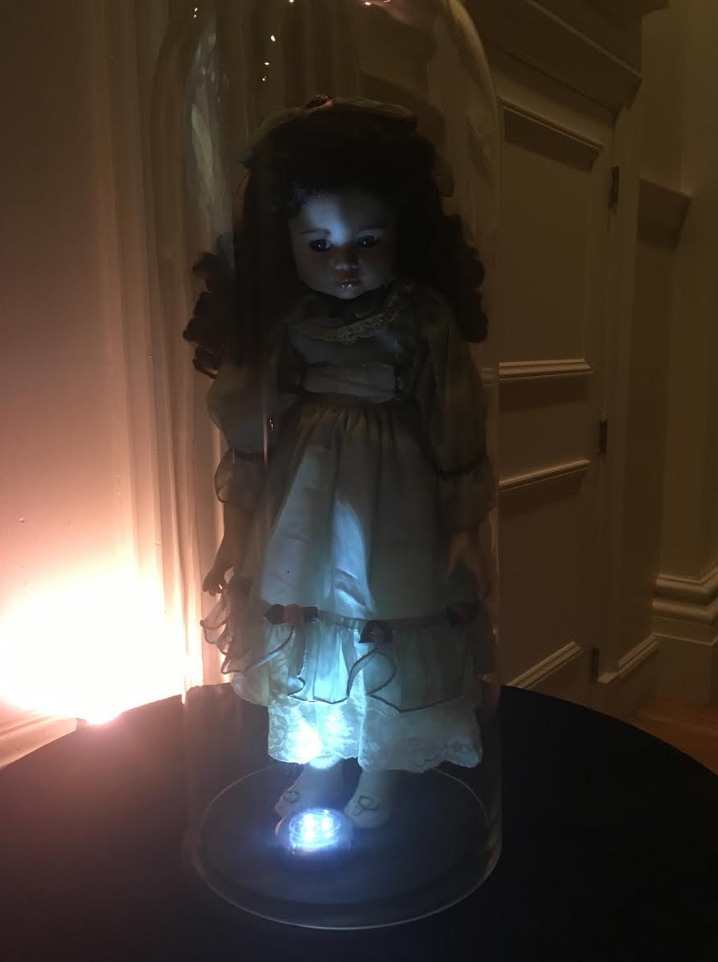 Don’t ask me why I got involved with dolls. 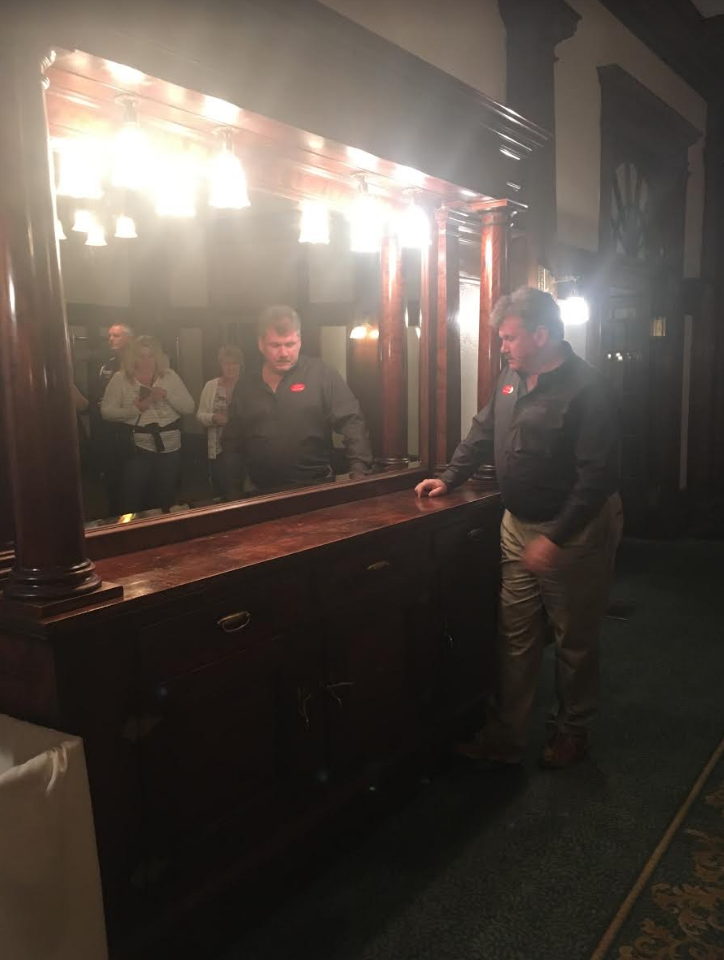 The original bar where Stephen King was served a drink by Lloyd Grady. Does that name ring a bell?

We’re totally freaking out over this photo. It was taken at a time when I made sure no one was behind me and everyone was off the to the side, letting people take photos by themselves, one by one. I also took the photo as part of a “burst” on my iPhone and you can see the mystery object fade in and out: 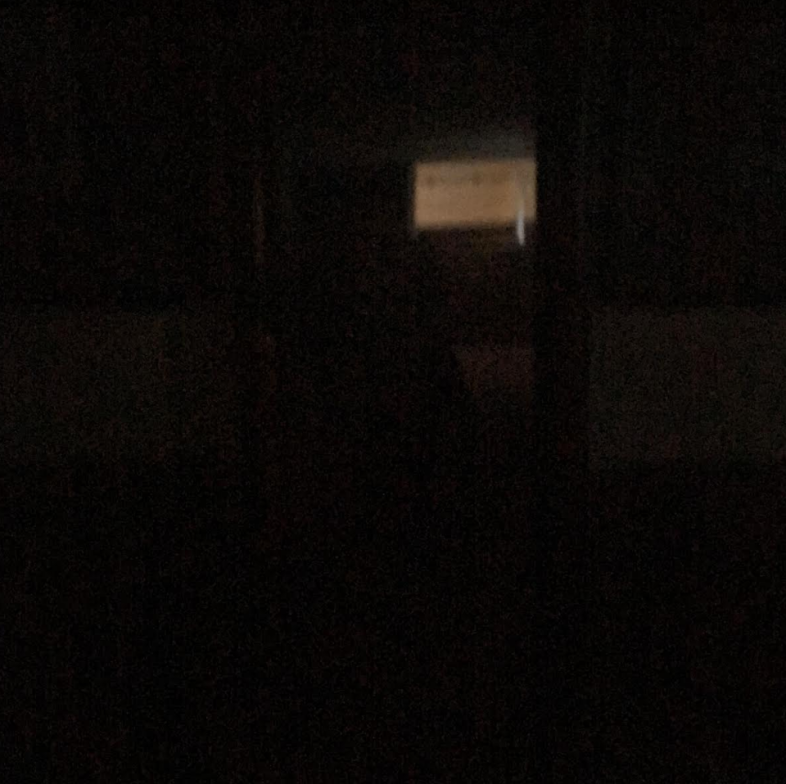 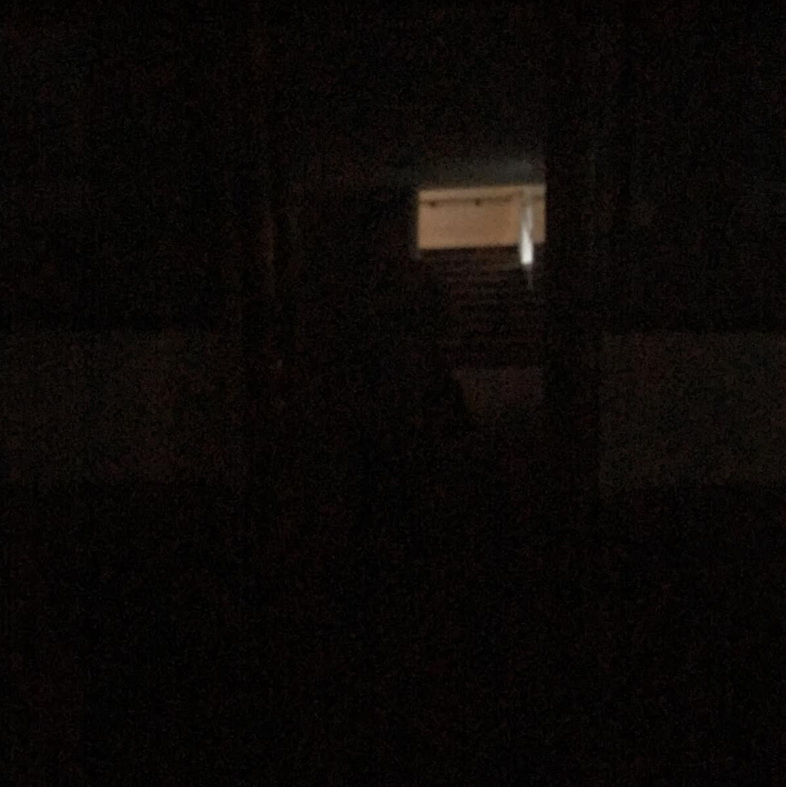 It seems like a figure that comes into focus?

We’re going over the pictures I took on the tour. In one place (the concert hall basement) there’s been especially convincing photos taken in a mirror, so I stopped to take a picture of myself in the mirror. I checked carefully that there was no one behind me while taking it, and it definitely looks like you can see the faint outline of someone behind me: 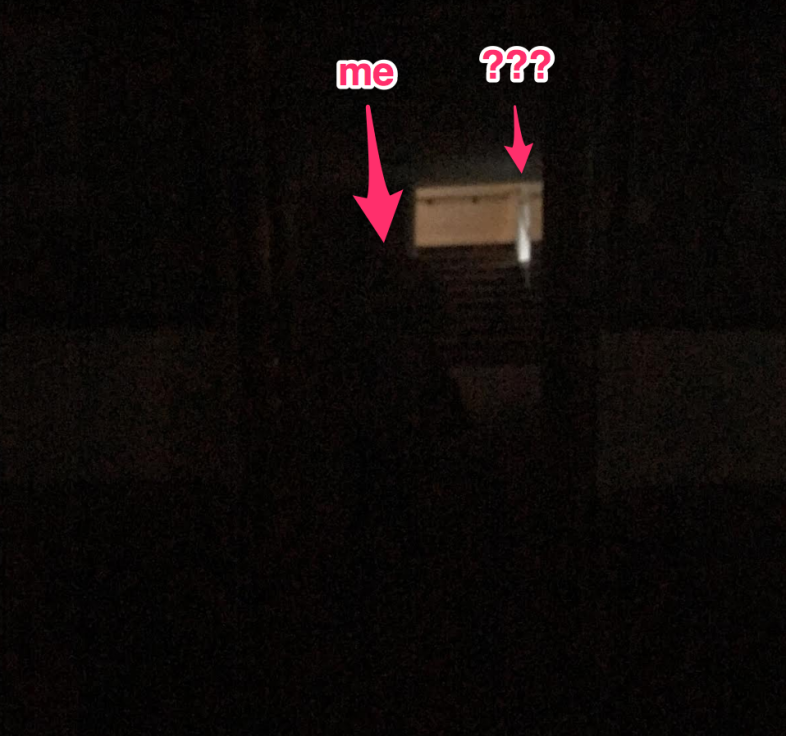 Does anyone remember this from the book/miniseries? ^__^ 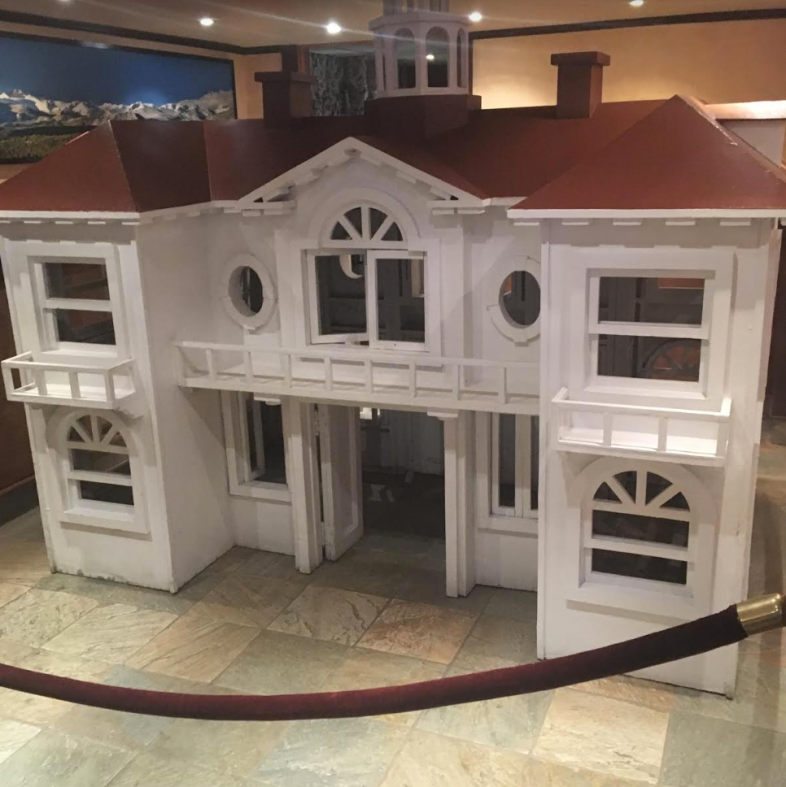 Reader Jenny wanted me to ask what the spirits need in order to move on. I pulled this card: 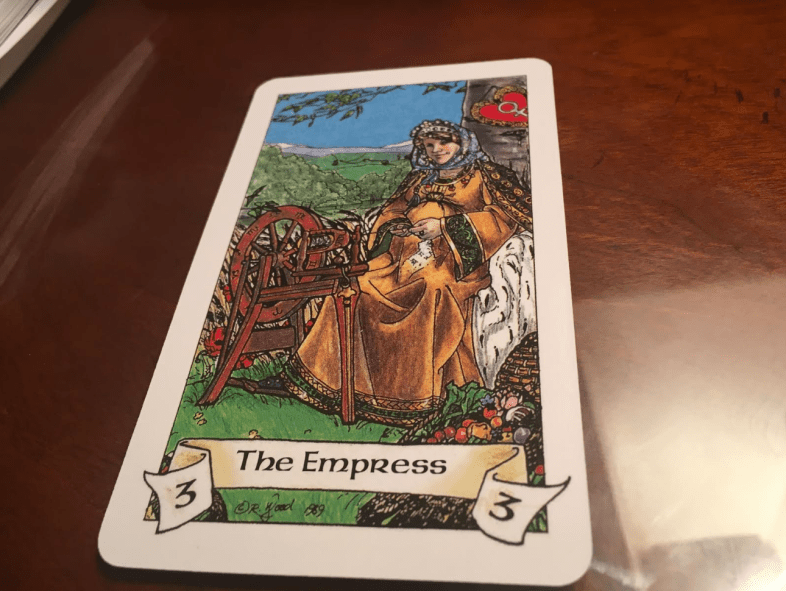 The Hierophant usually conveys a need to follow a traditional path. Maybe all the “go towards the white light” stuff we hear is true?

From what I’ve heard, there aren’t many people who have had “bad” experiences here other than the fact that paranormal experiences can be scary! Most ghosts here return because the hotel represents some of their happiest memories.

Reader Dalton wanted me to ask Miss Wilson if she’s happy. Since we’ve been having better luck with the cards, I asked them and got The Empress card. It’s a happy card of a feminine, nurturing woman who is in control and full of energy. I would say yes! 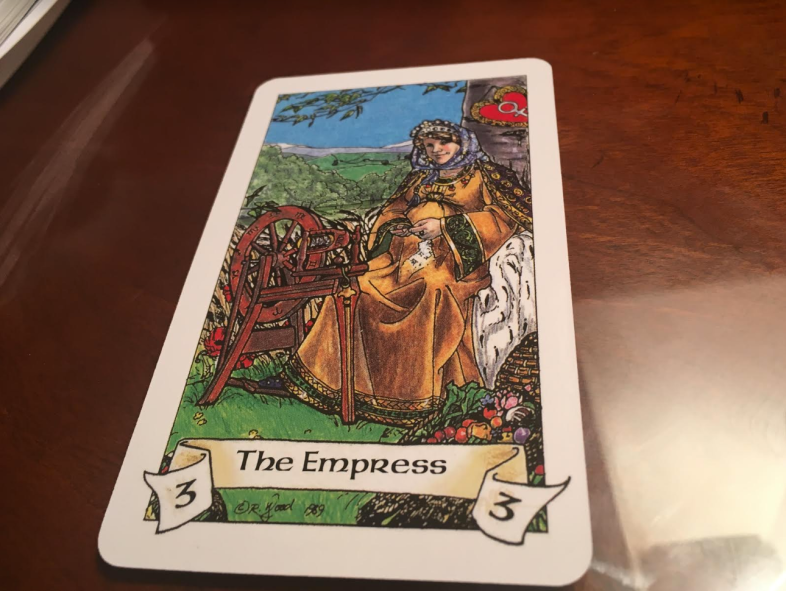 Apparently Miss Wilson loves to help women pick out their clothes. I left two options for tomorrow hanging in the closet, hoping in the morning one of them is on the floor and one is left hanging. 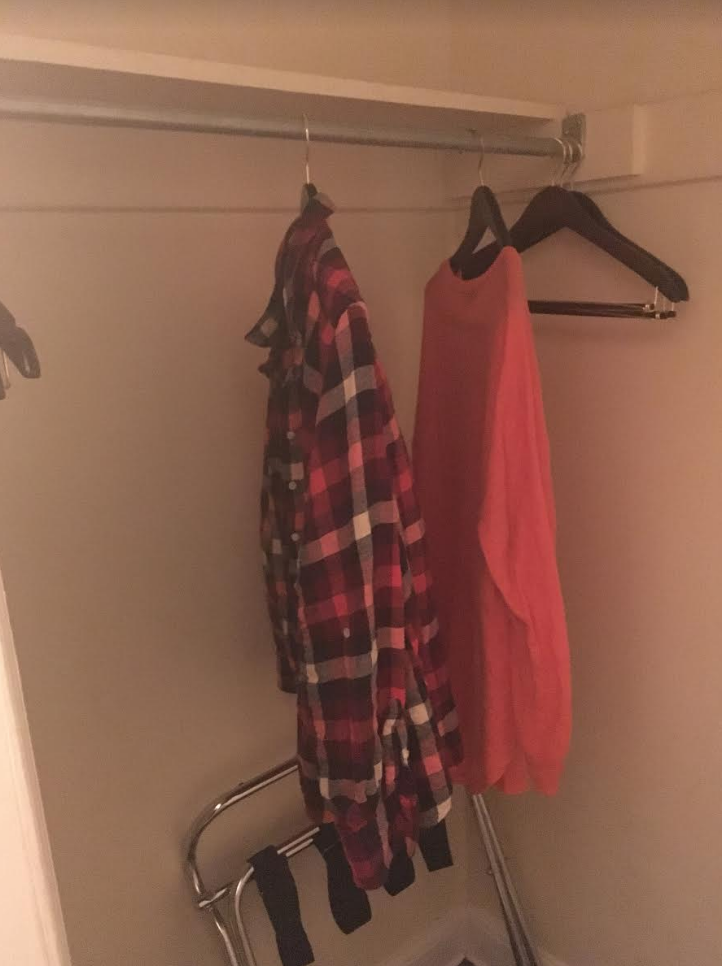 Thanks for watching the live video! If you have questions for us to try to answer view ouija or tarot, just leave them in the comments, we will try again later.

So, the ghost tour. I did learn a lot of interesting stuff that is not available online, as I read pretty extensively before I came here. One of the most interesting stories (because it involves a celebrity) was about Jim Carrey’s 2 hour stay in room 217. Apparently he could only last that long and won’t say why, but it *sounds like* the resident ghost of 217 (Miss Wilson) didn’t take kindly to an uppity movie star staying in her room — especially since in her time single men weren’t allowed to stay here.

Hey guys, I just got back from a ghost tour by one of the Stanley’s staff and a “theatrical seance”. I’m going to go on Facebook live and give a tour of the room and then talk about what I just experienced.

We’re about to go on the hotel’s ghost tour, and then we’ll attend a “theatrical seance”. Afterwards, we’re going to dive into the Ouija board and directly seeking out some supernatural evidence. We’ll be on Facebook Live around then, check back in around 9:30.

In the meantime please leave questions in the comments, we’ll use them for Ouija and tarot later.

We’re back from dinner and Miss Wilson did NOT clean up our room, unpack our bags, do our laundry, or finish any of my writing for me.

We did, however get to visit the grounds and take some more pictures: 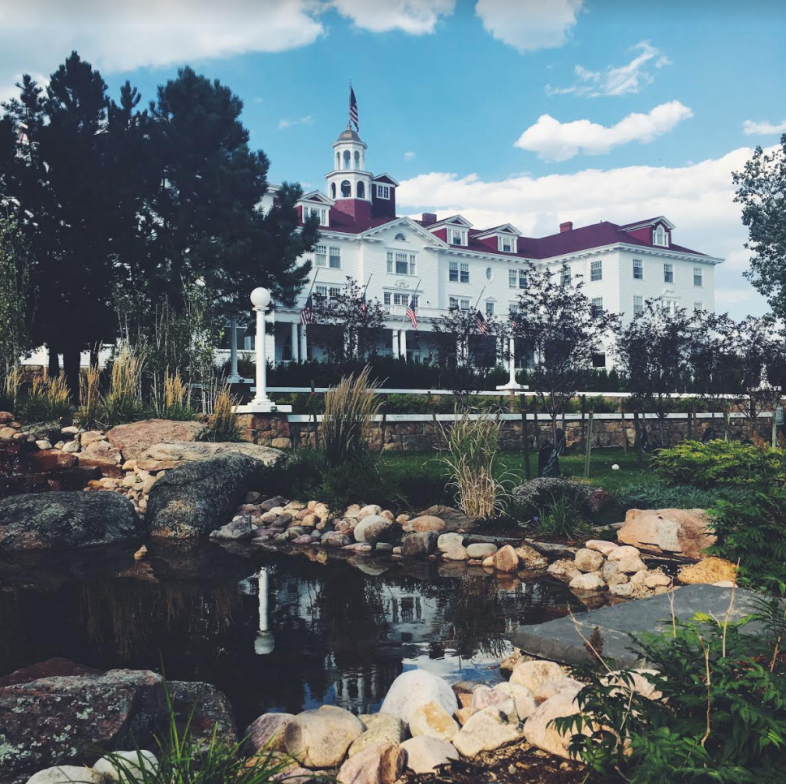 This reminded me of the hedge animals from the book: 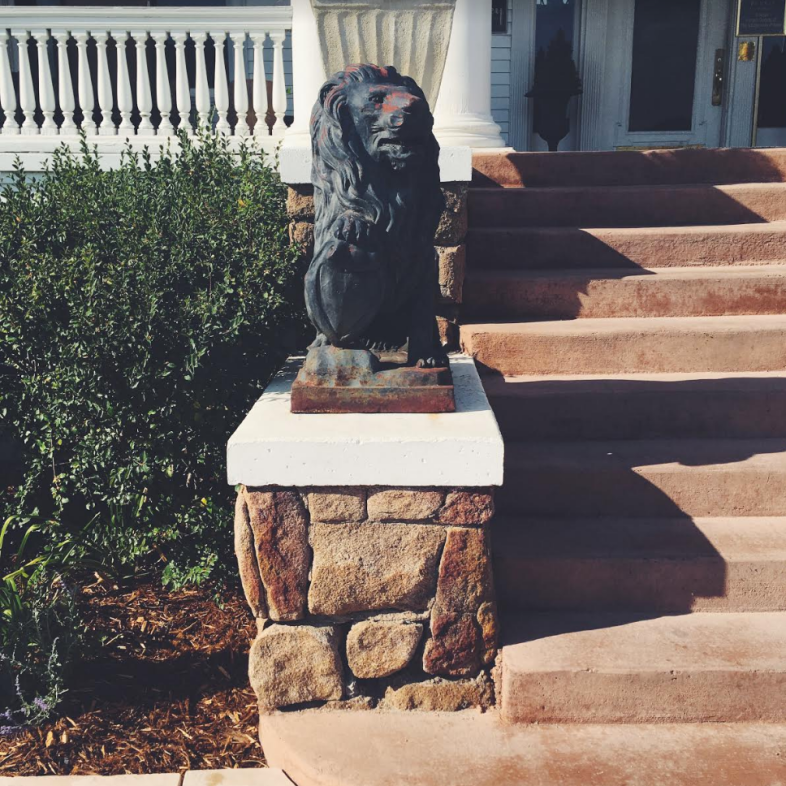 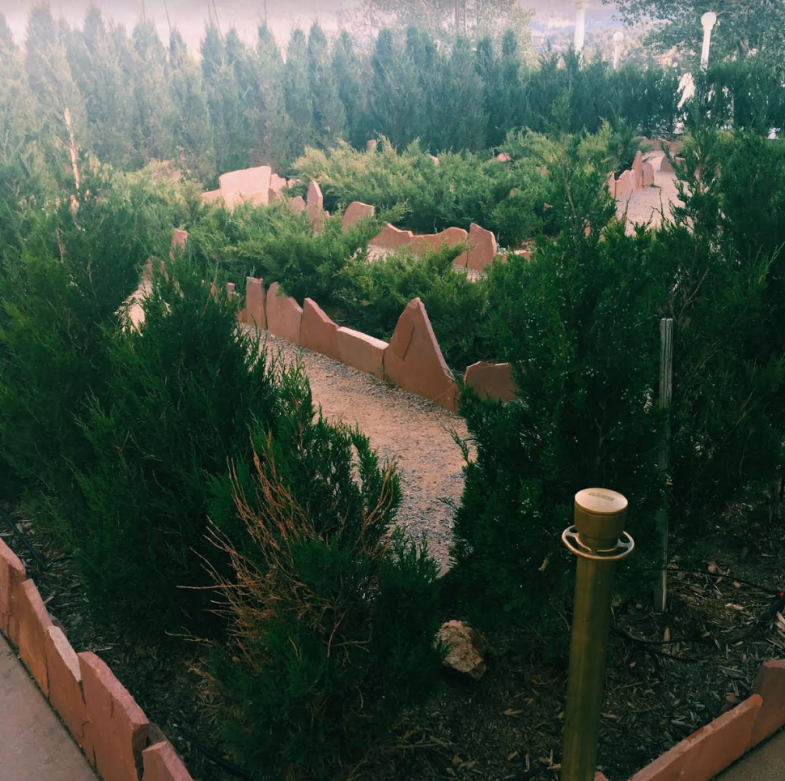 A special beer they brew up here in Estes Park: 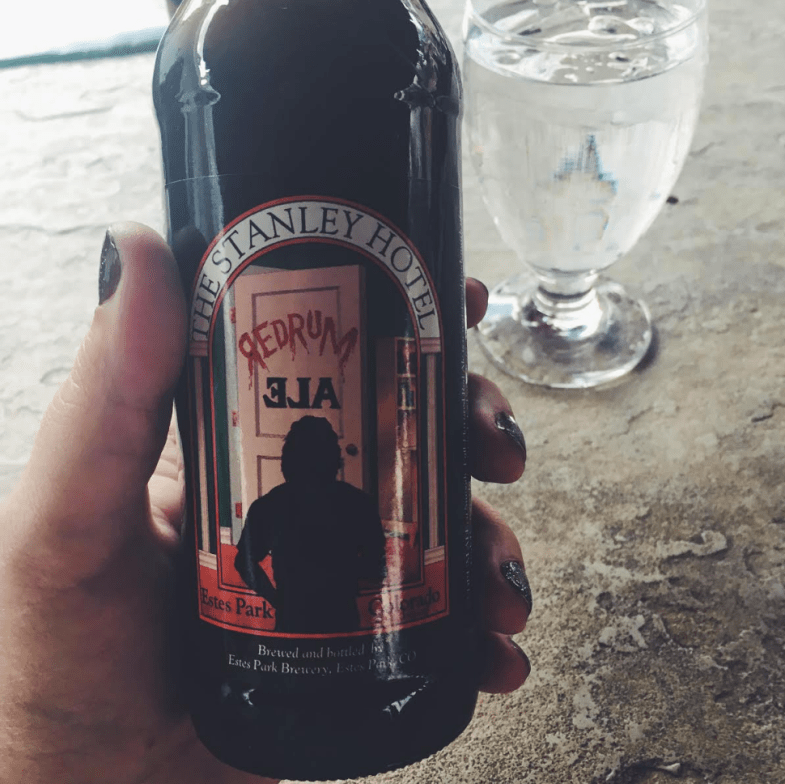 Feel free to ask questions in the comments. We’re going to get dinner and then see if we can use our ouija board before our ghost tour with the staff.

We’re going to go to dinner and get some photos of the rest of the hotel. While we’re gone we’re going to leave two “tests” for the ghosts.

1. I know Stephen King isn’t dead and haunting this hotel, but he’s such an important part of the history of this room that I’m going to leave a book by another horror writer (the amazing Shirley Jackson) out and see if anything happens to it: 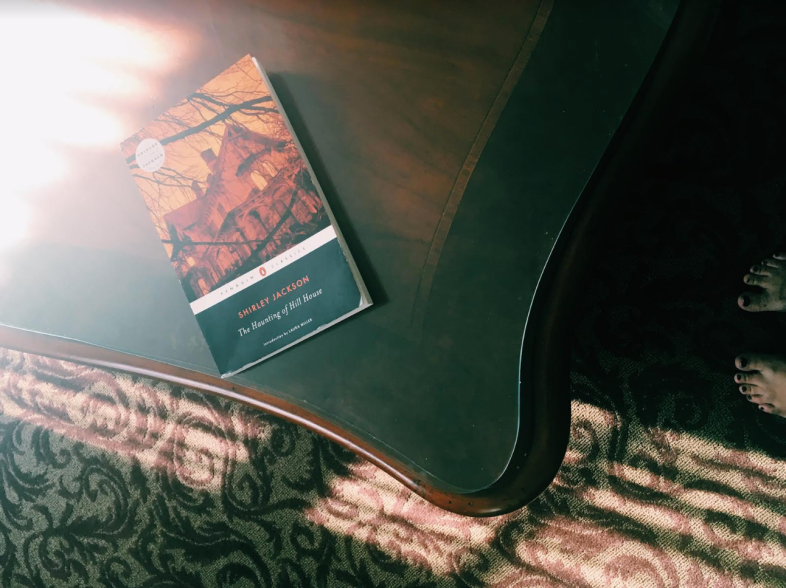 2. Since Miss Wilson is such a neat freak I’ve left a cup on the ground next to the garbage can: 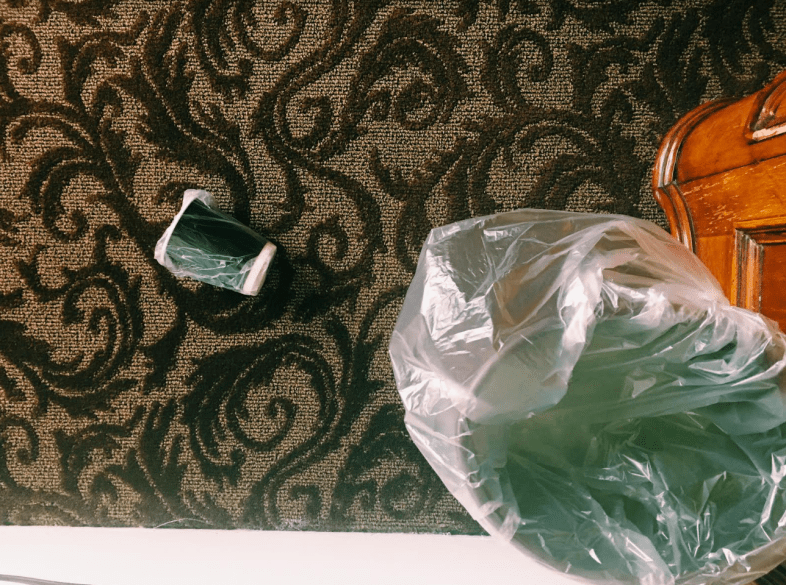 There’s said to be a ghost specific to room 217.

Back in 1911 this was the presidential suite of the hotel. During one summer storm the power in the hotel went out. A maid, Elizabeth Wilson, was sent to light the rooms with gas lanterns while the guests waited in the lobby. There was a gas leak in the room when Miss Wilson entered with a lit candle. There was a massive explosion that severely injured her. Stanley (the owner of the hotel) got her medical care and made her “head chambermaid” until her death in 1950.

After she died, she became a type A ghost of sorts. She’s reported to unpack guest’s bags for them, line up their shoes, and tidy the room when no one is present.

A little surprising, then, when we opened the door and found pillowcases randomly scattered on the bed. Is this a ghostly presence? Or a careless cleaner? 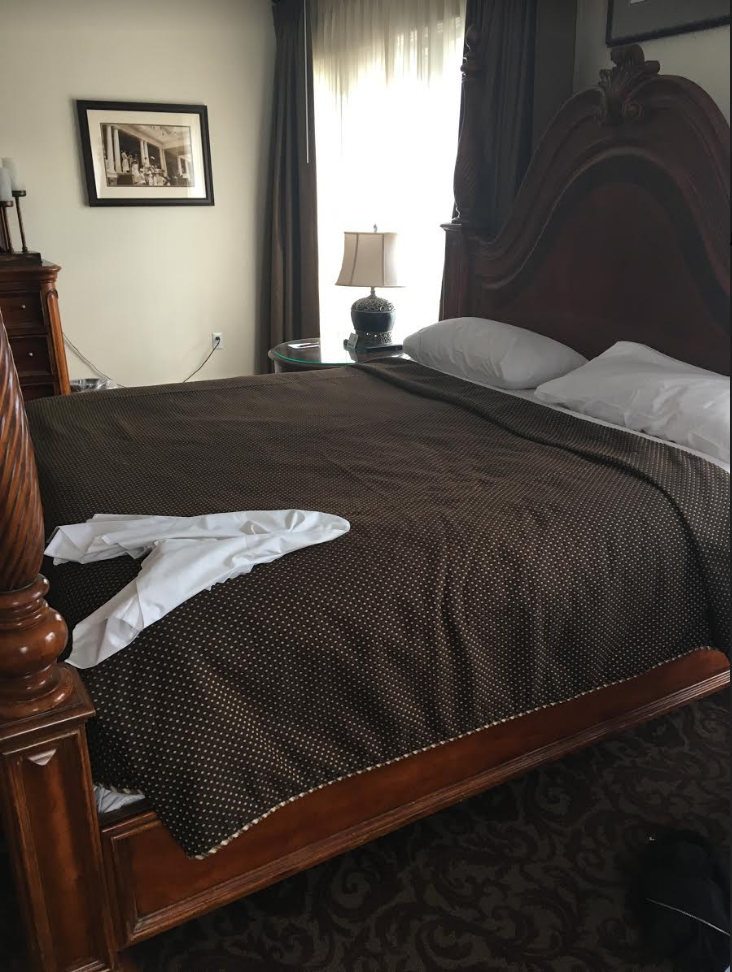 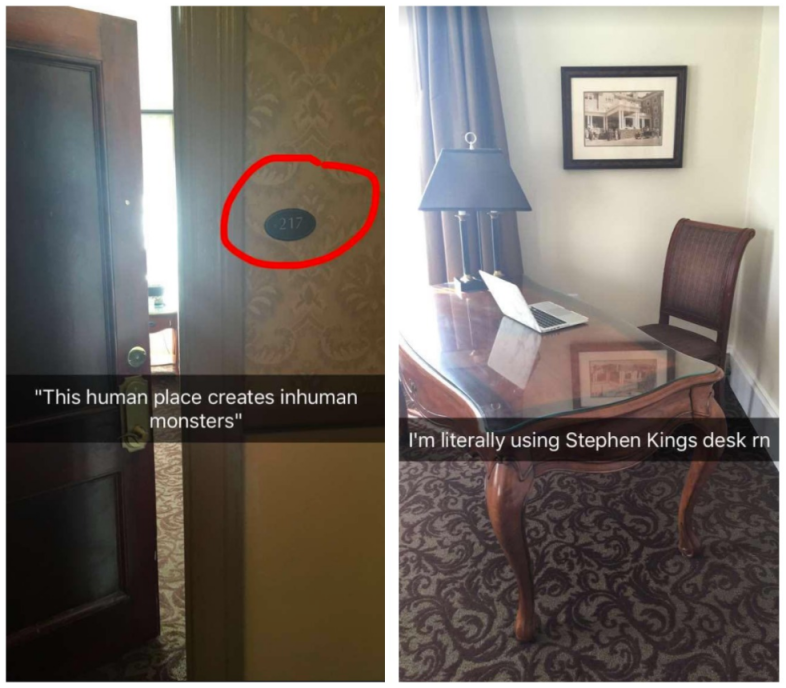 I’ve been to Estes Park a few times before, but this is the first time I’ve been in the Stanley. It lends some credence to my theory that there’s no way I can get that freaked out tonight. Hotels seem inherently safe (which is perhaps, why The Shining is so unnerving — it takes something we think of as “safe” and makes it terrifying) because you’re surrounded by people. Especially on this sunny Sunday afternoon the Stanley is crawling with people here to tour the hotel and explore the grounds.

Another fun fact about the Stanley is that they play Kubrick’s movie 24/7, every day of the year on a dedicated channel at the hotel. I happened to turn it on to a very serendipitous scene:

My writer friend and I are now watching the scene where Wendy brings Jack lunch and asks “get anything written today?” And we both “SAME-ed” this scene so hard. Maybe he wouldn’t have flipped out and gone crazy if she hadn’t been such a whiny nag who commits the cardinal sin of being married to a writer: asking how their writing is going.

Leaving aside for a minute the specific deaths and hauntings that have occurred since the hotel has been built, the town is said to be haunted or cursed in other ways. There are “time warp” caves, “Indian curses”, and reports of skinwalkers stalking the area.

Here’s a report I found this morning from 1885 about mysterious “blue mists” that haunt the Estes Park area, and eat people alive leaving behind bizarre tripod footprints:

Here’s a description of one of the blue mist’s victims:

Finally, a search party was sent up Mount Caplain where they found Bill’s three beloved hound dogs ripped to shreds, surrounded by the same peculiar hoofprints that the enigma had warned about. Inside Bill’s cabin, they found what was left of the misanthrope after the mystic haze got a hold of him. At least the oldster died a hero, since he tried to warn others about the carnivorous mists.

We’re about to pack up and head up the mountains to the hotel. Stay tuned for updates later this afternoon as we check in and get to talk to the staff. For now, you can read my own history of loving The Shining and some pretty creepy background info here.

The Stanley hotel in Estes Park, Colorado is routinely included in lists that describe the most haunted places in America. There have been reports of hauntings and paranormal phenomena since the hotel opened over a hundred years ago. Most famously, Stephen King stayed there in 1974 — he and his wife were the hotel’s only guests, as it was off-season. What King experienced that night was so vividly unsettling, that he had outlined the entirety of The Shining by morning.

Here is a quick look at the most terrifying details of the place we’ll explore tonight:

[*] While filming Dumb and Dumber, Jim Carrey requested room 217 but checked out after just three hours. He refuses to talk about what happened to him there.

[*] This picture of a little girl ghost captured by a guest of the hotel.

[*] The story behind what may have inspired King’s book: “Elizabeth Wilson was the chief housekeeper who, during an early summer storm in 1911, was injured in an explosion as she was lighting the acetylene lanterns in room 217. She survived with broken ankles, but to this day takes special care of room 217’s guests, possibly even King, who stayed there just days before the near-deserted Stanley closed for the winter. King is said to have encountered a young child during his stay, though there were no children visiting at that time. Guests have reported items moved, luggage unpacked, and lights being turned on and off.”

Tonight I’m staying in room 217. I’ll be updating this live blog as the day/night goes on.

I’m Getting Way Too Good At Living Alone