Hi Everyone! I hope you’re recovering from the excitement of a two night Bachelorette phenomenon. Not really sure why this #ChadDramz warranted two nights, especially when the most dramatic part appears to be him showing up at the chalet where Jojo and Alex are getting cozy in front of a fire, and that part is being aired next week. Maybe they wanted to draw attention away from featuring mega-fuckboy and probable rapist Ben Roethlisberger amid all the Brock Turner outrage.

This week I decided to rank the boy from least to most fuckboy-ish. Enjoy!

Ali might be a slight fuckboy because he’s a 30-year-old bartender, but from what we’ve seen he has a decent personality (and his eyebrows are perfect, basically).

Christian is a fuckboy. Christian lives in a grown-up frat house with his brothers. This is not a person who is ready to be Mr. Fletcher.

Nick is a fuckboy. He showed up in a Santa Claus outfit for their first date, making a weird joke out of something Jojo is taking really seriously — using the show to find real love.

My biggest regret about Chad going home this week is that I can’t rank him at the very bottom of the overall fuckboy ranking because he’s already out of the running. I feel kind of bad for him, he just lost his mom and is clearly right in the middle of some kind of angry nervous breakdown, but hopefully seeing himself on TV will lead to him getting help — and not further into his weird denial that everyone who isn’t as shitty as he is is “fake”.

BTW was this low key terrifying for anyone else ????

Alex is not a fuckboy. Alex is good to a fault, you can tell that. He’s probably too self-righteous, he’s probably too hard on himself (and other people). He probably has a lot of faults, but being a fuckboy isn’t one of them.

Derek is not a fuckboy. He moves rooms instead of being around Chad — which is the right thing to do — and then addresses conflict with him like a rational, non-violent person not a victim of their swinging emotions, totally opposite of Chad.

Grant is not a fuckboy. Grant is a firefighter and he saves people’s lives, okay??? Get with the program.

Not really sure about these faux-artfully ripped jeans tho:

James Taylor is not a fuckboy even if going by “James Taylor” while trying to become a singer-songwriter is a total fuckboy move. He’s a dork, and he owns his dorkiness which is totally cute and makes him somehow actually sexy. And… the way he dealt with getting cut up on the football field was really hot.

Chase doesn’t seem like a fuckboy. He seems down to earth and like he hasn’t let his (v v hot) looks corrupt him too much.

Luke doesn’t seem like a fuckboy. He seems like he’s mature because he’s had a lot of hard experience in life, and a lot has been expected of him. Those are good qualities in a partner.

It remains to be seen how much of a fuckboy Wells is. He’s not automatically *not* a fuckboy just because he’s not a meathead, but they haven’t show his personality enough to make sure he’s not a “nice guy” fuckboy.

James F might be a fuckboy. We don’t know too much about him. He owns a boxing gym, but not every meathead is a fuckboy. We’ll wait and see.

Robby might be a fuckboy. From previews it looks like he has a girlfriend back home or some kind of shady situation where he dumped her out of the blue to go on the show.

Vinny is a fuckboy. No one really knows why Vinny is still around. If he was a woman, people would assume he slept with a producer for his weird continual presence on the show.

Jordan is kind of a fuckboy. I get it, he’s super hot and his brother is even hotter and I’m cheering for him and I really want Jojo to become sister-in-law with Olivia Munn too — but, let’s be real: he’s a golden boy who is used to getting his way. This is not a recipe for relationship success. I guess he big time cheated on his last gf. As much as I love him and want to cheer for him, he also seems like the kind of guy that isn’t that great behind closed doors. 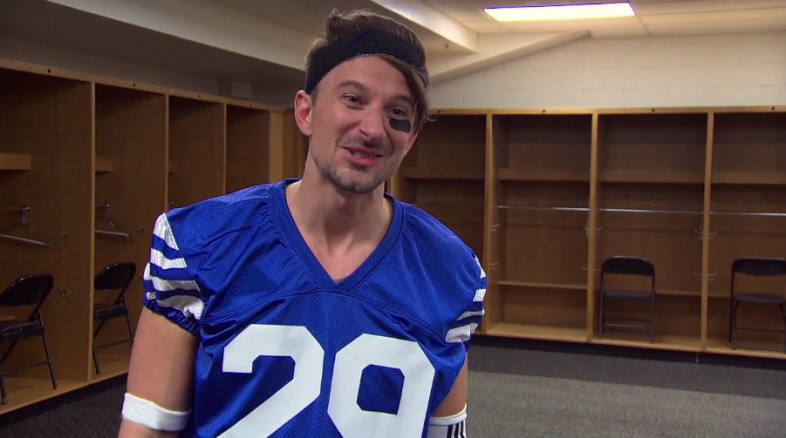 Evan is a major fuckboy. I definitely think Chad was more in the wrong than Evan in their interactions, but Chad wasn’t wrong about Evan pushing him. Instead of like, focusing on Jojo or getting a hobby or something Evan weirdly obsessed about Chad and provoked him when he should have just focused on being the better person. Also his lewk is 100% fucccboi.

Daniel is deeeeeefffffinnnnetly a fuckboy. Daniel was raise by two fuckboys and now is such a potent fuckboy that scientists are studying his genes. Daniel is peak fuckboy and every person he stands next to is less fuckboy in comparison.

Burning questions for next week’s show

What will come of Chad’s (literally insane) visit to the Bachelorette chalet???

Why is Jojo crying so much???

What will happen when Chad starts pushing Jordan around???

Who locks themselves in this bathroom???

What’s up with Jordan consoling Jojo in the hallway???