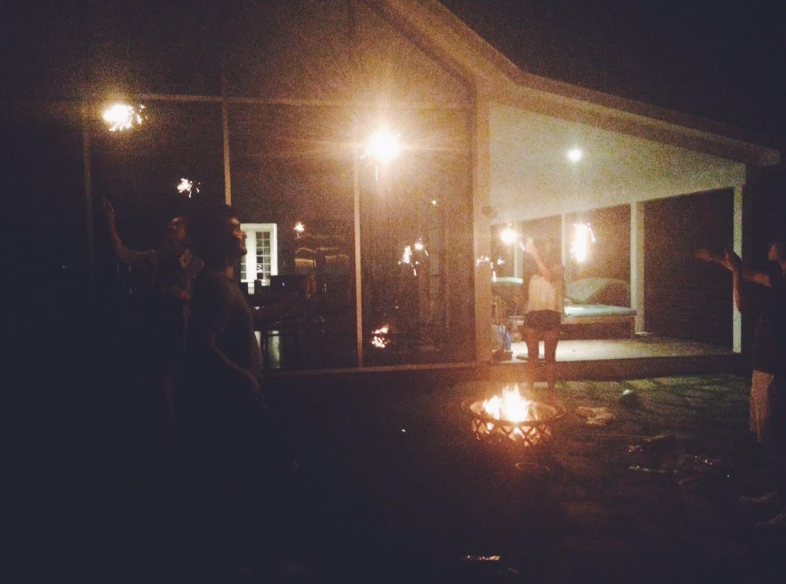 There was a night in the mountains when we decided to tell ghost stories.

The sky up there was the blackest I’ve ever seen. When the power went out (often) it wasn’t like how in the city you can navigate by the dim orange of the light pollution, there is simply blackness. I would walk the path from the cook house or the library to my cabin by memory. If my roommate was with me we would sing ‘Cecilia’ to try not to be scared about what could be hiding just a few feet from us. At home, we could always make a fire and then we would be able to see again.

During a longer delay than usual in getting the generator working, we sunk into the eeriness instead of fighting against it. My roommate and I and the boys down the road sat on our old furniture and made the fire big and told our stories.

I remember the one I must have told. A little toddler in a trailer park – I saw men I knew even at the time were ghosts. My sister and I ran away and hid inside as if our feet curled up away from the floor would protect us from monsters we knew would follow us and grab our legs.

But the story I always think about when I see an open door late at night is the one my friend Karson told.

As a teenager on a late night call he laid on his mattress on the floor of his room in his parents basement. Like all of us, he had a religious upbringing and the conversation turned towards heaven and hell. As he spoke of hell, a shadow appeared in the doorway. Unsure at first and unwilling to acknowledge what might be a scary reality he ignored it and they talked about satan and what power he might have against god while we’re on this earth. The shadow’s outlined thickened. Like a dusk that comes suddenly the creature became whole and sturdy while Karson was still unsure whether his imagination was playing tricks on him.

Nothing happened, there is no climax to the story except for the gradual dawning of the knowledge that this was a demon standing watch — that they exist and they are listening and there is nothing we can do.

He said he knew this much, that spiritual warfare was real. That a warning had been sent. A sign that he should take a side.

There are people who don’t believe, and what is going on around us is hidden to them. I can’t help but be jealous of this ignorance. When I doubt I think of my friend who I trust completely, alone in the basement with someone who had been sent to scare him. I never have conversations about the devil anymore.