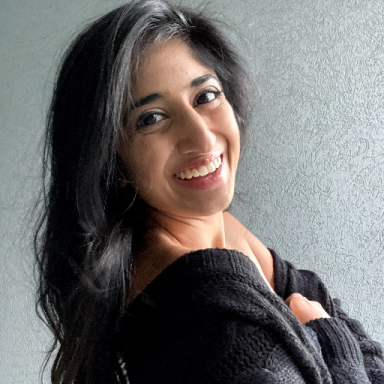 I wait outside of the banquet hall. I don’t know if he will come or if I will lean against the cold concrete building alone, staring at my iPhone, scrolling through Instagram, and wondering for the rest of the night.

My back absorbs the bass thumping from inside the hall. Families and groups of friends enter and exit the heavy gilded doors, just getting there or just leaving.

I decide that if he doesn’t come in the next 10 minutes, I’ll leave.

I unzip my Kate Spade wristlet and pull out my lipstick. I apply a layer without consulting a mirror. I squeeze my toes together. My heels start to ache from standing out here for so long. I knew I shouldn’t have worn my nude pumps. I knew I shouldn’t have given him the address to someone else’s wedding reception as a first date. What was I thinking?

I was thinking, Why not?

I had wanted to crash a wedding party for months, so I had planned this outing for a small group of my best friends as a way to unwind from the stress of midterm season. I didn’t have any midterms, but I wanted an outing and they were all stressed, so I thought, what a spontaneous, fun, frugal idea. I picked the largest banquet hall on a long weekend Friday night, told everyone to grab an Uber and dress up, and set my plan in action. I was usually the one to plan social outings, and this was supposed to be one for the books. I had even created a Snapchat filter.

A black SUV with tinted windows rolls to a stop in front of me. My heart races and I run my hands through my hair. I plaster on a smile. I haven’t seen him in months, though I spoke to him this morning to make sure he was still coming. I wonder if his features are just as defined, his smile just as boyish, and his hugs just as bear-like.

The passenger and back doors swing open and an auntie steps out with her teenage sons. I slump back against the wall. The SUV drives towards the parking lot and the auntie strides towards me.

“Is Manny inside?” she inquires.

“How are your parents? Good? What are you doing out here?”

“Okay. See you, then.” She reaches to touch her palm to the top of my head for a brief moment and continues inside.

Two of my friends couldn’t come because their midterm was moved to tonight. One couldn’t sacrifice a night of studying. One had unforeseen family plans. Last night, I had more than 200 group chat messages full of apologies and excuses. I smiled as I scrolled through them; I had thought someone was in trouble or upset when I saw so many messages. I told them not to worry, we would plan an event after midterms.

“Are you still going to go?” Sim typed.

“With who? Herself?” Jade responded.

I shove my hands deep into the pockets of my black trench coat and look up at the fluffy flakes that fall and melt into my hair. The gilded doors swing open but I don’t pay mind to anyone’s entrance or exit. I think about the Pilsbury chocolate chip cookies I baked yesterday that I’ll eat when I get home tonight. I feel a shadow approach while I stare into the sky.

“Got a light?” a deep voice says near my right ear.

I glance at him and respond, “I don’t smoke.”

“You never know.” He bums a light off of an uncle on the other side of the set of doors and resumes his spot, leaning on the cold concrete a foot to my right. “You came here alone?” he inquires.

“Just waiting for someone,” I reply.

“How do you know Jay and Ilsa?” he asks.

“Distant cousins, mom’s side,” I breathe.

“Right,” he pauses. “Ever crashed a wedding before?”

I offer a tight-lipped smirk. “No, you?”

I glare at him and cock my head to the side. “No?”

I shine my grin towards the snowflakes and feel around my right pocket for my phone. I look at the time and push my phone to the bottom of my pocket again. My breath appears white in front of my face.

“How do you know the couple?”

“My elder brother Yan found Seema on his do-gooder trip to India. Turns out, she was there for a do-gooder trip of her own. Fast forward three years and I’m smoking in front of their wedding reception talking to someone who’s trying to crash it.”

“Just signed papers. Lots of partying led up to tonight, though.”

We met at Sim’s 21st birthday party and my mind had been drifting in his dreamy direction six months since. Sim’s birthday tradition was to throw a party at a bar she had never been to before. Which was difficult for Sim, ever the bar-enthusiast, but she had now managed it for three years straight.

I, ever the best friend, sat her on a stool by the bar surrounded by her friends and a few choice cousins, and created a chorus of “Happy Birthday” that the entire bar had joined in on by the end of the song. She blew out the candles on her strawberry shortcake with “Happy Birthday Simu” scrawled on it in red icing, I handed her a tequila shot, fed her a glob of cake, and felt a tap on my right shoulder.

“Do you recognize me?” He leaned against the bar.

“Dance with me?” He raised his eyebrows and offered me his structured hand.

Sim walked to the washroom with her cousin to wipe the cake from her face, Jade cracked jokes with the guys, Vij ordered fries and sat down as usual, and I appraised my new company. He was wearing dark wash, straight-legged denim, chocolate brown dress shoes, a grey Henley, and a constant smirk. His hair was swooshed to the right, his cheekbones and chin were prominent under his line-up, and his eyes were studying my face. I craned my neck to study him back. I smiled tight-lipped and took his hand.

Ten steps to the left and we were on the dance floor. He dropped my hand, looked me in the eye, and began mouthing the lyrics and doing an interpretive dance to I Want It That Way by the Backstreet Boys. It was Throwback Night at the bar. I brought my hands to my face and shook with laughter, chugged my beer, and joined him for the rest of the night.

After I had accepted his Instagram follow request that night, he bear-hugged me goodbye, told Sim to have a happy birthday, and climbed into an Uber with his friends. Driving away, he messaged me, “Hey. So much fun. You’re fun. Let’s do something fun again.”

The day after Sim’s birthday, we messaged for the entire day and exchanged phone numbers. We learned that we were both into spontaneous outings, loved to dance, were actually in the same Soc lecture, and watched a lot of the same TV shows. After a few failed meet ups, the messages stopped, but my thoughts didn’t.

I pull my phone from my pocket again and drop it back into the depths. I reach towards my knees to zip up my coat.

“You haven’t even come inside yet,” says the stranger.

When my friends had cancelled two nights ago, Sim had called me. She apologized for the last minute family plans that had come up and asked again if I was still going to crash the party. When I told her I would probably watch a movie, she brought his name up.

“We’re not talking about him,” I scolded.

“You’ve wanted to reconnect. What better way than a random outing? Come on, it might be fun, and you’ll get to see him again,” she prattled. “What’s the worst that could happen?”

I was easily convinced. I hung up the phone with her and sent him a carefully constructed message about how it had been awhile and it’d be fun to reconnect. I even told him that I had something fun in mind after some small talk and joke-cracking.

“What’s that?” he inquired.

“Spontaneity,” I typed slowly. “Dress your best, don’t drive, and trust me?”

“Can’t wait, sounds just sketchy enough lol. Just tell me where to be.”

My smile spread from ear to ear as I messaged him the address of the banquet hall and a time. My cheeks flushed and my heart pounded as he sent an “It’s been foreverrrr. Down for a fun time.”

My ears burn like I’m a pressure-cooker and I see the banquet hall through a blurry screen. I inhale flurries through my nose and exhale fog from my mouth as I call myself an Uber home and the groom’s brother reenters the banquet hall.

I clamber into the green Corolla that picks me up and I hear a familiar voice as I pull the back door closed.

The groom’s brother taps on the window and I roll it down. He hands me a decorative tealight.

“Here’s a souvenir. Now you can say you’ve crashed a wedding. I still say come inside and have some food, but if you do want to leave, it’s their loss. Whoever you were waiting for.”

I smile, thank him, roll up my window, and ask my Uber driver to start the car. My phone blinks with a message as he leaves the parking lot.

“Hey, where are you? Do you want to come to my friend’s house party instead by any chance?”

I turn my phone off, lean my head against the cold headrest, close my eyes, and think of the tall glass of milk I’ll have with my cookies in 20 minutes.

Ebbing and flowing my way through life.