Skip to content
Report This Article
What is the issue?
Article contains spoilers and is written for people who have finished the book. Buy A Little Life on iBooks or Amazon.

Swaths of people have expressed on Twitter how harrowing Hanya Yanagihara’s operatic novel, A Little Life, is. People speak of having panic attacks while reading it, of crying uncontrollably, and of being left physically exhausted by the plot’s machinations. What is it about this book? Why does it take so much out of so many readers?

The simple reason is that Yanagihara is a master of the macabre. A Little Life is a tour de force of horrible images. Take, for instance, Yanagihara’s depiction of a five-year-old boy suffering from an obscure neurodegenerative disease. The boy screams in pain to his parents but is so debilitated by the disease that his screams come out silent. Even more devastating is that although the child’s eyes have been sealed shut, “tears, or clumpy, yellowish mucus” still leak through his sickly, stitched-up eyes. Is it possible to conjure a more horrific scene? Yanagihara does when she describes a kidnapped child being raped so brutally that he longs for the compassion of a former rapist. This, among so many other moments in the book, make any sane reader break down. It’s devastating, and the only human response is to bellow and curse that words such as this could even exist, let alone that things like this happen outside of fiction.

However, A Little Life isn’t just tragedy porn. To borrow a metaphor from the book, the landscape of A Little Life is like New Zealand. At one moment, the text lingers on an icy cliff of desolation, and the next it has you in a calm and warm meadow by the sea. Yanagihara is as much John Green as she is Stephen King, and A Little Life is a uniquely dreamy book filled with fairy tales of people falling in love with each other as friends, romantic partners, and kin. “Wasn’t friendship its own miracle,” Yanagihara asks in one of her sweeter moments, “the finding of another person who made the entire lonely world seem somehow less lonely?” At another juncture, Yanagihara describes the embrace of two lovers that would fit as a caption on any twee Tumblr: “He holds him so close that he can feel muscles from his back to his fingertips come alive, so close that he can feel his heart beating against his, can feel his rib cage against his, and his stomach deflating and inflating with air.” This play of contrasts is incredibly effective at moving readers, bringing out in us a pathos that spans the full spectrum of human feeling. A Little Life, then, works because it merges extreme terror and extreme sweetness into a coherent narrative. Simply, it’s excellent melodrama.

What is perhaps most noteworthy, however, is that A Little Life isn’t just a well-executed novel. It’s also a rigorously structured meditation on fatalism. This fatalism, which Yanagihara brands throughout the book as “Axiom of Equality” or that “X = X”, glazes the whole book with a hellish frozenness. To say there is no redemption in A Little Life is to not go far enough. There is no character development at all on any meaningful level. “The person I was will always be the person I am,” says Yanagihara’s character to himself as his boyfriend violently beats him. “The context may have changed… But fundamentally, I am the same person.”

So it goes for every character in the book. The person who surfs through their adolescence surfs right through adulthood and old age. The young father with the sick son grows old, and as an older man he adopts another son who turns out to be sick and also dies before him. The friend with the sick brother finds a best friend who is also sick, but, as with his brother, he cannot help him in any meaningful way. The sick person remains sick and incapable of transcending his trauma even when he has everything in the world. X remains equal to X with a radical stubbornness.

Yanagihara’s characters are constantly wondering if it is possible to outsmart this fatalism. One character asks early in the story: “How might things have been different if I spoke only one sentence?” Another asks: “Had we missed something? Could we have done something different?” As the book churns, Yanagihara ultimately reveals that the answer is a stern “no.” The characters’ lives are, she writes, “the same cycle, the same circle, again and again and again” until the release of death. Who we are is who we are.

Yanagihara ingeniously constructed the book’s format to mimic the circular repetition of the plot and characters; the book is built as an infinite loop, a sort of eternal return. The “final” scene, where one character asks another character to tell him a story, isn’t the final scene because the story asking to be told is the story that commences the book’s first page. The book thus repeats itself “again and again and again,” and like the characters it doesn’t develop but just repeats itself over and over. Hence the first chapter of A Little Life is called “Lispenard Street,” and so too is the last chapter, because they aren’t distinct chapters but rather a way of linking and binding the book together into one hopeless and vicious circle. That Yanagihara can write such engaging melodrama while simultaneously building such a tight conceptual framework is what makes A Little Life so profoundly upsetting, the book despairs both as a story and as a philosophical meditation.

The more bright-eyed among us might say that this hopeless nihilism is overplayed, arguing that great writers need to provide solutions or at least open us up to the possibility of individual and cultural improvement. This is almost certainly the case; still, it could be that Yanagihara’s lack of solution is the solution. It might be that despite our better angels telling us that we can surpass our trauma and make whole what we have lost, we cannot. So the answer, the most ethical thing we can do, is not to get better, but to come to terms with the inadequacy of our little lives. And thus we close the book, and like Harold under the portrait of Jude and Willem, we wail and wish we lived in an alternate universe where this wasn’t the case. 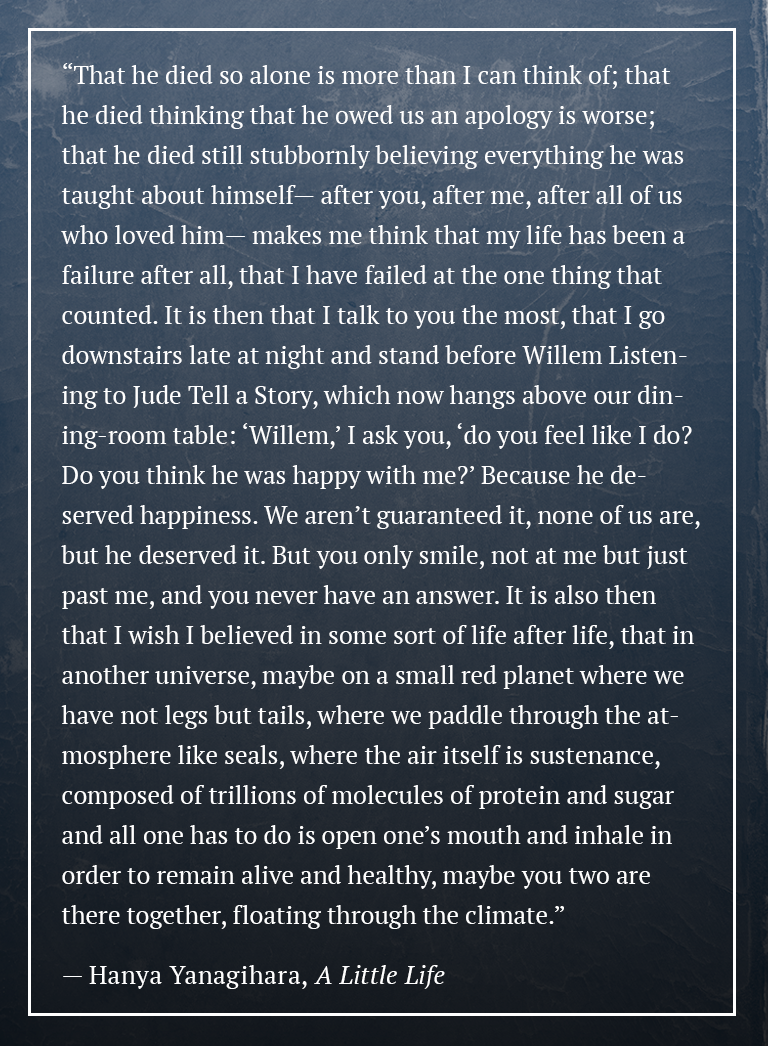 7 Years: An Essay In The Fifth Person

If You Have Enough Money, There’s A Place You Can Go Where They’ll Make Your Sickest Fantasies Come To Life

There’s Something Strange Lurking In The Marsh Behind Our Houses, And Now Nothing Will Ever Be The Same