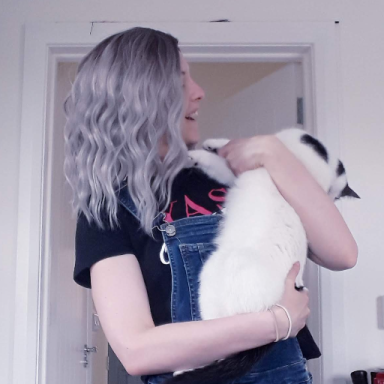 How many times have you looked in the mirror, prodded your stomach, or finished a meal and thought “I feel fat”? Too many! But through anorexia recovery, I’ve come to learn that while fat isn’t an emotion, it very much is a feeling.

While you won’t find the word “feeling” or “emotion” anywhere within the textbook definition of fat, it’s a very real experience for many, especially those who’ve ever experienced an eating disorder. Fat is many things, and it can definitely be a feeling.

Feeling fat bears no relation to being fat. You can be in a small, malnourished body and feel ‘big‘. Quite often, when I refer to myself as feeling fat, I’m met with the obvious retorts of “Oh, shush. You’re not fat.” And that’s when I feel like reminding them that while I’m not by definition fat, I feel uncomfortably big in my own skin. That’s the best way I can think of to describe the feeling of fat.

But where does the term ‘feeling fat’ come from?

For most people, it’s a case of associating “feeling fat” as being negative. When someone says “I feel fat”, they might also feel unworthy, unloved, or even frustrated. Not only is fat not described as an emotion, but none of the above are synonymous with it. Not even the word “negative” is in any way related to fat.

All these associations have been made starting with our current society. Fatphobia and body shaming are still at large, despite all the advocacy behind them.

We’re being taught that fat must mean unhealthy, lazy, or ugly, while ‘thin‘ is used when we feel happy, loved, successful, worthy, or pretty. We’re associating positive emotions with a word that means “having little flesh or fat on the body.”

“Ah, but you’ve just said fat IS a feeling. But that’s not what you’ve written here.”

And you’d be right! But what I’m saying is, that while fat can be a feeling, it’s not a feeling in the way anger or sadness is. Those two things are emotions. You might go to bed because you’re emotionally feeling sad, and this sadness could stem from feeling fat. Do you get me? Feeling fat isn’t an emotion, but it can influence them!

Am I sad today? What about anxious or irritated? Why would any of that suddenly make me feel fat? It’s a result of years of misunderstanding my negative emotions. For a long time, my weight has been how I’ve coped with difficult feelings. So to feel fat on a day when my emotions might be chaotic is a perfectly valid experience.

For many with disordered eating habits and poor body image, there’s guilt and shame being stowed away. We’re ashamed for many reasons—for overeating, for under eating, for gaining weight, for being off work due to illness, for crying, or even for not crying.

In my own experience, If I gain weight, I feel an intense amount of shame. I feel unlovable and like a fraud. I’ll even go as far as to convince myself that it was all a hoax and I was never ill in the first place. But I wouldn’t say any of that out loud. Instead I’d say “I feel fat” because it’s easier than diving into actual emotions. I prefer to blame my body and weight instead of dragging up the negative emotions bubbling below. While I’m not necessarily processing fat as an emotion, I 100% feel fat. I feel tight, bloated, and like my skin is ripping at the seams. While being in a bigger body is nothing to be ashamed of, in the eyes of a recovering anorexic, it’s one of the worst things to come out of recovery.

Let’s talk about emotions and fat.

There are so many emotions for us to choose from, both positive and negative. So next time you’re feeling fat, tap into how that impacts your emotion, or vice versa. What emotions are you struggling with and how could they be impacting how you see yourself that day? If you can’t pinpoint anything, don’t worry. It could just be that you’ve woken up feeling more bloated and heavier than usual. No shame. We’ve all been there. It’s perfectly fine to identify that feeling of splitting at the seams as “feeling fat.” However, it’s very important to remember that while it’s a feeling, it’s neither an emotion nor a fact!

I love coffee and cats.