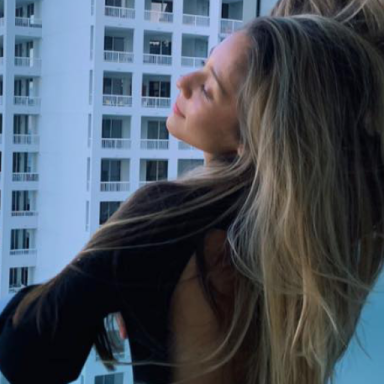 I know these past few months have been difficult. Trust me, I know.

You wake up each day with the intention of moving forward, but you are unavoidably reminded of him when your Spotify shuffles to that one song. You can’t help but think of him when you eat a PB&J, just like the kind he used to make for you. It’s impossible not to remember when you find his white tee in your dirty laundry. And it’s in these moments that you can’t help but recall how difficult it was to not fall in love with the mystery in his gaze, how tough it was to overlook his shy and seemingly peaceful aura.

You feel things deeply, and so you felt that there was so much more to know about him, so much beneath that mystifying stare. You wanted to delve into the intricacies of his mind. You wanted to see what was beneath that muscular, enigmatic physique. I mean, he did in fact seem perfect.

The thing is, you assume that everyone is good and kind and open, like yourself. And so it was impossible to see the reality behind his deliberate façade. You couldn’t have known the truth at the time.

Things started out swimmingly, as they typically do. He lured you in little by little, making sure to carefully conceal his numerous flaws. He was careful. And then, surely, when he had you securely in his palm, his utter sense of superiority inevitably began to creep into his comments or behaviors. The several unanswered text messages and his customary disappearances slowly but surely began to reveal his lack of empathy. His self-absorption would always find fault in you when things were clearly lacking on his end. In difficult moments, his demeaning and self-loathing side would berate you while embracing his victimhood. He was always perfect, and you were always flawed.

But you made excuses for him, I know. And please, don’t beat yourself up over this because the truth is, you’re a good person and you want to give people the benefit of the doubt. This is a wonderful thing. You always wanted to see the best in him. You wanted to believe he was who he portrayed himself to be in the beginning. You wanted to understand him and be the one woman he could get close to, especially when the picture he painted to you was of this poor, misunderstood guy who could never find the right one. You wanted to save him. You wanted to be that one.

I’m here to tell you that you that it is okay to not assume the worst in a human being. I’m here to let you know that most people in this world are not that horrible, even though this may seem difficult to believe right now. I’m here to remind you that you are a beautiful, beautiful soul, and there is nothing you could have done differently. In typical narcissist fashion, he lured you in and spit you out.

But please, please know that this has nothing to do with your worth or value as a human being and everything to do with his deep-rooted insecurities and past traumas. It has everything to do with the fact that he is broken and aching so, so terribly inside and knows no other way to be. He is wounded, my friend, and cannot help but wound others. You just so happened to be in his path of destruction when you were only providing love and affection. He didn’t know how to properly receive it.

But please do me a favor and cry. Cry and scream and shout as much as you want. Throw shit if you have to, because almost nothing compares to the pain you’re feeling. I know the pain of falling in love with someone who never existed, with someone who you so badly wanted to exist. He took off his mask, and in the process of doing so, he left you numb, paralyzed. You are probably still trying to process it, to make sense of everything. I know.

I’m here to tell you that there is no “processing” with a person like him. There is no sense in his actions, and there is no one single instance that caused him to walk away. There was nothing you said or did that caused this. I urge you to please take all the anguish, the ache, and go for a long run until you can’t feel your legs. Please take that agony and pour it onto a canvas or notepad until it hurts a little less inside. Take a warm bath with Epsom Salts and sob until you have no more fluid left in you, until your eyes are bloodshot and swollen. And when you are finished, dance to Daniel Caesar in your room alone. Hug yourself and pick yourself up and care for yourself, because you’ve been through a rough time. Repeat this each and every day until you feel like yourself again. Yes, the scar is very deep, but you are a strong person, and you are moving on. It hurts so badly because you gave everything you had in you, and that alone is a beautiful thing.

And despite the obliteration he caused, you are still standing. You are and will continue to be a GOOD human. You will find someone with the same heart as you, and he will stay wounded and will keep damaging others who happen to come across his path next. You are now out of his path of destruction. Take solace in this.