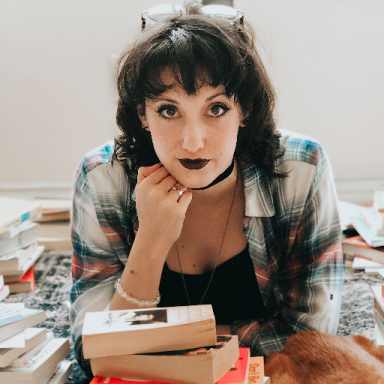 I didn’t know I was in a toxic relationship.

Why, you ask? Fantastic question. A question I’ve asked myself many a time.

I have no idea.

Well, okay, I have some ideas. Let’s see…

I mean, I know I did love my college boyfriend as much as I could at the time, but the more that I have thought about it, the more I’m curious if I needed him more than I loved him.

We were the “sewn-at-the-hip” type. We’d become one, which I’d thought was adorable at the time. Wow, we must be the best couple because our lives are one. We graduated from the same college, we moved in together, we eventually worked together at the same restaurant. From there, we had the same friends, the same hobbies, the same amount of money. Only- then we didn’t. I wanted more. I went out with my/our friends, I gained new hobbies, I was promoted at the restaurant. I was branching off and he felt left behind. He started to resent me for wanting more than watching the same action/adventure movie over and over. (No offense, man. I just can’t watch any of those for a good ten years or so.

2. I had something to prove. — I had to prove to myself that love could be eternal.

You see, my parents finalized their divorce the very day we had our second date. (Valentine’s Day, I might add. The world can be cruel sometimes… Moving on.)

As far as anyone knew in our little town, my parents had the perfect marriage. Every adult I knew saw them and told me, they’re the perfect couple, aren’t they? And of course, I would agree. In my eyes, they were. He was the man-of-the-house Super Dad who owned hot rods and took our little family unit out on extravagant vacations. She was the timid housewife Super Mom who cleaned the house, did the shopping, grabbed the dry-cleaning, cooked a gorgeous meal, and poured the wine. They had it all. Until they didn’t. One day, my mom moved out and my perfect world had shattered. How could this happen? What did they do wrong? How can I avoid this in my own love life? My answer? Make. It. Work. (That was the wrong answer, just f.y.i.

It’s weird as an only child to say that, but after my high school boyfriend broke up with me and my parents split in the same year: how could I be alone?

I couldn’t be alone with my thoughts- they were hurtful and loud. Once college boyfriend came into the picture, I didn’t have to be alone. Essentially, I was seriously putting off depression. (Tip: depression does not just go away without you staring it hard in the face first.) I was choosing one toxicity over another. I chose a relationship with him over the painful task of facing my depression and thereby finding love and acceptance of myself. I didn’t know that’s what I was choosing, but nobody is that self-aware. Come on.

Now granted, I learned a ton about myself from that relationship. I know he did too. We’ve talked about all this since. We didn’t know it at the time of the breakup, but we both realized afterwards that we should have broken up months -if not years– prior. When I say I was in a toxic relationship, I was part of that toxicity. I hadn’t healed from my parents’ divorce, so I was this open, spurting wound infecting our relationship. However, it’s been three years since then, and I’m certainly not infectious anymore.

You can’t avoid pain. You can try and numb yourself. You can mold yourself into another person and you can distract yourself with that person, but that’s not healing. You’ll end up suppressing and suppressing until it inevitably boils over and hurts the people around you. I thought that I needed my ex to help me get through my pain. I didn’t. I’m not saying I regret the relationship, though. Alternatively, I’m expressing my gratitude for it. Sometimes, you have to trudge through the mud to get to the clear water.

I like coffee in the morning and tequila at night.