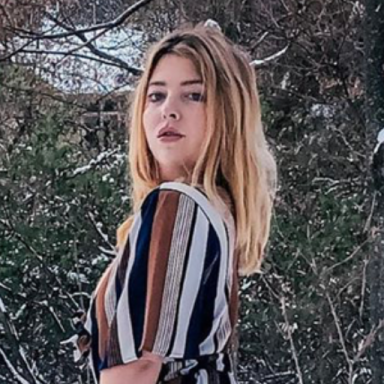 Sofia and I pressed against the thick bark of the tree. I heard the sound of something wet and heavy moving around the rocks of the beach. I imagined something like a massive walrus, dripping and fat, searching for us. The flashlight had fallen still aimed in our direction and suddenly, it went dark.

There was no other option but to go further into the woods. We moved quietly this time, hoping to see the boys, to warn them of what was to come.

But as we crept along, the one thing I kept thinking of was what Sofia had said about the time. Had it really been an hour that felt like a few minutes? Or was she so wrong? We were usually completely in sync, and this made our experience all the more alienating.

It reminded me of a story I’d heard about a man who’d been driving down the road, and his clock had skipped ahead two hours without him knowing where he went. These mysteries happened more than once– many people agreed that they’d lost time, seemingly for no reason. Some claimed alien abduction– others, demon possession.

We came upon a clearing, more illuminated than any other by the moonlight. Stopping for a moment, we listened to hear if whatever had found us by the beach was still following us. We heard nothing.

“It seemed… hurt. Like it had a limp. And it was bigger. Like maybe a bear? An injured bear.”

“I want to get out of here!” I yelled, gripping the bat I was surprised to find still in my hand.

“Hey!” one of the boys hissed from the woods. I couldn’t see them. “Hey come over here!”

I moved towards the voices, but this time Sofia stopped me. She had a confused look on her face.

“Is that Craig or Matt?” she called.

“Over here!” the voice hissed, this time sounding strange, warped.

“Is that Craig or Matt?” Sofia asked louder.

“Hey! Over here!!” This time the hissing was overpowering, and it sounded like a massive gust of wind was rushing for us. We recoiled, and I crouched low to the ground, pulling Sofia behind a large fallen tree on the ground. We ducked our heads, and in a moment heard a sound like a horse running.

The sound of each hoof falling was echoed by a vibration in the pine needle-laden earth. The animal rushed by us, letting something large thud to the ground behind it. Whatever fell rolled before coming to a stop right in front of us. The moment it passed we stood up to see a large, black gourd on the ground. It looked hefty like a pumpkin, but with a spiral neck. We stood frozen, staring at it for a moment before realizing the neck of the gourd was moving, rotating slowly to face us.

“Hey! Over here!” it screeched, a raspy echo of Matt’s voice. We screamed and sprinted, away from the creatures we’d seen. We’d be at the other end of the island soon, surely– it wasn’t too big. I felt tears stream down my cheeks when suddenly we bumped straight into Craig, standing just beyond the edge of the tree line.

Sofia scrambled away from him and I followed suit.

I stared at him. He was staring up at the sky, his head craned at an unnatural angle, throat white in the moonlight.

He said nothing, just kept staring at the moon.

He craned his neck even more, his spine bending backwards. He’d risen to his toes, as if he were wearing high heels. He shuffled backwards a step, losing his balance slightly.

Suddenly, a light clicked on overhead. Maybe twenty feet above Craig, the sudden illumination cast a spotlight over him. He reached his hands up towards it.

And then it came crashing down.

We heard a heavy, metallic thud as the light came down on Craig’s skull, cracking his neck back and sending him backwards to the ground. He posed like a gymnast doing a bridge, and then the earth started shaking.

Sofia and I watched in frozen horror as the ground began to swallow him, his hands sinking deeper, then his head, then more.

It swallowed him whole, and then all was still.

We gasped for breath, the silence bringing us back to life, back to the chill and terror of the island.

“I want to go home,” Sofia said, her voice weak and childish.

I saw a small light glow on the beach, this one far duller than whatever had hit Craig. Tentatively, I stepped forward, to see the cell phone I’d given the boys. The screen illuminated only with the words “No Service.”

I slipped it back in my pocket, looking out over the lake’s surface. It hit me suddenly that I could hear sounds– crickets chirping, the coo of an owl.

As if a whisper fell to my ear, I felt the hairs on my neck stand up slowly. I felt a hand settle on my shoulder, but for some reason I didn’t feel afraid. My mind went blank for a moment, and it felt as though I was in a different place, one where the sun might never rise or set, one where I felt cold and warm, tired and energized, all at once.

The world had a static to it, reverberating electricity that ran through me, that ran through everything. I felt the bugs and birds in the trees, the sleeping rodents in the ground, the wandering animals that we’d heard, whose presence seemed one lasting millions of years. I felt Sofia behind me. I felt the fish resting at the bottom of the lake.

I didn’t feel the boys.

Then my world was different. I had sheets over me, the dewy chill of morning in the air, a pillow underneath my cheek. Sofia lied in front of me, her eyes staring into mine. Her lashes were wet as if she’d been crying.

“We haven’t been here,” she whispered, before the room went dark again.

We didn’t remember everything right away, but over the years more has come back to Sofia and me.

After the boys and their parents left, two black gourds washed up on shore. My grandfather saw them, hauling them onto the dock wordlessly. We never saw Matt and Craig again after that. My grandpa burned the gourds that night. We watched him from our room.

A couple years after we left, police in the area cracked down on a case that would shock the nation. Two brothers had killed their parents, and had been burying more victims in the fields of their farm. Their spree ended in a police shootout that killed them both. You can look up that case.

If you look it up, you’ll see that prior to killing their parents, the boys would kindap young girls and torture them. The survivors of these attacks recounted that the boys were friendly, and had earned their trust, luring them to secluded places with the promise of adventure. The first attack was three months before our experience on the island.

Soon, my grandparents moved. I don’t talk about this with them. I don’t talk about it with Sofia either. There’s something stopping me, like that hand on my back from over a decade ago. I can still feel it, on the rare occasion that I let myself relax.

That hand navigated me through many things. It turned me away from some people shortly after meeting them. Others, it guided me towards. It pushed me through law school, where I’ll be graduating from in the spring.

Some would call it a guardian angel, but not me. It isn’t kind or evil, protective or not. It’s in all of us. It was on that island, and it was in Craig and Matt before they died. It’s in the pet you cradle and the spiders lurking in your basement. It’s in doctors and criminals.

I’ll never go back to the lake again.

I write horror and satire. I save real life for journaling.