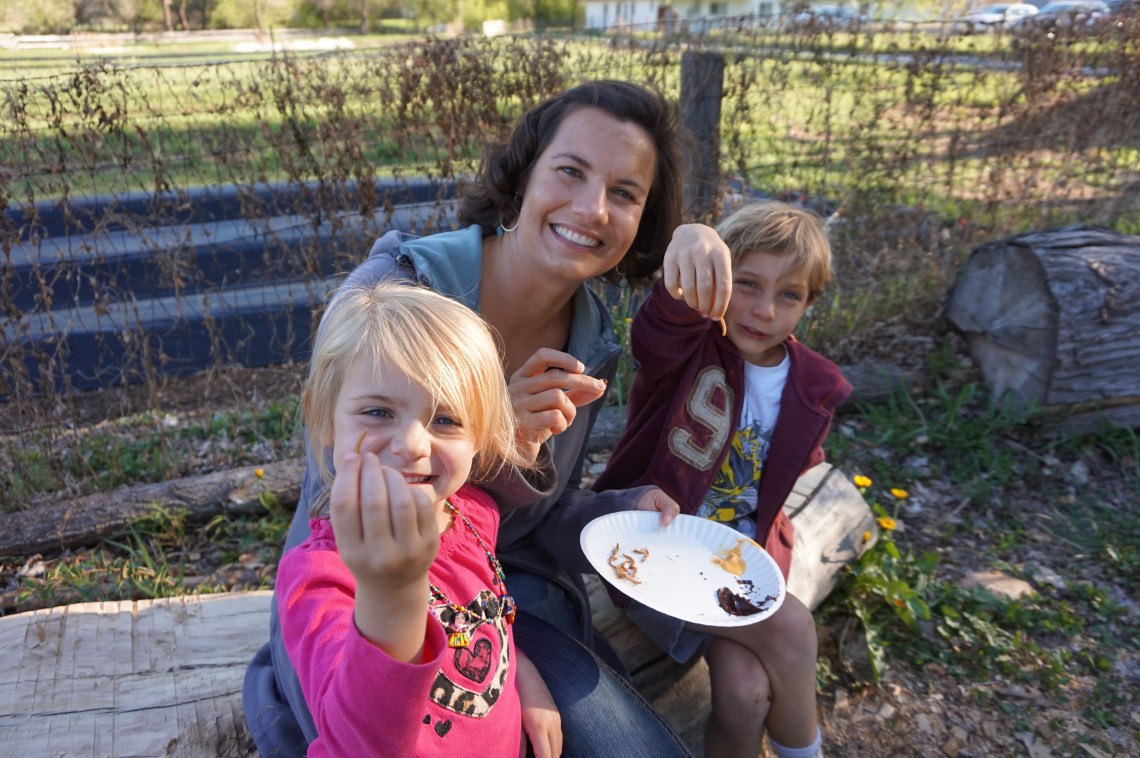 Recently my family took a class where we ate a buffet of creepy crawlers. Gross, right? Admittedly, the experience was a major stretch for us. Even as adventurous Coloradans, it’s never occurred to us to add insects to our diet. But the course was offered by a local gardening nonprofit, and my son, who’s seven, was totally into it. And also, we’d been trying to boost our outdoor survival skills, and who knows when we might be stranded in the wilderness without food? The beauty is that insects are everywhere. So, we showed up.

The presentation was led by two experts from Colorado State University, and I can honestly say I found it much more fascinating and relevant than I was anticipating. I learned so many things, like that insects are arthropods, just like shrimp, crab and lobster. So eating bugs is essentially like eating seafood. This helped tremendously when it was time to put my first meal worm in my mouth….

It turns out that there are many creepy crawlers that are not only edible, but healthy, and the art of “entomophagy” — eating insects — is widely accepted in many places around the world, including Africa, Asia, and Latin America. And now, I can see why, because the bugs tasted much better than I imagined they would. Some of them were even… delicious. This is how I’d describe them:

Chirpy crickets — dead, in this case — were first on the buffet for me, and when I grabbed a few from the platter next to the frying pan and held them between my thumb and forefinger, I hesitated for a long time. But then I popped them in my mouth, and I was pleasantly surprised. They crunched nicely and had mild, savory flavor. Perhaps best of all, they offer a solid protein, calcium, and iron boost, and if you decide to incorporate them into your diet, they’re also easy to cultivate in your home. And because they taste a lot like what they just ate, you can “gut load” them with sweet foods like bananas, and voila, you’ve created your very own gourmet banana popcorn (or something like that).

When the instructors opened a big box of these squirming creatures and asked us to touch them, I kind of freaked out. This was way out of my comfort zone. But I pretended the mealworms were seafood, repeating this in my mind over and over, and I picked a few up, and then tossed them into a pan sizzling with oil. It was so much better when they stopped moving. And interestingly, when it came time to eat them, it wasn’t so bad. I dipped mine in cheese sauce, and they tasted like a flavored nut or seed, crunchy on the outside and softer in the middle. Not wholly unlike shrimp, actually.

I actually had a point of reference for these insects, because I sampled them when I traveled to Oaxaca, Mexico a few years ago. They’re called Chapulines there — a delicacy — and I ate mine with a chili powder when my host family proudly served them one afternoon. I didn’t love them, but I politely ingested several. At the class, I tried something new, coating them in one of my favorite substances on earth: chocolate. It was really yummy! I would do that again, maybe even at a party, adding a port wine to impress my guests. And sort of like crickets, grasshoppers boast so much nutrition, about the same amount of protein as fish and lean ground beef, and they’re also really high in calcium and offer a healthy fat source.

In their native Madagascar, these creepy bugs build their homes in rotting logs, which makes it extra difficult to entertain the idea of eating them. (Sort of like meal worms.)They weren’t available for sample at the class, which did not disappoint me, but they were a popular topic of conversation. In talking with a few participants who’d tried them, they described them as sort of “musty crunchy.” No one really recommended eating them on their own, but they did say they’re perfect to sprinkle on top of a salad or side dish, adding extra protein. Cockroaches, too, can be easily raised in your home. Just put them in an enclosure and feed them fresh veggies, if you dare.

Bacon is all the rage, and although red ants don’t taste exactly the same, when fried in oil, they offer a salty, crunchy texture to a salad, burger, or fries. Plus, they’re so small that it’s easy to forget you’re eating bugs, which is an advantage. Another option is to boil the ants and add them you favorite dish, and they totally blend in. They’re an incredible calcium source, making them ultra-healthy. But it’s important to note that not just any ant will do. Make sure they’re red, or at least scientifically proven to be an edible type. Which brings me to an important note:

If this article somehow inspires you and you decide you want to eat bugs, keep in mind that it’s a good idea to buy them from a reputable source like Fluker Farms online. If you decide to collect them, make sure to do so from an area that is pesticide free.

And finally, and possibly most importantly, there are entire cookbooks containing bug recipes, like this one. It takes creative cooking to a new level. Happy dining!

How To Protect Yourself From Bed Bugs This Summer

Sometimes The Bravest Thing You Can Do Is Admit Defeat

11 Things People With Severe Allergies Want You To Know