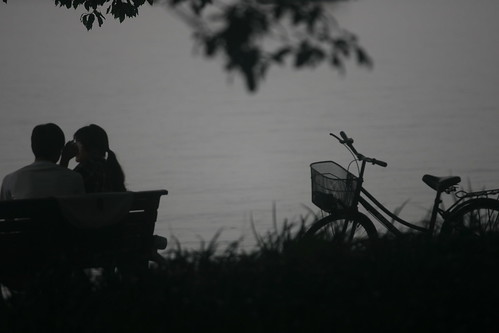 Think back to your first boyfriend or girlfriend (or should I say “boyfriend” or “girlfriend”). Chances are you were around thirteen years old and everything was new, everything was sparkly and exciting and surprisingly simple. How have our dating habits changed in a decade? Read on and decide for yourself whether we’ve made progress or not.

You know he likes you when

Age 13: He lingers in the hallway after school to talk to you before your parents pick you up outside in the parking lot.
Age 23: He sleeps over and makes breakfast the next day (or at least buys brunch).

You know she likes you when

Age 13: She’s thrilled your name is the only one not crossed out during sleepover games of M*A*S*H (and doesn’t care if she also gets “shack”)
Age 23: She reserves a few hours of her precious Friday or Saturday night with you.

Age 13: He steals your pen/gloves/books and runs down the hall with them.
Age 23: He stops by your cubicle and teases you incessantly about your pictures/plants/coffee mug.

Age 13: She actually chases you down the hall to reclaim her pen/gloves/books.
Age 23: She emails you to help her with a “computer problem” that she totally knows how to fix.

Best bet for a first date

Age 13: Local carnival. All the lights, all the stomach-dropping, heart-quickening rides, and best of all: every one of your friends is there so you won’t have to talk to each other alone. Shudder.
Age 23: Cocktail bar. Classy but not too serious, you won’t be sober, and when all else fails you can talk snobbily to the bartender about craft bitters.

You know you’re a couple when

Age 13: He stands by your locker, looks down at the floor, and says “Will you go out with me?”
Age 23: You really never know.

When you describe his good qualities to your friends you say

Age 13: He’s really cute, he’s two grades above us, and he’s on the basketball team!
Age 23: He’s really smart, lives in a one-bedroom with no roommates, and he has a salary!

Age 13: Talking to someone else on the phone at 10:30 pm.
Age 23: Nothing because no one is in actual relationships at 23, only nebulous “Yeah, we’re sort of dating” situations so basically anything goes.

You know the end is near when

Age 13: You’re both on AIM and he/she hasn’t said anything in five minutes and didn’t put up an away message. He’s obviously talking to that skank Tara/she’s clearly flirting with that JERK on the soccer team.
Age 23: After four days of not talking you get a text saying “Sorry I haven’t replied I’ve just been sooo busy with work. Let’s try to meet up next week?”

Worst place to run into your ex

Age 13: Outside the locker room right after gym class when you’re all sweaty and haven’t had time to reapply your Victoria’s Secret Love Spell perfume/Hollister cologne.
Age 23: Outside the bar at 3:00 am when being told you look like Ke$ha would be a compliment.

Age 13: Isn’t that a sports word?
Age 23: Enough tequila to make out with that one platonic friend who’s always been into you.

Next time around you’ll