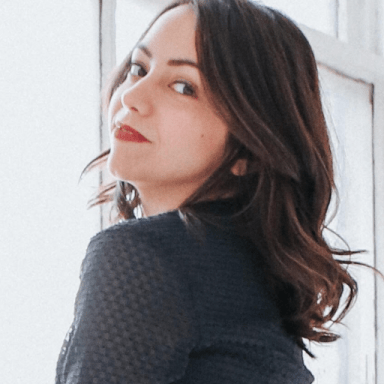 We never hosted Super Bowl parties. I mean, one year I got into your car with a big crockpot of chili to watch the game with your dad in snowy upstate New York. It’s honestly the only Super Bowl I remember spending with you. It wasn’t one of our things. Last year I was at work during the game. This is the first year I actually know what a first down means. And you probably wouldn’t admit it, but we were both more focused on spotting our friends in the commercials than anything else.

And yet this was one of the days I’ve missed you the most since we broke up five months ago. I made it through the holidays without getting too scratched up, and I cried on your birthday, but I knew I would.

I got through my birthday too. My friends really had my back, and I was opening cards and answering FaceTimes the whole day. Before that, I watched my two friends exchange vows on a cliffside by the ocean. I was the maid of honor. Those days should have been a struggle, yet I felt more like myself during them than I have in months. I had headed heartache off at the pass, thinking Ha! I’m doing it. This is me being okay.

But now life is going on. And it’s the little things that sting. We were together for nearly seven years, but now is starting to feel like a pretty reasonable time for you to look for another girlfriend. But even that hurts less than wondering if you would have liked the buffalo dip I made today, or if you would have added more Cholula like you always did. I bet you’re watching the game at your best friend’s apartment tonight. I remember that he keeps the White Claw on the bottom shelf. I always imagined myself being best friends with his girlfriend when we were all in our 40s.

I have extensive conversations with you in my head now. A new development. Sometimes we even get into little arguments—I hear you telling me to be more patient with my parents, talking urgently under your breath when we step into the kitchen to refill the chip bowl. But you would also flick your eyes towards the living room before winding your arms around my stomach and pressing your face into my neck until I caved and promised I would.

If we were together today, we would have ordered from our pizza place down the block. I loved that we were a couple who liked the same pizza toppings and never had to mark our individual territories down the middle of the pie. Pepperoni, green peppers, and onions. A side of wings. And you would have ordered the garlic knots for me even though I would yell at you to stop feeding me so much bread. You would pace as you placed the order on the phone. During hours-long calls with your dad, I would imagine you covered miles within the confines of our cramped one bedroom. You were probably the last person in Manhattan who would rather talk on the phone than check boxes on Seamless.

We fought in the car ride upstate that one year, the crockpot burning my thighs and fingertips, deepening my indignant scowl as I kept my eyes fixed outside my window, avoiding your face. I was a bad sport. On the drive home, you kissed the birthmark on my cheekbone (the first thing you ever noticed about me) and pulled into a Dunkin to buy me an iced coffee for the morning. You knew how I took it, and you also knew that an iced coffee was really all it took for us to be good again. And we went home. To our home.

I felt old when I finally listened to Driver’s License this week. I shamed myself out of admitting to that kind of longing. The anguished TikTok anthems aren’t meant for me. I’m a big girl, right? But today I got it. Right now, life feels like driving alone past your street—our street—over and over and over again.