It began as an accident.

I had not meant to right swipe on Lou.* But as most online daters know, thumbs get tired and accidental swipes will happen.

Lou was nice and all. Just not my type. I am drawn to foreign men with tons of hair, humor, and biting wit.

Lou was American, bald, and didn’t speak in sarcasm.

But months passed, and I continued to go out with him because I was sure the universe was sending me a message — it’s time to stop dating your type.

Maybe that accidental swipe was fate?

Or so I hoped. But relationships sometimes end exactly how they began.

One evening, I lay on the couch entangled in his arms. Bourbon warming my stomach as time slowed to his rising and falling chest. And that is when it hit me — I was actually starting to like someone that was not my type. Best of all, he wouldn’t give me a single thing to write about.

I couldn’t wait to see him again. Emboldened by the bourbon, I did something I don’t normally do. I took the initiative.

“Are you free this weekend?”

Lou’s response should not have raised suspicions.

“I am working this weekend.”

But then I saw the almost imperceptible stiffening of his shoulders and felt his heart quicken beneath my hand.

And there it was. I knew he was lying.

Since I was a child, I have always known when someone is lying. Microexpressions give people away — the involuntary body language that exposes emotions. Microexpressions seep out when you are trying to hide your intentions. The slight nod that says yes when your mouth says no. The feet suddenly shifting toward the doorway when you ask him a hard question. It’s the body’s silent language that sometimes speaks the loudest.

Of course, I immediately assumed the obvious — he either had a date with someone else or just wasn’t that interested in seeing me that weekend.

The next day, I communicated to Lou that I was sensing a lack of interest. I am a big believer in not wearing out your precious Nikes chasing men who are not that into you. But Lou assured me that my spidey senses were off. He then gave me a long speech about how sometimes women don’t think he is interested because he is “shy.”

His reassurance felt cloying. Like when someone covers up a small lie with so many gratuitous details that you know there’s a bigger lie buried deeper.

So I began digging.

Lou lived and worked in Boston. The following weekend, I checked my Bumble app to see if his location showed up.

It did. He was in Washington, DC.

Clearly, Lou did not read my article on how I caught my last ex-boyfriend cheating.

Guys, this is not hard…close your damn Bumble app! If you have the app open in the background, you have an automatic GPS tracker attached to you. And that is the dumbest possible way to get caught in a lie.

Second, we are in the middle of a pandemic. So if you are seeing someone on a fairly regular basis, you really should let them know if you are traveling. Traveling puts you in another level of exposure. And yes, because Lou was a doctor, he had already got his first vaccine. That protected him but not me. You can still infect someone after you have been vaccinated.

Don’t be a pandemic dick.

Once I had the chance to pull my heart out of my stomach, I sent Lou the following text: 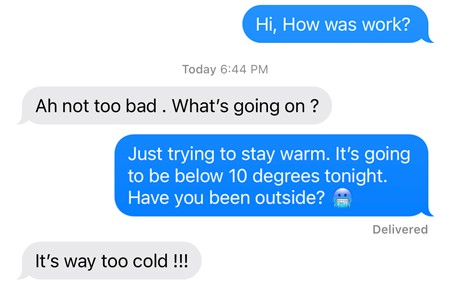 Boston was extremely cold that night. Washington, DC was in the ’40s. And if you live in New England…40 degrees is NOT cold. His lies must have blown in an arctic blast.

I know the adults in the room are screaming — God damn it…just confront him and stop the Machiavellian mind-fucking. But hold that thought, my happily married readers, and allow me to explain modern dating during a pandemic.

Everyone is online now, and that means everyone is juggling multiple people. And everyone also has to be ok with it. Some relationship coaches have even developed color-coded spreadsheets for their clients to keep details about each date straight. This is modern dating.

And when you are dating multiple people, sometimes small lies happen. When that cute guy you are dating asks you how your weekend was, you might say you hung out with your pod. You certainly are not going to say you went on another masked first date. That’s just rude.

But there is something about crossing state lines that falls into a different category of shady behavior. I have gone on my share of online dates with men I later found out were married. When someone is leaving the state AND lying about it, this is almost always an entanglement with an ex or a long-distance relationship he is keeping on the side.

And to be clear, Lou didn’t need to lie to me. He could have said, “I am visiting a friend in DC.” I would not have questioned it because it was none of my business. We had only dated a couple of months and were not sleeping together. I was still going on dates, and I assumed he was too. Bottom line — we had never talked about exclusivity because there wasn’t any need to yet.

As soon as Lou landed at Boston’s Logan Airport, he texted me. (That Bumble GPS tracker is scarily accurate.) And over the following days, he sent a few poking “how are you doing?” texts.

I did not respond. I meant to. I meant to ask him why he lied and have it out once I was in a calmer space. But pathologizing bad behavior gets exhausting. I just didn’t have the emotional bandwidth for it.

I know many will find my actions immature and cruel. I could have given him a chance to explain why he lied. No one is perfect. Blah. Blah. Blah.

But I also know myself well. I know my capacity for forgiveness is boundless. If I had given him a chance to explain, I most likely would have forgiven him. There have been far too many times that I have pushed bad behavior under the carpet only for that dust to settle elsewhere.

It’s a painful lesson we all eventually encounter — liars don’t change. They just get more creative with their lies.

Ghosting is a gray lie. It’s a lie of omission. And many label ghosting as cowardly. But when someone directly lies to you, you don’t owe them your truth or any closure in return. The same applies if there was any abuse or the person violated your boundaries.

I will never know why Lou lied. But if I had to guess…he was probably doing something in DC that would have hurt my feelings. And it might have hurt me enough not to want to continue to date him.

That would have been a tough conversation. He chose not to have it. For my own sanity, I chose to walk away from the needless drama.

It ended with an accident.

*Names changed to protect the undead.