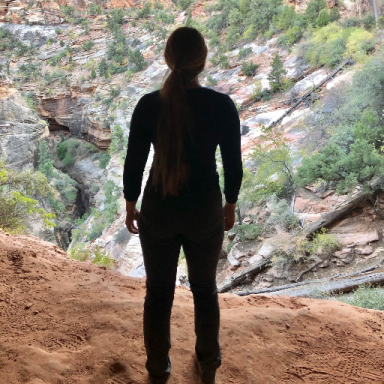 I took a train from Munich to Nuremberg. After I settled into the hostel, I went to a bookstore for a notebook I could fill, a way to find company with my written thoughts. In my parsed German, I was able to find a tiny green spiral notebook (that I have not yet managed to fill three—no, four—years later) and get a recommendation for a coffee shop. Jet lag had made its mark. It was maybe 4 p.m. The sun was still out, striking the old cobblestone streets.

Against my paranoid mother’s advice she had given me before I left for the airport that took me here, to Germany, to Nuremberg, my hair was down, my sunglasses were off. I reveled in the freedom I felt there, a freedom I had forgotten about while spending four years at an institution that required me to keep my hair up in a bun and in uniform. Having my hair down in Germany and contemplating an afternoon beer with my coffee was my version of Rumspringa.

I wandered the streets, contemplating my presence there, thinking about someone back in the states, debating meeting up later with some fellow travelers who had invited me out with them later that night.

A voice in German.

A voice in German, again, accompanied by a shoulder tap.

“No sprechen die Deutsch,” I said to the stranger.

“Ah, English? American?” he asked, with an accent—Arabic, it seemed.

I nodded. When he asked me to dinner; I declined and kept walking, but he followed me and asked again. I had no plans and nothing to lose by goingit was still light out, and he was slight, slim, with no appearance of strength that could be used against me. Nuremberg’s tourist area is very public. And I was here in Germany to broaden my horizons, to open myself to new situations. Wasn’t that why I had decided to travel alone for 10 days?

So we walked, the American and the Syrian, although he noted that he was a German citizen, that he had become one several years prior. He studied medicine. The language barrier was small, just big enough to lead to pauses and repeated phrases, although that was common for me speaking to other Americans, too.

We (he) decided on a dinner spot. I don’t remember what he ordered, except a non-alcoholic beer; he didn’t drink. I remember that he asked me to marry him before our appetizers arrived, and I declined, figuring it was an attempt for him to get an American visa.

Midway through the main meal, he asked again, and I again said no. He clarified that I could move to Germany with him and he’d get me a visa. I laughed.

I asked him why he’d want to marry a stranger, and he explained that it was to be able to spend more time with me and my mind. His argument would have been more convincing if he had seen more than the facades I present to strangers. I barely had a concept of what his facade was, let alone who he truly was.

Yet I stayed through dinner and through dessert. After, we strolled the streets, arm in arm, to anyone else looking like a couple. We found a park bench, and he started to kiss me. I didn’t stop him until I had enough to the extent that I felt dirty, like I was giving into him on something to balance out not taking him up on his marriage, to balance out that he paid for dinner.

I told him I had to be someplace, which wasn’t wrong, I had loose plans with some other travelers I had met at the hostel. More importantly, I wanted to be in a place away from him.

I never saw him again.

After dropping my notebook off at the hostel, I found the bar that my hostel-mates were at. It was just them and the bartenders. Wednesday nights in Nuremberg at quiet little bars are not popular nights, but we drank enough that we ended up in a group picture with the bartenders.

We continued our night at a more crowded night club. In the club, I limited my drinking; I was with other people and I didn’t know them, I couldn’t trust any of them. I started dancing with someone from the hostel, another American named Joe. He tried to kiss me at one point, but I pushed him away and moved to a different group of Germans who spoke English. One, a skinny guy in his twenties, invited me to a party after. There were two other girls in the group who reassured me that the party would be safe, and I was buzzed enough that I accepted. Ten minutes into the drive, I realized the party was farther than I thought. We stopped in a parking lot, where I found out that we were waiting for a bus to take us to a festival—their party—three hours from Nuremberg. When the spoons came out to ready the heroin, I took that as a cue to leave. Without cell phone service and no true sense of where I was, I started walking, hoping to get somewhere safe, preferably alive without any significant traumatic casualty.

And so I walked, alone, cold, lost. Each car caused me to jump a little.

A garbage truck drove by and stopped, then slowly backed up the lane. The driver looked over at me.

It was late. It was dark. I was alone. I was lost. I was scared. I wondered how my absence would be reported, who would notice it first. How long it would take.

He said something in German. I shook my head, not understanding him. “English, sorry.”

“Where are you headed?” he asked.

He offered me a ride. It was a garbage truck, it had a schedule to follow and places to be, and the schedule eased my concern enough that I got in. We talked; he was an immigrant, trying to make a life. He made me take his number just in case I ran into any issues. We drove and talked as best as we could.

I don’t anticipate the kindness of strangers. I expect actions from strangers who are expecting some sort of reciprocation.

He dropped me off just past the gates. As I got out, I thanked him, and he said to call him if I got stuck again.

I never saw him again, but I wouldn’t mind if I did.

A garbage truck driver in Germany shifted my perspective of people.